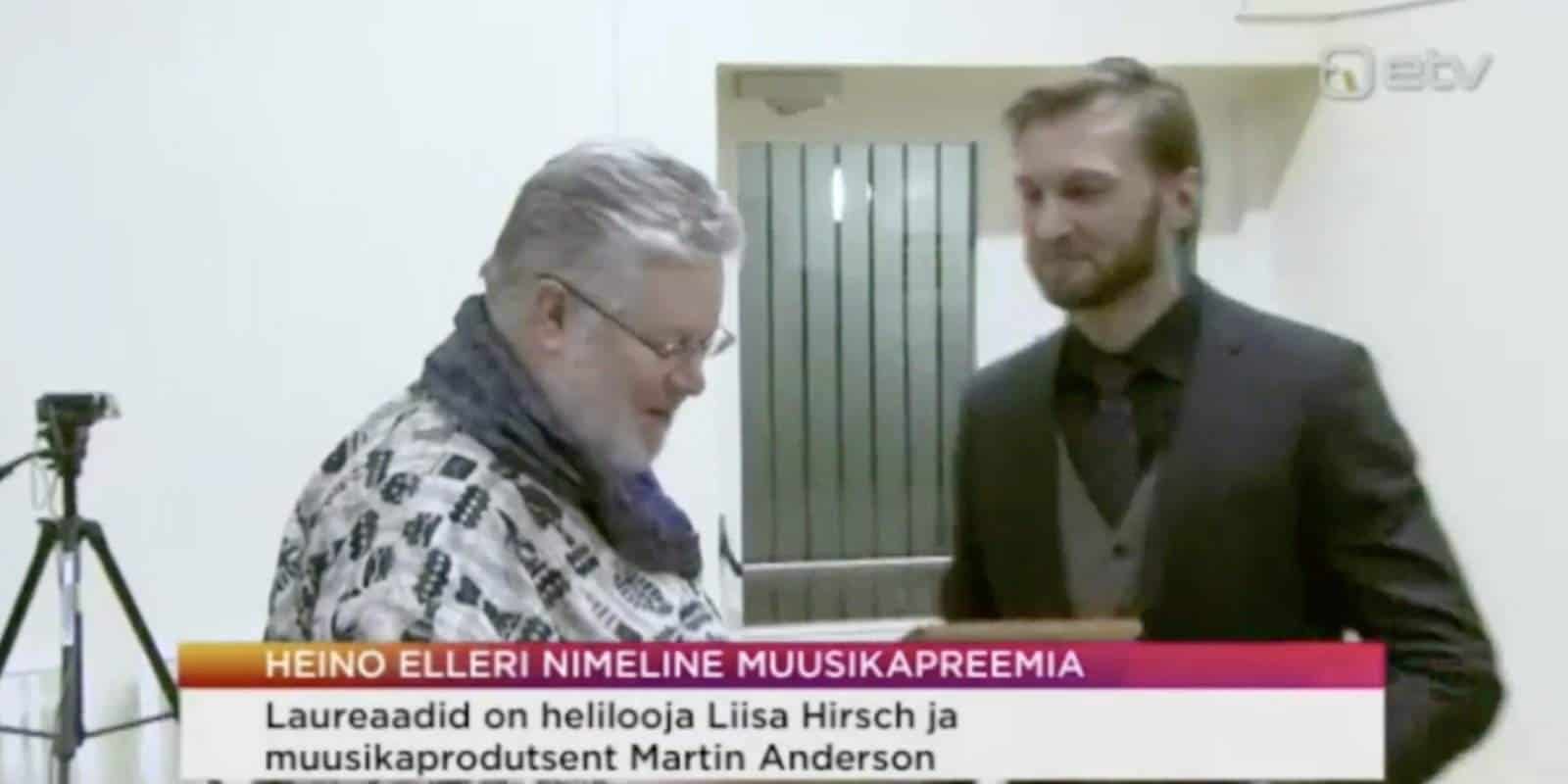 An Estonian Excursion for the Heino Eller Award 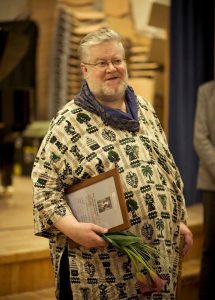 Toccata Classics has now released five albums of the piano music of the Estonian composer Heino Eller – enough for Toccata founder Martin Anderson to receive a convocation from Tallinn.

No one does a job like this for the fame and glory – far less for the money! – and so I was delighted, earlier this year, to receive an e-mail from the Estonian Theatre and Music Museum, telling me that I had

won the HEINO ELLER AWARD for your remarkable work in recording and propagating Heino Eller’s (and generally Estonian) music under the Toccata Classics label. This award will be the first this year and it includes a walking stick made by Heino Eller. Those walking sticks are very unique and only Eller music prize winners will have it.

There was to be a small ceremony in the Museum on 7 March, and please would I (a) come, and (b) not tell anyone, since they wanted the announcement to be a surprise. 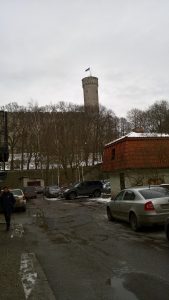 The view from the front door of the EPCC offices, with the Estonian flag flying high above ‘Pikk Hermann’ (‘Tall Hermann’), the mediaeval tower above Toompea Castle

Heino Eller (1887–1970) was one of the two men responsible for building the foundation on which Estonian music still sits today; the other was Artur Kapp (1878–1952). Eller taught in Tartu, Kapp in Tallinn, Eller emphasising important international developments and Kapp insisting on a firm grasp of compositional skills, and these complementary approaches created, double-handedly (if I can put it like that), the generation of composers who taught the ones now at the forefront of musical like in Estonia and far further afield. Erkki-Sven Tüür, for example, is a ‘grand-student’ of Eller’s via Lepo Sumera. You’ll find an outline of Eller’s life here. 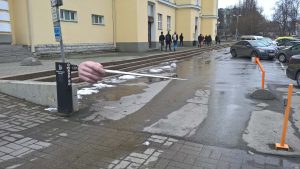 Here’s a clever idea: the barrier at the carpark for the Estonia Concert Hall (I waited for ages for someone to drive through but failed to catch an upbeat)

I had been to the Estonian Theatre and Music Museum on several previous visits to Tallinn, on one occasion when the late Vardo Rumessen, that tireless defender of the Estonian musical heritage, wanted to acquaint me with Heino Eller’s orchestral music. The Museum holds Eller’s legacy of scores and papers (and walking sticks!), and the orchestral works at least then were unpublished and still in manuscript (and probably still are, as the list here suggests). Vardo disappeared for a few minutes and then came back with his arms stacked full of Eller’s manuscripts, which I then had to speed-read. I’m not the best of score-readers in normal conditions, but skimming through some twenty manuscripts in under two hours or some wasn’t entirely an exercise in futility: I did manage to form some idea of the quality of the music and, although this visit took place before I had founded Toccata Classics, I was able to earmark it for attention somehow – and I would naturally record it tomorrow if the resources were available. The fact that it’s still in manuscript and most of it still unrecorded is hardly a reproach to be laid at the door of a wee country like Estonia – although I had a sense on this trip that the omnipresence of Arvo Pärt, as with Sibelius in Finland and Enescu in Romania, runs the risk of being a figurehead which obscures the rest of the ship. 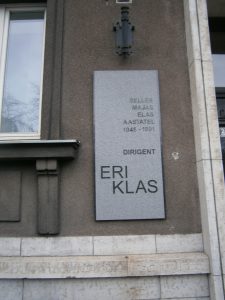 The prize-giving ceremony itself followed a concert given by teenage Estonian pianists, some twenty of them, all playing to a remarkably high standard. Then the composer Liisa Hirsch received her Heino Eller Music Prize and I my Heino Eller Award (which made the national news, briefly). I was asked to give a little talk about my encounters with Estonian music. Then coffee and cake in one of the restored towers of this remarkable building. 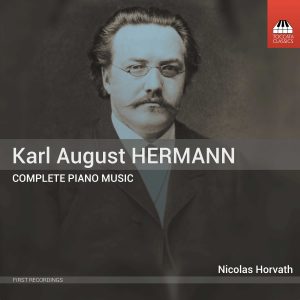 What’s especially pleasing is that this award – the first quasi-official recognition of the work of Toccata Classics from anywhere in the world – should come from Estonia, which has always pulled above its musical weight. There are twelve albums of Estonian music in the Toccata Classics catalogue, and given that we have now released 300, that’s only 4% of our output, but we are far from done with Estonian music yet. Among the other projects in the pipeline is the complete piano music of Karl August Hermann (1851–1909). The sobriquet of ‘Father of Estonian music’ is generally awarded to Rudolf Tobias (1873–1909), who wrote the first Estonian orchestral piece, the first Estonian cantata, the first Estonian string quartet – etc.: you get the picture, and we’ve brought out his complete organ music (Toccata Classics TOCC0288). But Tobias lived and worked mostly abroad. Hermann, a generation earlier, had been a tireless organiser of Estonian musical life, as a folksong collector, co-organiser of the first triennial song-festivals that endure to this day, ethnologist, publisher – and composer. Nicolas Horvath has recorded Hermann’s complete piano music – attractive Grieg-like miniatures that will please rather than astound, but they are the little acorns from which many later oaks have grown. All first recordings, of course (TOCC0418). More on Hermann here. 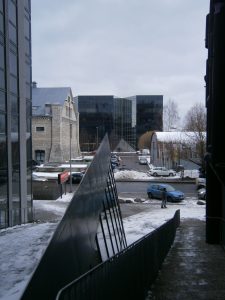 History in a nutshell, in the Rotermann quarter of Tallinn now being redeveloped: imperial salt warehouse on the left, rusting Soviet shack on the right, with cutting-edge (almost literally) modern architecture in the foreground

Anyway, back to Eller. A few years after the launch of Toccata Classics in 2005, when Sten Lassmann, then finishing his doctor-of-music degree at the Royal Academy of Music (special focus: the piano music of Heino Eller), told me that he was planning to record all of Eller’s piano music and asked if Toccata Classics might be interested in releasing his recordings, he was knocking on an open door. Sten’s estimate of the extent of the series was then perhaps five or six albums, but it soon became a standing joke between us that, every time we met to discuss the project, it would expand by another volume. And so it proved on this occasion: being sworn to secrecy about my impending presence in Tallinn, I wasn’t able to plan all meetings I would normally have done, but I did manage to meet Sten who took me out to brunch on my last full day there. And our tradition held good: the complete recorded edition of Eller’s piano music now looks like being a nine-album affair!

After brunch with Sten, I sneaked into the back of a rehearsal at the offices of the Estonian Philharmonic Chamber Choir (Toccata artists, of course, having recorded music by Roses twain, father and son composers Bernard and Gregory: TOCC0284 and TOCC0307), where Tõnu Kaljuste was rehearsing singers from by Collegium Musicale and the EPCC in Veljo Tormis’ classic Raua needmine (recorded on Toccata Classics TOCC0073 by the Swanholm Singers from Sweden), for a memorial concert: all of Estonia went into mourning on 21 January, when Veljo died at the age of 86. A lovelier man you could not hope to meet; you can read him in conversation with me in an article reposted on the Toccata blog here. Then I was off for an interview on Eesti Raadio, a concert of music by Eller (part of the prize ceremony) in the Estonia concert hall, with two Toccata artists, Mikk Murdvee and Sten Lassmann sharing the stage (Mikk is violinist and conductor on two albums of the music of Mihkel Kerem, TOCC0140 and TOCC0173).

Another Estonian album in the pipeline features choral music by Pärt Uusberg (b. 1986), actor as well as composer, in a first programme of his choral music, sung by Collegium Musicale, conductor by Endrik Üksvärav – first recordings here, too (TOCC0331). And it’s only our first collaboration with Collegium Musicale, I hope: we are discussing other Estonian projects, in the hope of having a healthy bouquet of home-grown flowers with which to celebrate the centenary of Estonian independence in 2018.

After the concert, I went over the road to VaPiano for dinner with a friend. I sort of recognised the chap sitting immediately behind me but wasn’t entirely sure where from. A few minutes later, there was a tap on my shoulder, and my neighbour asked if I might be Martin Anderson. It was then that I realised he was Pärt Uusberg, and we were able to have a chat about his forthcoming recording.

A brief but fruitful trip, then, even if I had not been allowed to mention it to anyone in advance. I renewed several musical friendships and began some new ones. My ‘Music For My Love’ project to commission works for string orchestra in my memory of my late partner, Yodit, gained another composer in the form of an old acquaintance, Helena Tulve (I had always meant to ask her anyway). I’ve lined up some more projects for Toccata Classics. And I have a walking stick ready for the time when my days as a dodderer finally arrive. 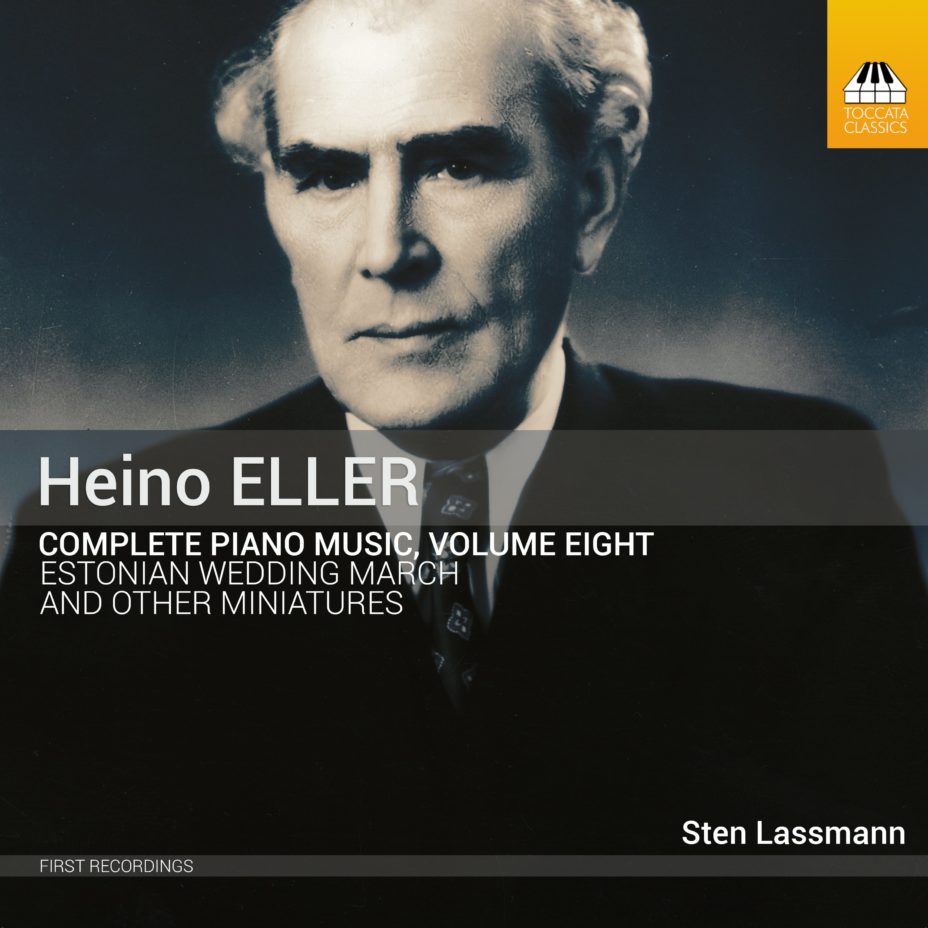 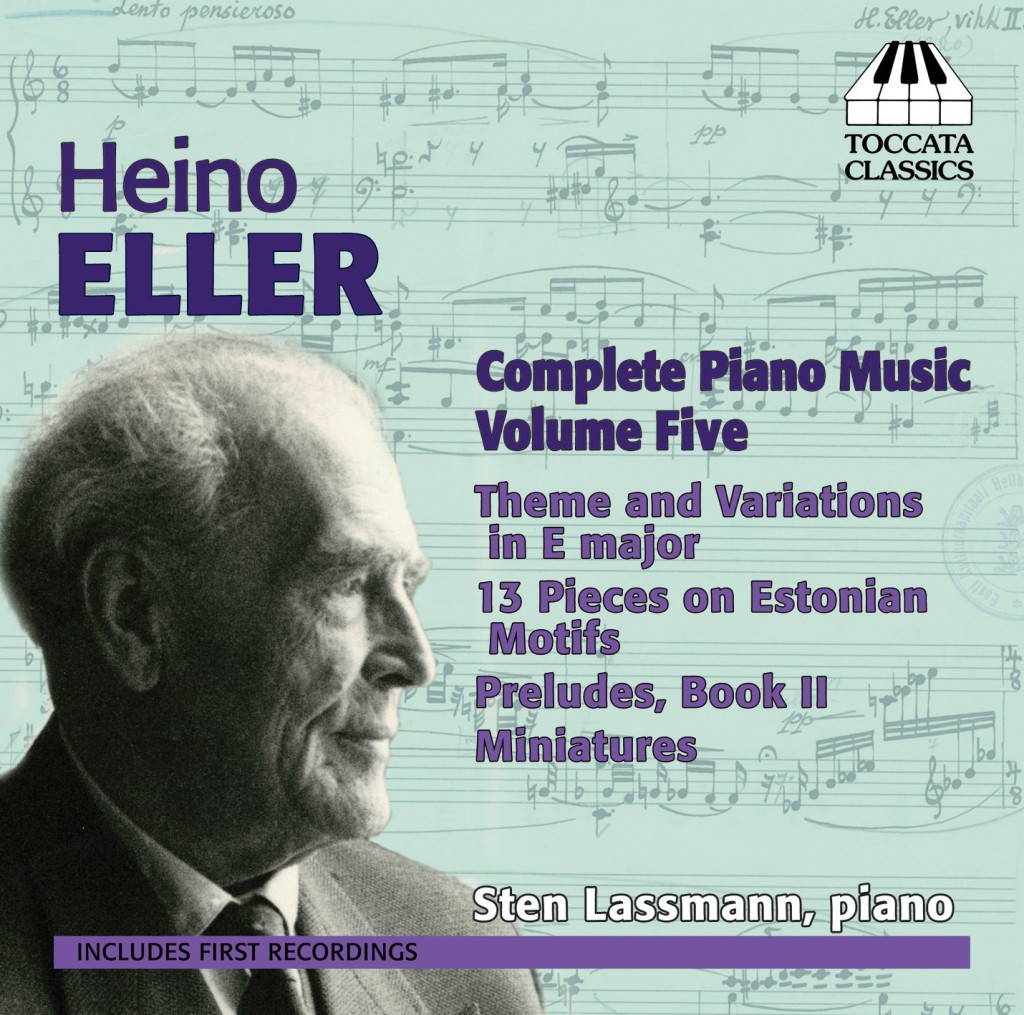 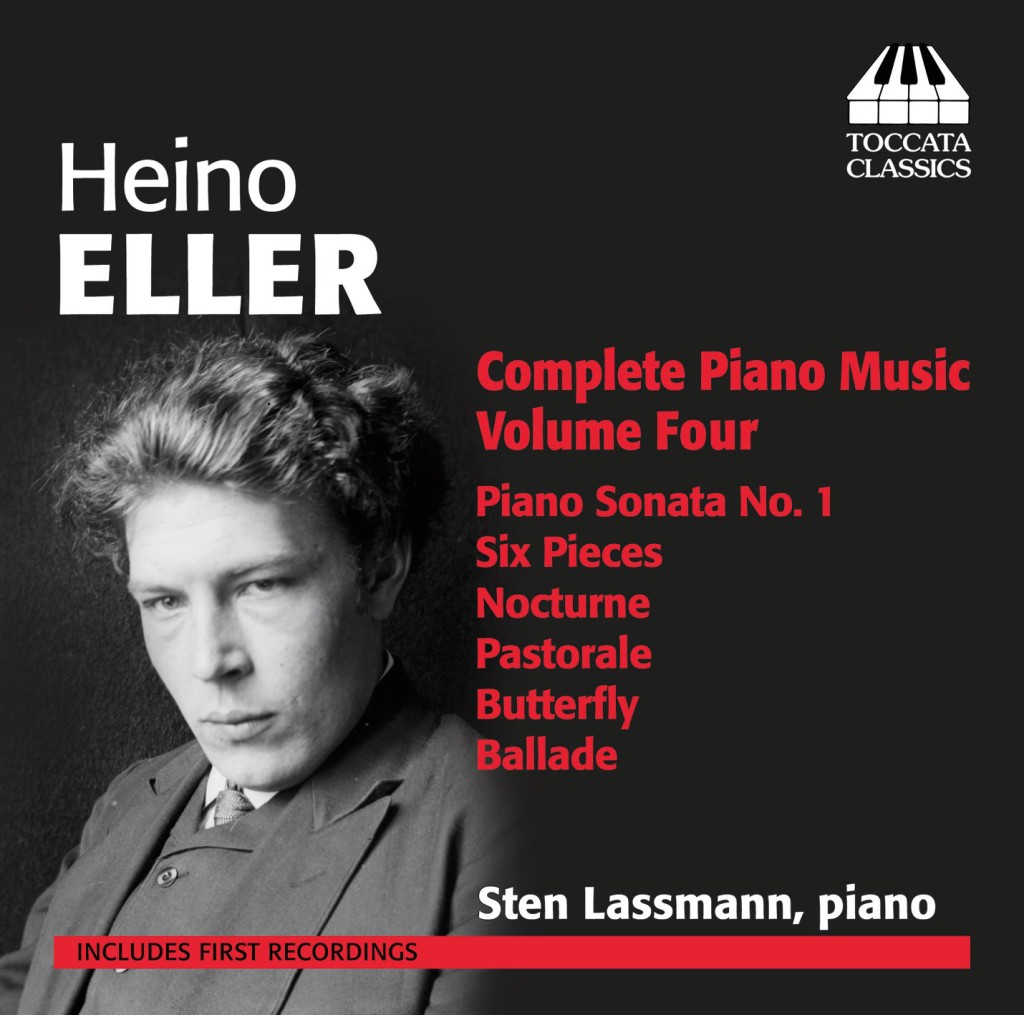 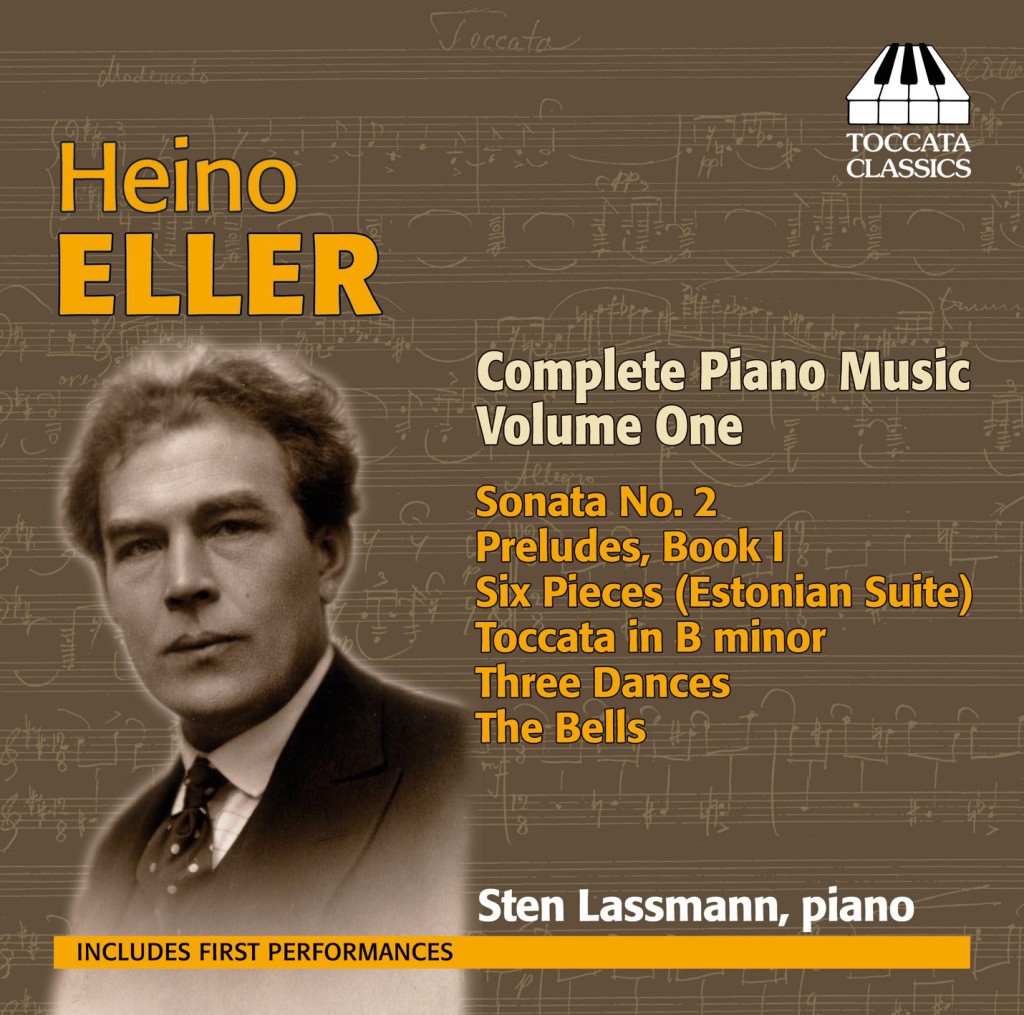 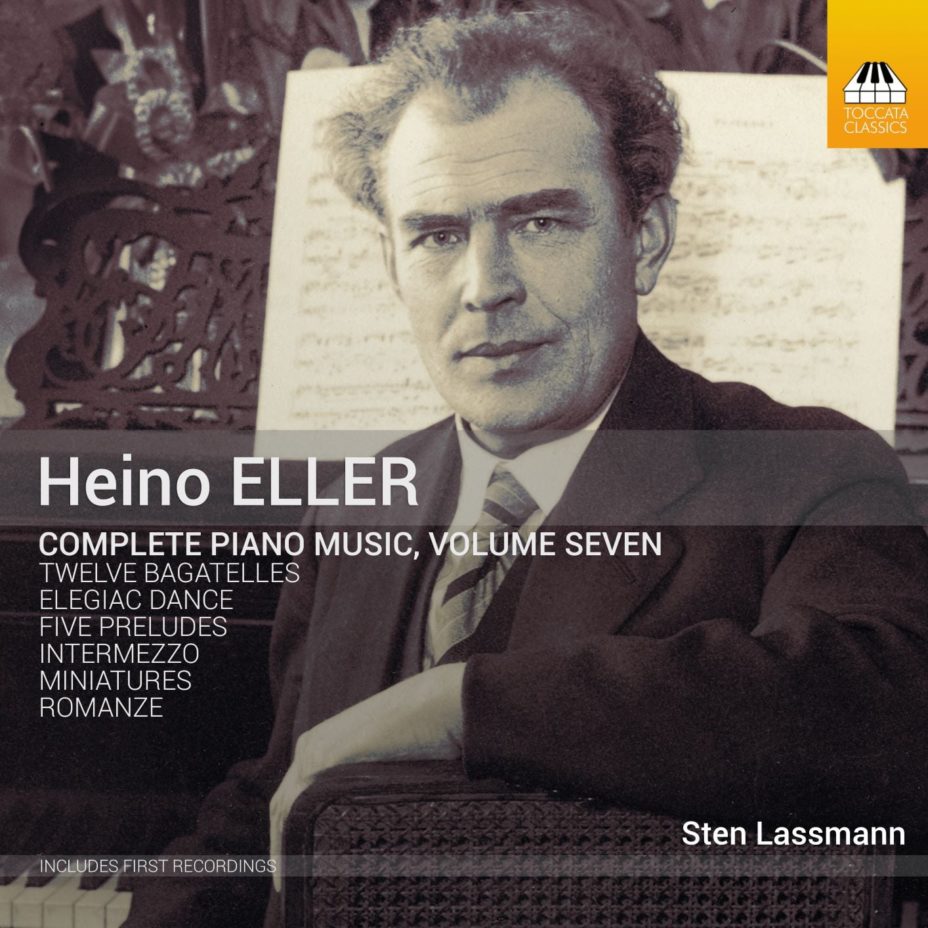 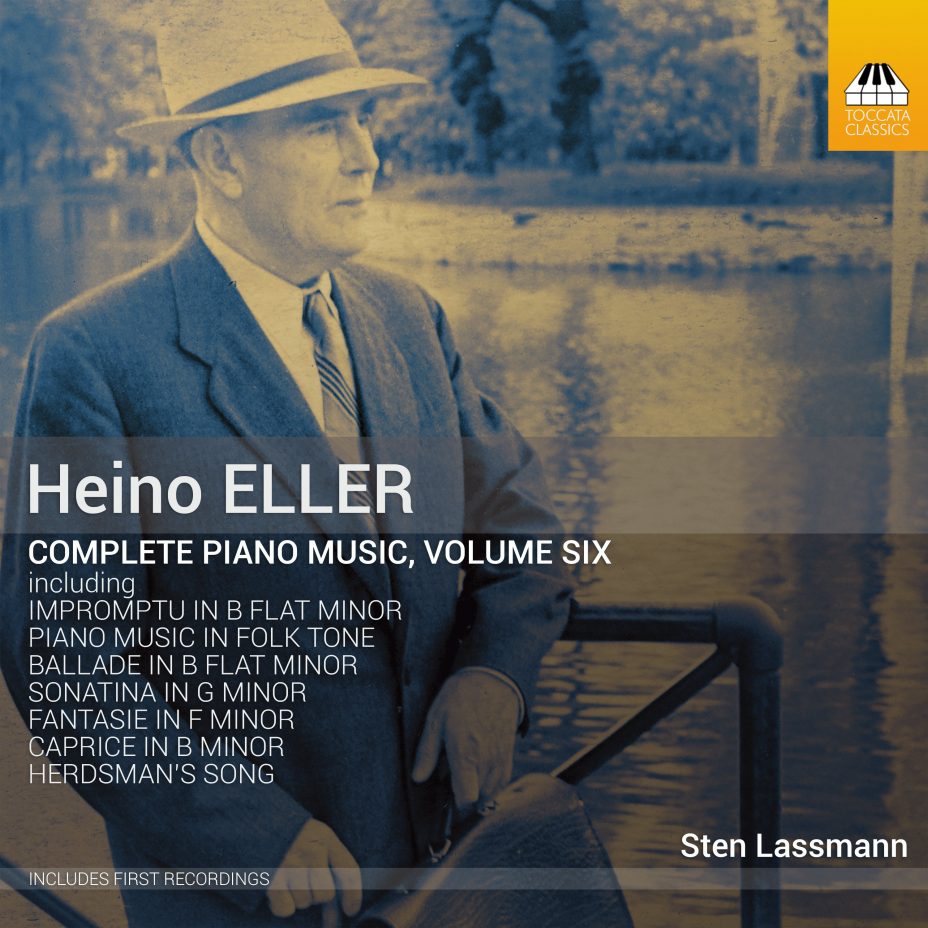 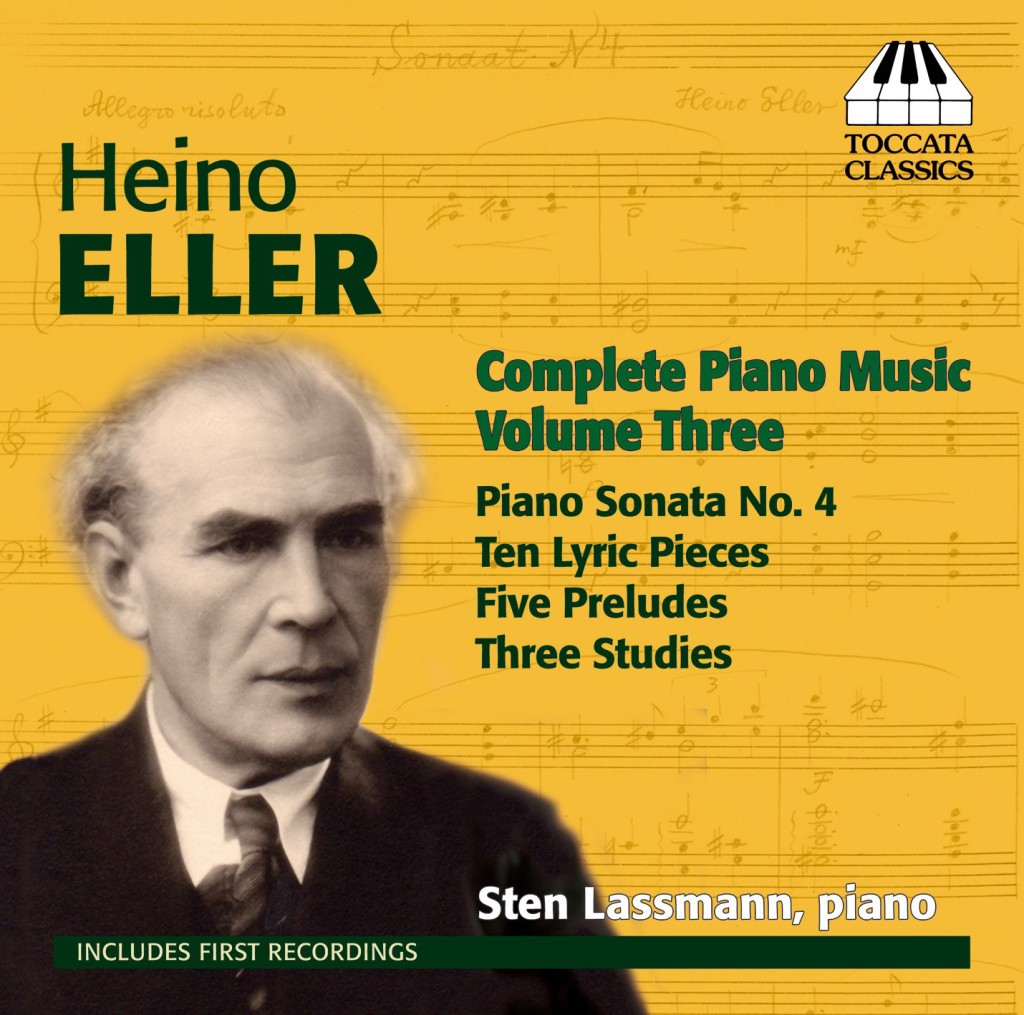 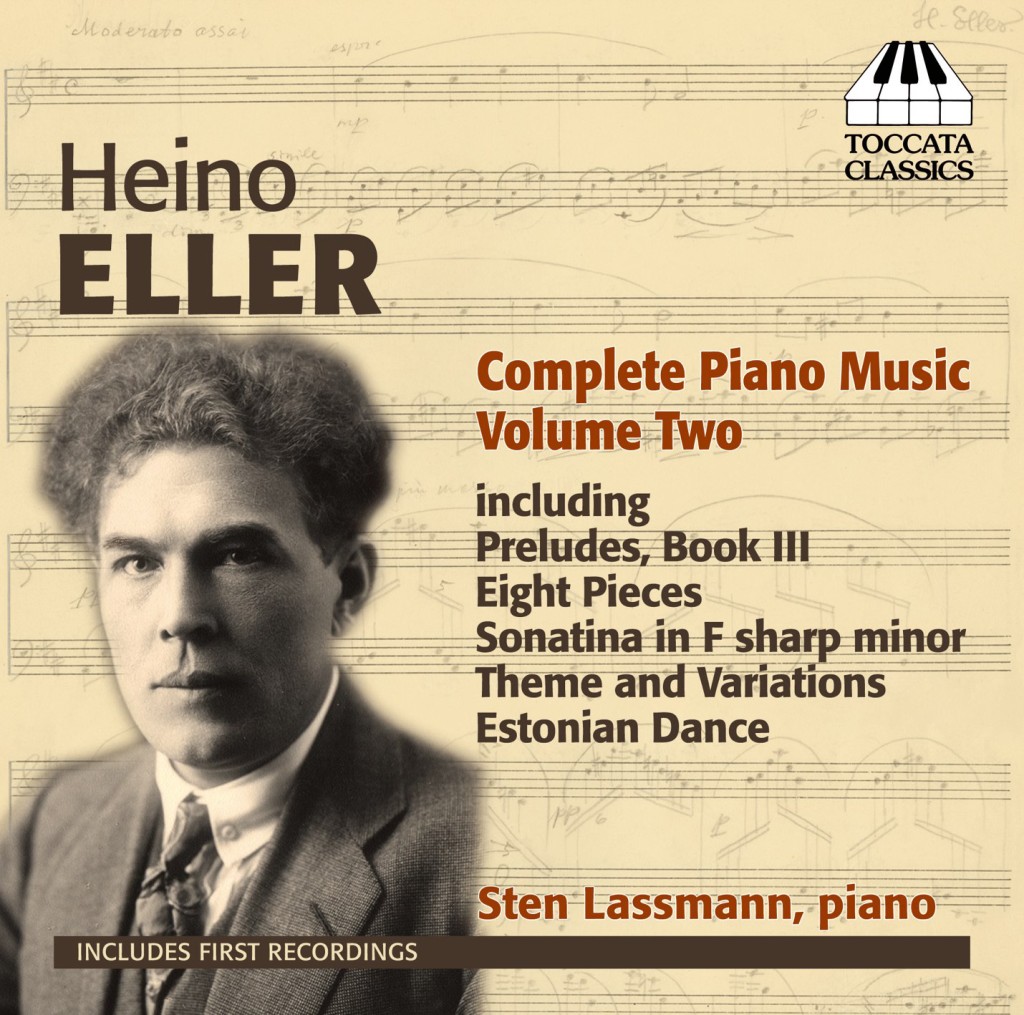 I run the CD label Toccata Classics and publish books on classical music as Toccata Press; I also write a bit about music in various publications in Britain and abroad. My degree (from the University of St Andrews, in 1977 – I’m a Scot) was in mediaeval French and German, and thereafter I worked in economics for twenty years, in London and Paris; I’ve been back in London since 1997. The main thrust of the postings in this blog will be in classical music, but since I am a secular liberal and free-marketeer with a healthy contempt for politics (economics is the study of the creation of wealth, and politics is the process by which it is wastefully dispersed) and a guarded resentment of religion, please don’t be surprised if I occasionally thump the tub on issues other than forgotten composers and other aspects of the musical world.
Categories : Editorial, News, Toccata Classics
Tags : Heino Eller, Music For My Love, Tallin
Previous Post →
← Next Post