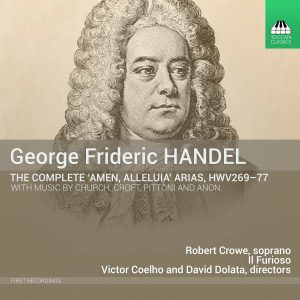 Toccata artist Robert Crowe has penned a guest-blog for the site, The Opera Stage. Read the excerpt below, and continue reading on TheOperaStage.com and hear his extraordinarily dramatic timbres on our new release of George Frideric Handel’s Complete ‘Amen, Alleluia’ Arias recording.

Robert Crowe — Your Voice is Natural to You, So Get Over It: a male soprano’s story

One of the apparently unchanging things about being a singer with an Unusual Voice is that you are often asked to explain not only what it is you do, but, obliquely, what it is you are, by people who have just heard an hour or two of it. While your inner artist recoils at a question that seems to ignore the soul-to-soul communication that you thought you had just accomplished, people are, for the most part, genuinely and innocently curious about someone who appears to exist outside of societal norms. Frequently, to have a rare voice-type is to be under a microscope. Either you are coerced into a position of constant self-justification, or you are cajoled and seduced into never-ending singerly contemplations of self. “My Art, My Music, My Struggle, My VOICE, etc.” You can see where this might end badly.

When I started singing at the age of eighteen, I was an adequate second tenor. No one paid me any particular attention, but I was able to land my first church gig largely thanks to my sight-reading ability. The world continued to pay me very little attention until the age of twenty-one, when my chagrined ego realized that I wasn’t going to be able to have a solo career as an adequate second tenor. I bowed to the inevitable and switched to my somewhat dreaded “other voice,” my countertenor. It was really a male soprano, though at that time neither the term nor the concept was in widespread usage in the U.S. Countertenors in the early nineties were public oddities who attracted all kinds of attention, positive and not so positive.

I was keenly aware of others’ attention being trained upon what I was, or rather, what they believed I was. For myself, I could not yet un-self-consciously inhabit my voice, and it still startled me when it came out of my mouth. An early mock-audition workshop with Carroll Freeman served as a wake-up call. He noticed that, while singing the first few measures of my aria, I was watching my audience watching me. He called me on it, giving me perhaps the most valuable advice of my career, though I didn’t realize it at the time. Namely: accept that your voice is natural to you (or words to that effect) and concentrate upon the music. This leads to my first point. An audience will follow you, regardless of all your supposed oddities, if your primary focus is upon the music itself. Voice is just another physical attribute, after all, transcending physicality only when it communicates not just its own beauty, but the contents of the mind, the heart, and the soul.…