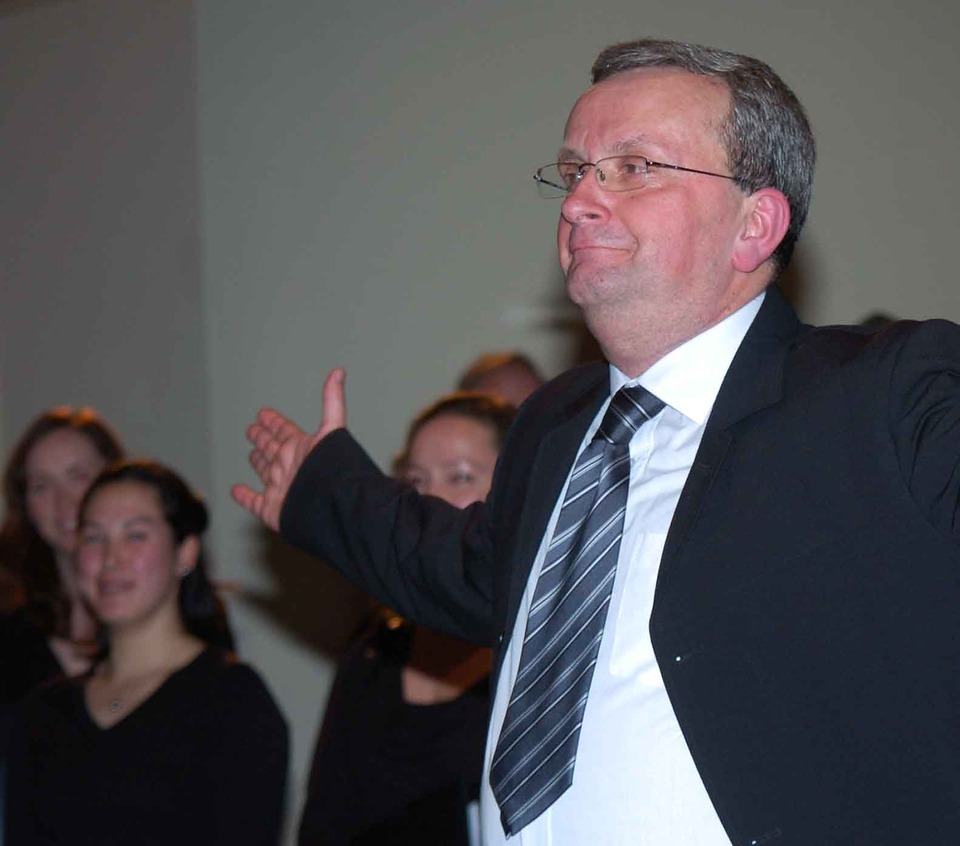 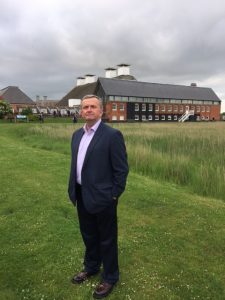 ‘Long Memories’ – the original idea for a book of interviews with senior composers came as the result of meeting and working with two very different composers who I hope will be part of the final publication. I have known Betsy Jolas (born in 1926) for many years but, perhaps foolishly, it occurred to me only earlier this year that I should sit down and talk to her a little about her extraordinary life and her music, which is still too little known in the UK. Over dinner on a recent visit to London, at the end of a day that would have been at best tiring for someone around half her age, Betsy held three of us enthralled with her memories of lessons with Honegger, Milhaud and Messiaen, the literary background of her family in pre-Second World War Paris and their work with Joyce, Stein, Hemmingway and others. Afterwards, I thought: if only I had thought to write some of that down. Austrian-born Joseph Horovitz has lived in the UK for more than 70 of his 90 years and yet there is still an era of 1930s Vienna about this charming and elegant gentleman. While conducting rehearsals for one of the concerts to celebrate his 90th birthday at the Cadogan Hall in London last year, I began to wonder how it was that such a composer would become so well known for his music for television and pieces for that most English of mediums – the brass band – and that I should ask him. And how many other composers could I think of who might be around a similar age, whose memories had not been widely recorded or written down – and maybe I should do something about it. Luckily Martin Anderson at Toccata Press also felt this idea was an interesting one, and agreed with my cut-off age (no youngsters under 80) – and so, with a surprisingly long wish-list, covering well over a dozen countries, the voyage of discovery begins.

The Lithuanian Embassy was immediately enthusiastic about the idea of my travelling to Vilnius to interview their three most prominent senior composers and gave generously of their time, patience and also some financial assistance to make the trip happen. I’m also very grateful to Linas Paulauskis at the Lithuanian Composers’ House, who not only provided the venue for the interviews, but passed on my intentions to the composers and acted as translator for Barkauskas and Kutavičius.

Like all Baltic cities, Vilnius, although very striking and beautiful now, has a troubled past, as was clear from the route I took to walk from my hotel to the Composers House on Adam Mickiewicz Street (I had always thought of the poet and dramatist Mickiewicz as Polish, but he was born in what had been a part of the Grand Duchy of Lithuania). The main shopping street of Vilnius includes not only mobile-phone shops, coffee bars and a branch of Marks and Spencer, but also a museum dedicated to the many victims of Russian persecution, whose names appear on the bricks that make up the outside wall. A few yards up the same street, in a less-than-attractive building by the river, one can see a harrowing collection of mementos, the result of Russian military action against Lithuania in 1991, during which fourteen civilians were killed and hundreds injured. The Composers’ House itself is a venue not only for the storage of scores and recordings but a meeting place, a source of support and, until its recent destruction by fire, a small concert-hall – a venue that will, one hopes, be ready to re-open very soon. Close to the Composers’ House are a collection of small cottages, built for composers to live and work in – a curiously enlightened gesture for the mid-1960s, except one assumes that residence in such a cottage would have been the result of more than a little careful vetting…. 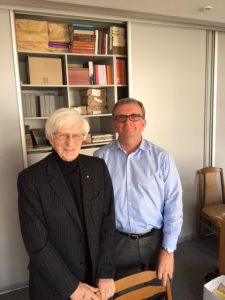 Vytautus Barkauskas, arrived over half an hour early for his interview – elegant, worldly and debonair, he was accompanied by his wife, herself a musicologist who has written a book about her husband: ‘You don’t mind? – we are never apart, my wife goes everywhere with me’, he apologised. Barkauskas has been a prolific composer, his opus numbers now reaching well in to the hundreds and has been championed abroad perhaps more than any other Lithuanian composer, his music taken up by Gideon Kremer, Yuri Bashmet and David Geringas, among others. One piece, his Partita for solo violin, might even be said to have become a modern classic. Barkauskas is still actively composing: one of his latest works is a huge oratorio for massed choruses and orchestra, which he hopes will be premiered next year to celebrate the 100th anniversary of Lithuanian independence. Having heard that I was a choral conductor, we spent a little time listening to another recent piece, a setting of the Agnus Dei for chorus and organ – a work by a Lithuanian composer sung by Lithuanian choir but which didn’t seem so far removed from my own English choral tradition and which to my ears included some distinctly Howellsian chord-progressions. A big jump from Barkauskas’ early experimental language and the influence he admitted of early Ligeti, Penderecki and Lutosławski – one of the many subjects of our interview. We also talked about his earliest musical memories, living and working in Soviet-occupied Lithuania for so many years and what it is that makes a composer want to create at an age when most people have long since retired. 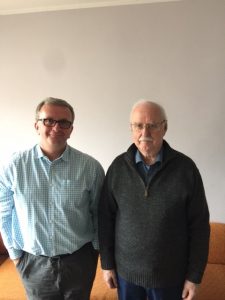 There were some worries about Bronius Kutavičius: he had ‘phoned in sick’ the day I arrived in Vilnius but, as he had promised, guaranteed to be at the appointed place (the Composers’ House again) the following morning – and, of course, he was. He, too, arrived accompanied by his wife, who works for Lithuanian National Radio and TV and ‘makes programmes about culture’ – it’s kind of comforting that such things still happen somewhere! Kutavičius is something of a national hero in Lithuania but perhaps not so well-known outside the old ‘eastern Bloc’. Although clearly in some discomfort as far as walking was concerned, and at first rather shy, perhaps even a little suspicious, after a little while Kutavičius talked easily, animatedly at times, even singing at one point to demonstrate a point and enthusiastically turning the pages of a beautifully produced book about his life, with the most wonderful family photographs going back almost all of his 85 years. Although we spoke for almost two hours, it seemed to be a much shorter conversation: he seemed happy that I had listened to a good deal of his music before meeting him (as if I would not have!). By his own admission, Kutavicius was a late developer, the subject of a good deal of our conversation, along with his love of traditional Lithuanian folk-music and folk-craft and writing music for films. 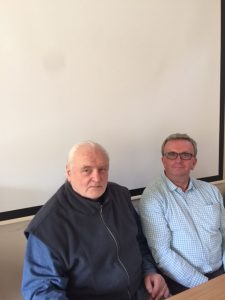 The interview with Feliksas Bajoras, the youngest of the three, took place in a building now used by the Music Academy, which he later told me was originally called, somewhat ominously, ‘Congress Palace’, built in the mid-1980s towards the end of the Soviet era and used by the Communist Party. The long, rather unwelcoming corridors and rooms, even with the languorous sound of a saxophonist playing through the Rachmaninov Vocalise, seemed to have an added chill factor and one can only imagine what might have gone on there in earlier times. Having spent a few years in New York in the 1980s, Bajoras speaks English well enough for us both to be understood. The period in the US came partly as a result of a compositional crisis, after the composition, staging and reception of his opera Lamb of God – the jump from last years of the Soviet occupation to New York was unsurprisingly the source of much of our discussion. Of large, perhaps slightly intimidating, build and looking much younger than his 82 years, Bajoras is known to be a ‘new folklorist’. He has something of a fearsome reputation amongst performers for being pretty direct and for not hesitating to tell them if he thinks they are either not up to the demands of his music or not understanding what he is trying to say. Still, I wasn’t performing, and his answers and conversation were eloquent and fascinating. He wondered if he was over-loading me with ‘home-made’ CDs of his music, but they did help to frame a picture of this many-sided and sometimes controversial composer. After I arrived home came an e-mail with attachments containing the texts of the choral/vocal works he was anxious for me to hear – perhaps not a composer who’s so anti-performer after all.

So that was the first leg in what is likely to be a fascinating journey, not only around the world, but also down lots of memory lanes. For more of the contents of our conversations, you’ll have to await the publication of the book, I’m afraid – and we have some more funding to raise first. But we’ll keep you apprised of the progress of the project with reports here.

David Wordsworth studied at Leeds University, the City University, London, and the Guildhall School of Music and Drama. After a period of teaching he held senior positions at two major music publishers, Schott and OUP, developing close working relationships with a wide range of composers, including Dutilleux, Henze, Ligeti, Penderecki, Shchedrin and Tippett and, more recently at OUP, Gerald Barry, Michael Berkeley, Bob Chilcott, Gabriel Jackson, Cecilia McDowall and John Rutter. He has been Music Director of the Addison Singers since 1995 The Addison Chamber Choir have, under his direction, played important roles in a large number of festivals. Recent months have seen the release of two major choral anthologies edited by David and a CD of the first recording of Sir Lennox Berkeley’s Stabat Mater on Delphian Records, with David conducting the Marian Consort and the Berkeley Ensemble.
Categories : Guest Blog
Tags : book, David Wordsworth, Interviews, Lithuania, Long Memories, Toccata Press
Previous Post →
← Next Post