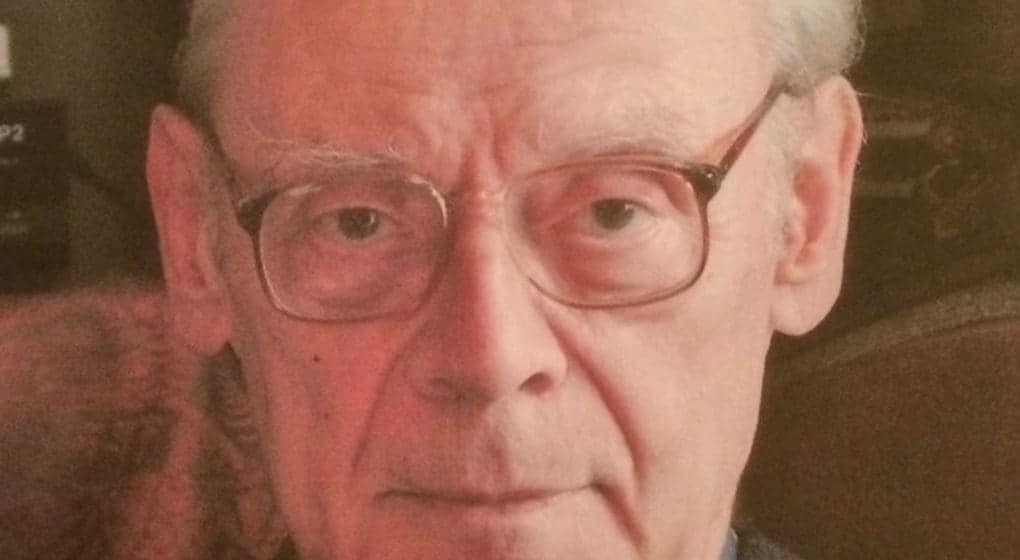 A Tribute To Pascal Bentoiu 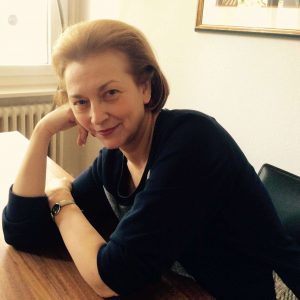 Pascal Bentoiu’s soprano daughter, Ioana, who will be singing at the Romanian Cultural Institute on 7 April

This Friday, 7 April, the Romanian Cultural Institute in London plays host to the first of two events paying homage to Pascal Bentoiu, one of the most important figures in Romanian music since the death of Enescu: Bentoiu’s daughter, the soprano Ioana Bentoiu will sing some of her father’s songs, as well as some by Schumann and Enescu’s exquisite Sept Chansons de Clément Marot (the other event is on 29 April, with a performance of Bentoiu’s completion of Enescu’s Fourth Symphony). And between the two, a photographic exhibition on Bentoiu’s life and works will be running in the Institute.

I had the pleasure and privilege of meeting Bentoiu on a visit to Bucharest in 2007. I was there to make some recordings: that project went pearshaped, but the resulting acquaintance with Bentoiu was ample compensation. He was, in my experience, a softly spoken man with a quiet but sharp sense of humour; Romanian society is generally a fairly polite affair and he seemed to be relieved to able to drop the usual formalities and just talk about music.

Much of that talk was about Enescu, of course, and I was delighted when he gave me an inscribed score of his completion of Enescu’s symphonic poem Isis. Equally naturally, we talked about what Toccata Classics could do for Pascal’s own music – and then a few years later Romanian Radio partially solved the problem as far as his symphonies are concerned with its release of all eight works in a boxed set of their own recordings (several of them rather old), which Pascal sent me when it was issued. They’ve not been brought out commercially, of course, but that set sits ill with our first-recordings policy here at Toccata Classics and rather puts them out of our reach. I did discuss with Romanian Radio the release of a CD bringing together Pascal’s completions of Enescu’s Fourth and Fifth Symphonies, and my dear friend the late Malcolm MacDonald was looking forward to writing the booklet text – but it ran into a snaggle of Balkan bureaucracy and we were beaten to the draw by CPO. Indeed, since CPO is unencumbered by our purist approach (every Toccata Classics release must feature at least one first recording of some kind), perhaps there’s the label to produce new recordings of Pascals’s life-enhancing symphonic output.

The recording project that brought me to Bucharest was supposed to be of hitherto unrecorded Enescu chamber music, and one of the works on the list (three recordings have been released since then) was Pascal’s completion of the A minor Piano Trio that Enescu sketched out over a weekend in March 1916 – although Pascal told me he was sure, from the stylistic evidence of the music itself, that Enescu had composed the work in 1911 and had merely written it down in 1916: he had carried it around in his head all that time.

The manuscript is not easy to decipher: ‘It took me six months to do it’, Pascal told me, and then his voice became more serious as he insisted: ‘But every note is by Enescu’. The Trio is a transitional work, retaining some of the spontaneity of Enescu’s earlier music but nodding at the obliquity of his later style. Compositional archetypes tend towards the symmetrical and architectonic (say, Bruckner) or the assymetrical and evolutionary (Debussy, perhaps). Like Sibelius, Enescu managed to steer a middle path between those two extremes, building architectural outlines with rhapsodic, evolving material, and the Allegro moderato first movement of this Trio is a classic case in point. One might expect that a composer like Enescu, a natural contrapuntist with a gift for handling ductile material, would naturally take to variation-form, but there are very few variation-sets in his output, and the following Allegretto con variazioni is the last formal set of variations he was to write – although, of course, informal variation was a near-constant element of his compositional technique. The spirit of Romanian folk-music, too, is never far from Enescu’s music but the dancing enthusiasm of the closing Vivace amabile is the more striking for the contrast with the funeral march that precedes it. 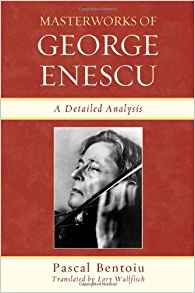 The cover of Pascal Bentoiu’s Masterworks of George Enescu, ‘probably the most satisfying book on music I’ve ever read’

In 2012 Pascal Bentoiu’s Capodopere enesciene was published by Scarecrow Press, as Masterworks of George Enescu: A Detailed Analysis, translated by Lory Wallfisch – a hefty purchase at £80, but worth every penny: it’s probably the most satisfying book on music I’ve ever read. I gave it a lengthy review in Tempo, writing in my introduction that:

Bentoiu – whose own worklist includes eight fine symphonies and six string quartets – understands Enescu like probably no one else, and he patiently works his way through the bulk of Enescu’s œuvre piece by piece, shining the gentle light of understanding on everything in his path, offering a constant stream of insights that put an unerring finger on the pulse of each piece. Bentoiu’s ability to identify the chief characteristics of each work and isolate the processes that animate it brings the kind of revelation that quickens the pulse; I can imagine few people, no matter how well they know Enescu’s music, not deriving pleasure and understanding from Bentoiu’s profound perception. 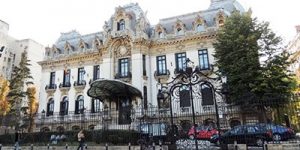 The Palatul Cantacuzino in Bucharest: Enescu’s home and now the home of the Enescu Museum, and the venue for the first recording of the A minor Piano Trio

Pascal Bentoiu died last year at the age of 88, and (as far as I know) without much interest being shown in his own music in recent years – except, I’m pleased to say, that I had agreed with a leading Romanian string quartet that they would record his six string quartets (but I hear they’ve been signed up by another label now and so I’ll have to find another group interested in taking that project on board). That first recording of his completion of the Enescu A minor Piano Trio was made in the Enescu Museum in Bucharest, on Enescu’s own piano – not, perhaps, in the most glorious condition when we made the recording, but at least it has a direct connection with the composer. Since I wasn’t either able to complete the Enescu chamber-music album nor get Pascal’s quartets recorded while he was still around to enjoy it, the least I can do is offer the recording of the Piano Trio here (see below), free, as a tribute to the memory of two wonderful composers. The musicians here are Mioara Moroianu, violin, Laura Buruiană, cello, and Viniciu Moroianu, piano, and it was recorded on 4 March 2007 by Erika Nemescu.

I run the CD label Toccata Classics and publish books on classical music as Toccata Press; I also write a bit about music in various publications in Britain and abroad. My degree (from the University of St Andrews, in 1977 – I’m a Scot) was in mediaeval French and German, and thereafter I worked in economics for twenty years, in London and Paris; I’ve been back in London since 1997. The main thrust of the postings in this blog will be in classical music, but since I am a secular liberal and free-marketeer with a healthy contempt for politics (economics is the study of the creation of wealth, and politics is the process by which it is wastefully dispersed) and a guarded resentment of religion, please don’t be surprised if I occasionally thump the tub on issues other than forgotten composers and other aspects of the musical world.
Categories : Editorial, News
Tags : download, George Enescu, Pascal Bentoiu, streaming
Previous Post →
← Next Post