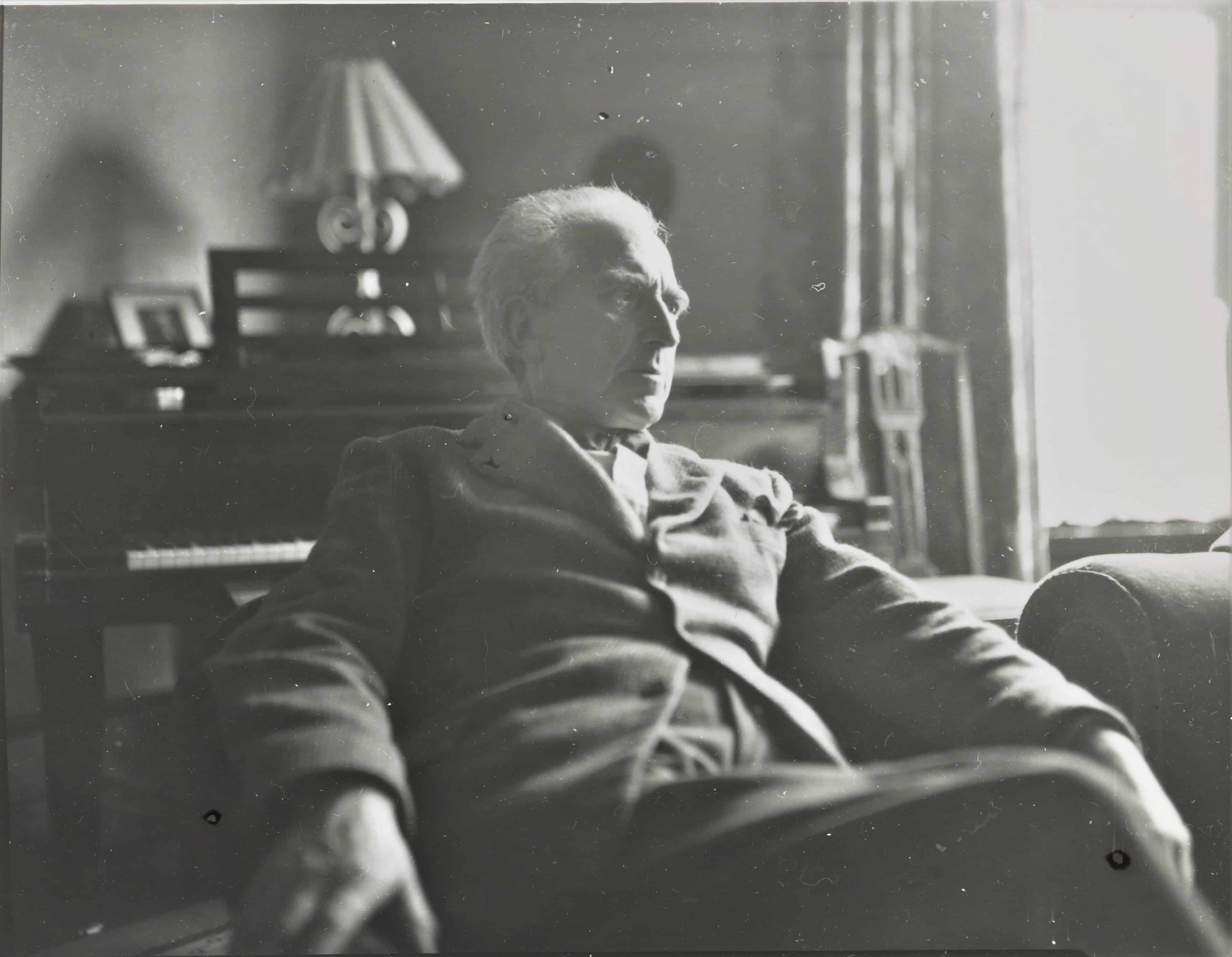 Two years after I began to record it, the first-ever album of Francis George Scott’s piano music is now available. The programme as it appears on the album (Toccata Classics TOCC 0547) happened with little planning, and by happy accident. On Sunday, 17 February 2019, Adaq Khan and I once again returned to the Turner Sims Concert Hall, Southampton, to record number four in an ongoing series of recordings by Ronald Stevenson (1928–2015). I’m not sure how we achieved the bulk of this recording on the first day, although we had planned and booked two separate days for the job. I was pleased to have got it over and done with (I get impatient when recording), but was aware of the potential waste of money in not using the session booked for the following Sunday. A bulb went on above my head: I had recently learnt all of Stevenson’s Eight Songs of Francis George Scott to play in a recital scarcely three weeks before. A quick bit of maths revealed that these pieces together with a recent discovery, namely original piano music of Francis George Scott’s, would add up to a full album in its own right. Home I went to practise for a week.

My awareness of Scott’s music began in late 2012, and, as with several threads running through my musical career, it was all down to Toccata Classics. I was encouraged by Martin Anderson to prepare and record Ronald Center’s piano music. At the time it was difficult to hear Center’s music because of the scarcity of recordings – but, Murray Maclachlan, in 1990, had recorded and released an interesting piano recital on Olympia, Piano Music from Scotland, inwhich he had put the Center Sonata and Six Bagatelles, Op. 6,together with two original works of Stevenson and transcriptions of eight of Francis George Scott’s songs. I wasn’t to engage properly with Scott’s music for a good few more years, but I remember listening to these pieces at the time and thinking they were worth taking seriously.

I was to recall F. G. Scott a few years later, after deciding to take on the cause of Stevenson’s piano music. At the time I was focusing on Stevenson’s Scottish-themed works, simply because, at the time, they seemed like an important discovery, as well as being fine piano pieces in their own right, and I was puzzled as to why they weren’t being taken up by other pianists. In reading what I consider one of the finest pieces of writing on Stevenson, Malcolm MacDonald’s Ronald Stevenson: A Musical Biography, written to mark Stevenson’s 60th birthday (National Library of Scotland, Edinburgh, 1989), I found Scott’s name again, now with considerable emphasis on how important a figure he had been to Stevenson in inspiring him towards cultivating a consciously ‘Scottish’ style of composition – he seemed to have been a prophet of the kind of Scottish music Stevenson wished to create.

To gain a better understanding of this influence, I went looking for Scott’s music, and found Moonstruck,a recital of his songs recorded for Signum Classics (SIGCD096) by Lisa Milne, Roderick Williams and Iain Burnside. It was the turning point for me. Initially. I thought many of these songs were fine settings of Scottish folksongs – but they are all, every one of them, original compositions, and, for me, they cry out for just about every superlative I can think of. Scott assimilated the folk-music of the western highlands and the pioborachead (classical music of the Great Highland Bagpipe) so thoroughly so as to transliterate it into a western classical idiom, in a way that no one had done before. Some will argue that Hamish MacCunn and other nineteenth-century composers aim to do as much, but I don’t think it was ever done in quite the way Scott managed.

Soon after, I discovered Maurice Lindsay’s 1980 biography of Scott, Francis George Scott and the Scottish Renaissance (Paul Harris, Edinburgh; out of print) – still the only text of any length and depth on the composer which also explores, inter alia, his literary influence on Hugh MacDiarmid. I was pleased to find that Lindsay briefly discusses some piano pieces, all miniatures, and so it was only a matter of time before I went looking for those as well. It’s a curiously critical book (in the negative sense), which is disappointing, given that it’s the only full biography of the composer in existence, but invaluable for the raw facts of his life and work contained therein. Still, Scott deserves a better book than this one.

None of Scott’s piano music is published. But to my unalloyed delight, I discovered that the Scottish Music Centre in Glasgow holds the manuscripts, of which I could buy facsimiles – and I bought everything I could. I played through it all, and decided that I could use much of it in recitals and, perhaps, even include it in a future recording project. And here we are now.

This album begins with those eight Stevenson transcriptions of Scott’s songs. They point to the backbone of Scott’s output: the corpus of songs which is his most important output. In their original form they set texts of MacDiarmid and Burns, and the booklet essay goes to some length to explain the relationship between the text and the music, so as to offer a programme to those listening to them in their transcribed form.

The album then goes on to the real reason it was made: more than 60 short album-leaves and miniatures, all within the grasp of the amateur pianist. They are charming, moving, beautiful, amusing, enigmatic – and often unfinished. Many of them were clearly sketches, and together add up to being a musical scrapbook of ideas which could have been developed into bigger pieces, had Scott been so inclined. They are a precious document of the musical musings of an original, pioneering mind. They should be published, and soon.

I owe thanks to a number of people and institutions:

Future plans with Toccata Classics? Ronald Stevenson: Piano Music, Volume 5 (TOCC 0606) recorded late this summer (a programme of transcriptions of Purcell, Delius and van Dieren), and scheduled for release in 2021. Then the rest of Ronald Center’s piano music, as much of William Moonie’s piano music as I can lay my hands on, and all of William Wordsworth’s piano output, in parallel with the exploration of his orchestral music underway on Toccata Classics. All being well, you’ll be able to hear the outcome of these adventures over the next year or two.

Scottish pianist Christopher Guild is in demand as a recital artist, concerto soloist and collaborative pianist, with concert engagements taking him across the UK. Performances have included those given at St James’ Church, Piccadilly, the Wigmore Hall and St John’s, Smith Square in London, as well as numerous recitals for music societies under the auspices of the Countess of Munster Musical Trust. His concerto appearances have seen him work with conductors such as Siân Edwards, as well as with numerous non-professional orchestras. He has recorded albums for Champs Hill Records as a duo pianist and for Toccata Classics as a soloist and duo partner.

As a chamber and ensemble musician, he appeared as a Park Lane Group Young Artist at London’s QEH Purcell Room and the Wigmore Hall, and was also a Parkhouse Award finalist in 2013. He appeared as part of the Royal Greenwich International String Quartet Festival, also in 2013. He worked with the composer Judith Weir towards performances of her solo piano work The Art of Touching the Keyboard and the British premiere of her piece for mixed ensemble, Blue Green Hill. He has made live appearances as a collaborative pianist on BBC Radio 3’s In Tune, and his performance of Haydn’s B minor Sonata at the Purcell Room for the Park Lane Group in 2015 was likewise broadcast by Radio 3. He has also featured as an orchestral keyboardist with the London Philharmonic Orchestra and City of London Sinfonia in works by Philip Glass (the European Premiere of Icarus at the Edge of Time), Franz Schreker and Alfred Schnittke. His extensive repertoire ranges from the sonatas of Beethoven, through Stockhausen and Carter, to the present day.

In recent years, he has turned towards writing and teaching. His articles on Scottish classical music have appeared in iScot magazine, and he was invited to present classical music inspired by the Scottish Literary Renaissance in the annual conference of Musica Scotica in 2019. For several years he was on the full-time staff of the Godolphin School, Wiltshire, as Accompanist and Head of Instrumental Music, and since 2018 has taught peripatetically at Salisbury Cathedral School, Millfield School, Reigate Grammar School and at Junior Trinity, London. He is now on the visiting music staff of Dean Close School in Cheltenham, Solihull School in the West Midlands and the Gloucestershire Academy of Music.

Born in Scotland in 1986, Christopher Guild studied piano and violin before entering St Mary’s Music School, Edinburgh, at the age of thirteen. He took top honours in the 2001 Moray Piano Competition – he remains the youngest winner to this day. He entered the Royal College of Music in 2005 as a Foundation Scholar and studied for six years with the late Andrew Ball, gaining a First Class BMus (Hons), and the MMus and Artist Diploma with Distinction. He went on to be the Richard Carne Junior Fellowship in Performance at Trinity Laban Conservatoire of Music and Dance in 2012–13.

‘The rhythmic vivacity and crispness of his delivery, the subtlety of his pedalling, the incisiveness of attack with never a hint of heaviness, and his range of keyboard colour are such that I’m sure the composer himself would have applauded. [...] All in all this is a splendid achievement’. – Calum MacDonald, International Record Review.