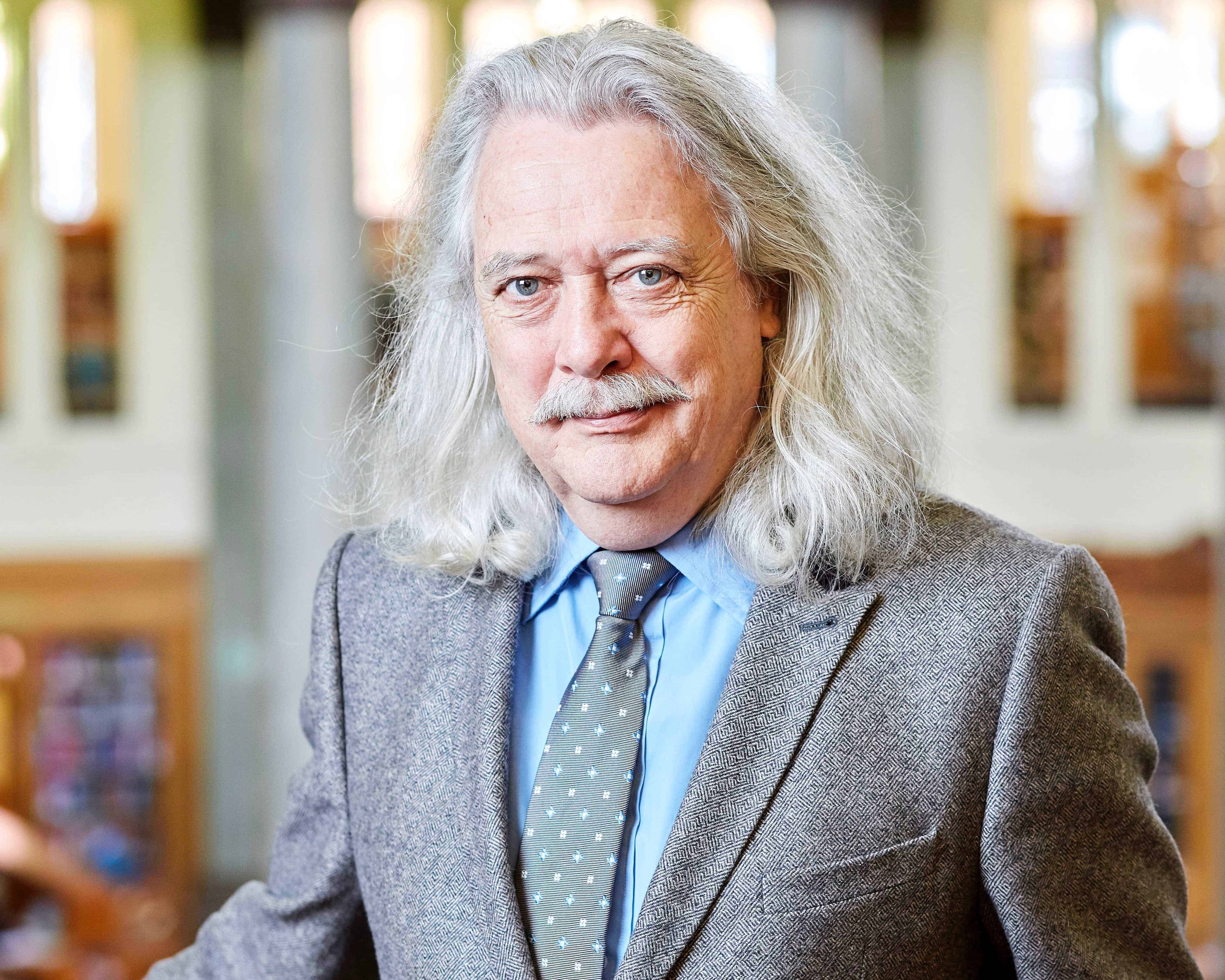 Mixing the Classical and the Popular

Posted by Derek B. Scott

The urge to compose music arose after I joined a rock group in my teenage years. Although I was later classically trained, I continued to be involved with popular music. For example, I sang professionally in a jazz opera in 1985, and later that decade recorded an album of Victorian and Edwardian ballads as singer and pianist. With this background, it’s no surprise to learn that, in my compositions, I wanted to mix techniques from both classical and popular genres. Let me attempt to explain how I went about doing so.

My early Pagan Overture (TOCC 0589, track 1) has what is commonly termed a ‘blue note’ as the sixth note of the seven-note motif with which it opens. Blue notes sound insistently on trumpets in the central climactic section (6:40–7:05). Sometimes I use blue notes in connecting passages, for example, between some of the voice phrases in ‘The Cap and Bells’ (TOCC 0619, track 19, 1:17–1:30), and just before the return of the main scherzo theme in my Second Symphony (TOCC 0646, track 7, 2:07–2:12). The last of my Thomas Hardy setting, ‘To Life’ (TOCC 0619, track 26), exhibits blues influences throughout, but the piece that leans heaviest on the blues, by adopting the twelve-bar format, is my orchestral Clear the Decks! (Boogie Woogie) (TOCC 0589, track 13).

Although I make much use of blue notes, syncopation and devices such as ‘call and response’ – you can hear an example of the latter in the opening of the finale of my Second Symphony (TOCC 0646, track 8) – it is not always the African-American dimension of the popular that characterises my shaping of musical material. Kirkliston Waltz (TOCC 0589, track 12) is a mixture of Viennese waltz and Scottish characteristics (especially the ‘Scotch snap’ rhythm). There is nothing new in that: some Scottish dance music was already taking on features of the Viennese waltz in the nineteenth century.

Traditional and folk-music has also had its effect. My short bagpipe concerto, Airs and Dances (TOCC 0589, track 2), contains a mixture of original tunes and arrangements of songs from the Isle of Skye that were collected by Francis Tolmie in the nineteenth century. It has been arranged in the familiar order of a Scottish ‘set’: slow air, retreat, Strathspey, reel and jig. The Victorian hymn lies not far behind the music of my short tone-poem, Brannigan’s Journey. It is heard first in minor form, but at the end, in Lisztian fashion, it blazes out in a triumphant major key. My fantasia Dafydd y Garreg Wen (‘David of the White Rock’; TOCC 0589, track 4) is based on a harp tune first published in Musical and Poetical Relicks of the Welsh Bards (1784). After being given words in the nineteenth century, it became one of the best-known of Welsh songs, despite its grim contemplation of death striking down an old harpist. The Scherzo of my Suite Grotesque (TOCC 0589, track 9) incorporates allusions to the gruesome ballad ‘Long Lankin’. The variations movement of this suite takes its departure from an extremely well-known air that is never stated in its original form. These are my ‘enigma variations’, although the enigma in this case is pretty easy to solve.

When it comes to classical techniques, the fugal devices in my Fugal Overture furnish obvious examples. The title ‘Fugal Overture’ may seem like a tribute to Gustav Holst, but I was actually more indebted to Dmitri Shostakovich. After a short introduction, a flute theme is heard that combines an unusual collection of notes, together with a simple chordal accompaniment (TOCC 0589, track 11, 0:41–1:00). There are many examples of this technique in Shostakovich’s output, from the main theme of his First Symphony onwards. Shostakovich aside, prominent among other twentieth-century composers who influenced me were Ralph Vaughan Williams, Kurt Weill and Jean Sibelius. I should add that my fondness for the combination of voice, string quartet and piano springs from my love of Vaughan Williams’ song cycle On Wenlock Edge. Often the music of Vaughan Williams and Weill resonates in my choice of harmonies. I’ve always admired the unexpected minor twists in Weill, notably his use of the minor chord with added sixth. You can hear this harmony at the end of the first phrase of the second subject of the first movement of my First Symphony (TOCC 0646, track 1, 1:05–1:10). Sibelius had an impact on my design of musical cells or motifs for development. The development section of my Pagan Overture has some Sibelian touches, as you can hear from 5:20–6:10 (TOCC 0589, track 1). That’s not to say that Sibelius always develops an idea; sometimes he can repeat it insistently, as in the second theme of the finale of his Second Symphony. An example of something similar from my own output is found in the accompaniment to the closing section of my setting of Robert Burns’ poem ‘Highland Mary’ (TOCC 0619, track 3,.3:57–4:38).

The popular music that influenced me most as a teenager was that of The Kinks and The Beatles, and the fondness for that music stayed with me. I enjoyed the satirical quirkiness of The Kinks, as well as the nostalgic flavour Ray Davies gave to certain songs. I was aiming to evoke a sense of nostalgia in my setting of Yeats’ ‘The Ballad of Father Gilligan’ (TOCC 0619, track 13). Satirical quirkiness features in my setting of Swift’s ‘A Satirical Elegy on the Death of a Late Famous General’ (track 2) and my music to Hardy’s ‘The Ruined Maid’ (track 25). In the case of The Beatles, I was very taken by the sometimes unexpected harmonies (for instance, the move from F to E minor at the start of the first verse of ‘Yesterday’), and the irregular phrases and changes of metre (there are striking examples in ‘Strawberry Fields Forever’ and ‘All You Need Is Love’). The occasionally unusual configuration of notes in a melody also took my fancy. Consider, for example, the opening of ‘In My Life’; I can’t think of another song that begins with the first four notes that John Lennon sings to the words, ‘There are places’. I’ve aimed to do comparable things: an example is the opening of my setting of Yeats’ poem ‘The Lake Isle of Innisfree’ (track 9). An example of the kind of clipped phrase heard when Lennon sings ‘love is all you need’ (at the end of the chorus in ‘All You Need Is Love’) can be found at the words ‘I chose to drift’ in the first of my Three Love Songs (track 14, 0:24–0:30).

I’ll conclude by remarking that my latest Toccata disc (TOCC 0646) contains two symphonies originally composed for the ‘popular’ medium of the British brass band (they have been recorded as such by the Black Dyke Band – World of Sound Recordings wos 155). I always wanted to make orchestral versions, but the pressure of my academic research in the cultural history of music never allowed me time to do so. That all changed after I retired and the COVID-19 pandemic forced everyone into lockdowns. The longevity of the pandemic (which is continuing in diminished form as I write) ensured that I was able to complete my orchestrations in time for a recording under Paul Mann’s baton in Latvia in March 2022. Paul has been a major supporter of my music, and he shows such exceptional musicality and insight that I sometimes think he understands my music better than I do!

Derek B. Scott was born in Edgbaston, Birmingham, in 1950 and came to music largely through the encouragement of his maternal grandmother, who was a pianist. Her grand-uncle, George Hope Johnstone, a friend of Edward Elgar, had been influential in the musical life of Birmingham as Chairman of the Midlands Institute and the Triennial Music Festival (one of his first commissions was Elgar’s The Dream of Gerontius.) Scott studied for a higher degree in composition at the University of Hull (1972–74) with Anthony Hedges, one of the leading British composers of light music. During his early career in the 1970s, he was the co-founder and musical director of a contemporary chamber orchestra (Kanon), which was based in Hull but also performed at nearby cities such as Lincoln and Scunthorpe. He was awarded three national prizes for his compositions in that decade. He has composed music for concert-hall and theatre, including an operetta, Wilberforce, staged in 1983 as part of Hull’s sesquicentenary commemoration of the passing of William Wilberforce’s Act for the Abolition of the Slave Trade (1807).

Having composed for performers ranging from the Northern Sinfonia to the Milton Keynes Chamber Orchestra in the 1970s, he began to experience doubts about the direction and purpose of his composing in the 1980s, especially since he had always been involved in popular music, as well as concert music. In the 1980s, he became absorbed in researching the cultural history of music and, in 1992, he was awarded a Ph.D. in the sociology and aesthetics of music. He was also the recipient, later, of an honorary doctorate from the Sibelius Academy, Finland. His books include From the Erotic to the Demonic (Oxford University Press, 2003), Sounds of the Metropolis (OUP, 2008), Musical Style and Social Meaning (Routledge, 2010) and German Operetta on Broadway and in the West End (Cambridge University Press, 2019).

His first appointment as a Professor of Music was at the University of Salford in 1996. It was at that University, which pioneered degrees in Band Musicianship in the UK, that he composed most of his music for brass band, which included two symphonies for brass and percussion (recorded by the Black Dyke Band in 2019 and recorded in their orchestral versions in 2022). His compositional output was usually driven solely by personal compulsion. For instance, as a player of the highland bagpipe, he felt an urge to write a short concerto for that instrument. In 2006, he was appointed Professor of Critical Musicology at the University of Leeds and found himself under considerable pressure to produce musicological publications for submission to research-assessment exercises, which have a big effect on the funding universities receive from the government. He was fortunate in being awarded a large grant in 2014 by the European Research Council for a project investigating the reception of English versions of German-language operettas in London and New York. He completed that research in 2019, and his official retirement came in September 2020.