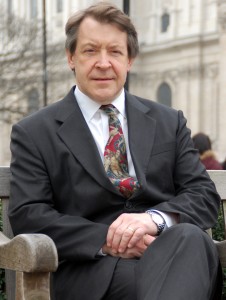 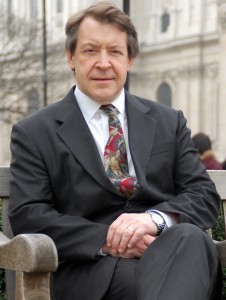 We’re delighted to announce that Vladimir Ashkenazy and Osmo Vänskä, treasured Patrons of Toccata Classics, have been joined by a third luminary, Sir Roger Gifford, who for the year ending in November 2013 was the 685th Lord Mayor of the City of London.* Roger is an old friend of mine since university days at St Andrews in the mid-1970s, where his father, Douglas, taught Spanish and founded and conducted the Renaissance Group; in the meantime he has risen to glory in banking (some people do, you know) and is active in a number of musical charities, not least as the chairman of the one which funds the English Chamber Orchestra (you’ll find more details of his career here). One of Roger’s last gestures as Lord Mayor was to assemble former members of the Ren Group from his time at St Andrews and on 2 November, under the direction of Neil Price, give a concert of sixteen-century polyphony in St Lawrence Jewry, in front of the Guildhall. The standard was surprisingly good — indeed, given that they had come together only at 10.30 that morning to begin rehearsing, astonishingly good. Perhaps Toccata Classics could persuade them to re-assemble once more to record some Antonio Brunelli or Antonio Cifra or some other such forgotten master — after all, it seems to be working for Monty Python….

*Just in case non-Brits are confused, having heard of some Boris Johnson fellow with a similar job-description: the City of London is the independently governed area of London to the east of St Paul’s Cathedral where the financial heart of the modern city now beats. You may have heard about a predecessor of Roger’s as Lord Mayor — a bloke by the name of Whittington, to whom legend ascribes a famous cat.

I run the CD label Toccata Classics and publish books on classical music as Toccata Press; I also write a bit about music in various publications in Britain and abroad. My degree (from the University of St Andrews, in 1977 – I’m a Scot) was in mediaeval French and German, and thereafter I worked in economics for twenty years, in London and Paris; I’ve been back in London since 1997. The main thrust of the postings in this blog will be in classical music, but since I am a secular liberal and free-marketeer with a healthy contempt for politics (economics is the study of the creation of wealth, and politics is the process by which it is wastefully dispersed) and a guarded resentment of religion, please don’t be surprised if I occasionally thump the tub on issues other than forgotten composers and other aspects of the musical world.
Categories : News
Tags : Patron, Sir Roger Gifford
Previous Post →
← Next Post