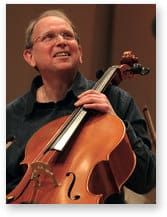 Alexander Ivashkin – Sasha to all who knew him – gone too early

Alexander Ivashkin – Sasha to all who knew him – gone too early

This morning news came through of the death, yesterday evening, 31 January, of Alexander Ivashkin, scholar, academic, conductor and, above all, wonderful cellist. Word got out some months ago that he was ill (he had pancreatic cancer) but – essentially a private man, for all his public profile – he kept the news to himself as much as he could. His death robs many of us of a friend and the world in general of a musician still at the height of his powers – he was 65 – and with much more to give.

Sasha’s life zigzagged across the globe, even before you count his concert tours. He was born in Blagoveshchensk, in the Russian Far East — to give you an idea of just how far east, it’s in the Amur oblast, on the Chinese-Russian border, above that bit of China which extends over North Korea; Blagoveshchensk is thus not only due north of Korea but well to the east of Mongolia. His musical abilities were obvious from the start: at five he began studies at the Gnesin Specialist Music School for gifted children in Moscow, showing such proficiency on both piano and cello that it took the intervention of Rostropovich to decide in favour of the latter. He was co-principal cello of the Bolshoi orchestra and director of the Bolshoi Soloists (a chamber ensemble) from 1978; in the late 1980s he taught cello and chamber music at Gnessins.

He was already prominent as a champion of contemporary music when he was appointed professor of cello and chamber music at the University of Canterbury in New Zealand in 1990; six years later the appearance of his Alfred Schnittke from Phaidon Press (still the only biography of the composer) established his reputation as the authority on Schnittke and his music. It was his appointment to a chair in performance studies at Goldsmiths College, University of London, in 1999 that for many of us transformed an international contact into a personal friendship.

Naturally, he took a lively interest in anything written on Schnittke. When the BBC Symphony Orchestra devoted a day to his music at the Barbican in January 2001, I wrote a feature on Schnittke in The Independent (in the days when The Independent was open to big arts features) and mentioned in the piece how Schnittke’s professional life had been bedevilled by Tikhon Khrennikov, the Party hack-man at the head of the Soviet classical-music machine since the late 1940s, and I added: ‘and he’s still there, the old spider’. I saw Sasha translating my article for Irina Schnittke, the composer’s widow, between concerts; afterwards he came running up me, grinning from ear to ear, and clapped me on the back: ‘Old spider – very good, very good!’

We collaborated on two releases for Toccata Classics, the first consisting of unknown pieces by (of course) Schnittke and entitled Discoveries, it was released in 2010. Then, two years later, Sasha proposed a CD featuring all three works for solo cello by Nikolai Korndorf, a composer friend of Sasha’s from his time in Moscow who had emigrated to Canada at more or less the same time as Sasha had headed for New Zealand. Sasha wanted the CD released to coincide with a symposium he had organised at the University of London, and we bust our arses here to get it ready in time. The CDs arrived from the factory in the nick thereof and we proudly grabbed a cab up to the symposium, set up stall at the back of the hall and I gave Sasha a first copy to wave at the audience – and he entirely forgot to mention it!

We had lots of recording projects under discussion: music by Lera Auerbach, Giya Kancheli, Valentin Silvestrov, the composers of the New Jewish School (Gnesin, the Krein brothers, etc.), and more. Now they’ll never happen. But just how much Sasha was involved with the music of his time is clear from the photo gallery on his website, where he can be seen with some of the most important composers of his day.

PS: My obituary of Sasha was finally published in The Independent (rather abruptly edited at the end) on 13 February: http://www.independent.co.uk/news/obituaries/alexander-ivashkin-cellist-and-musicologist-who-courted-danger-in-the-soviet-union-with-his-bent-for-contemporary-pieces-9127104.html.

I run the CD label Toccata Classics and publish books on classical music as Toccata Press; I also write a bit about music in various publications in Britain and abroad. My degree (from the University of St Andrews, in 1977 – I’m a Scot) was in mediaeval French and German, and thereafter I worked in economics for twenty years, in London and Paris; I’ve been back in London since 1997. The main thrust of the postings in this blog will be in classical music, but since I am a secular liberal and free-marketeer with a healthy contempt for politics (economics is the study of the creation of wealth, and politics is the process by which it is wastefully dispersed) and a guarded resentment of religion, please don’t be surprised if I occasionally thump the tub on issues other than forgotten composers and other aspects of the musical world.
Categories : News
Previous Post →
← Next Post