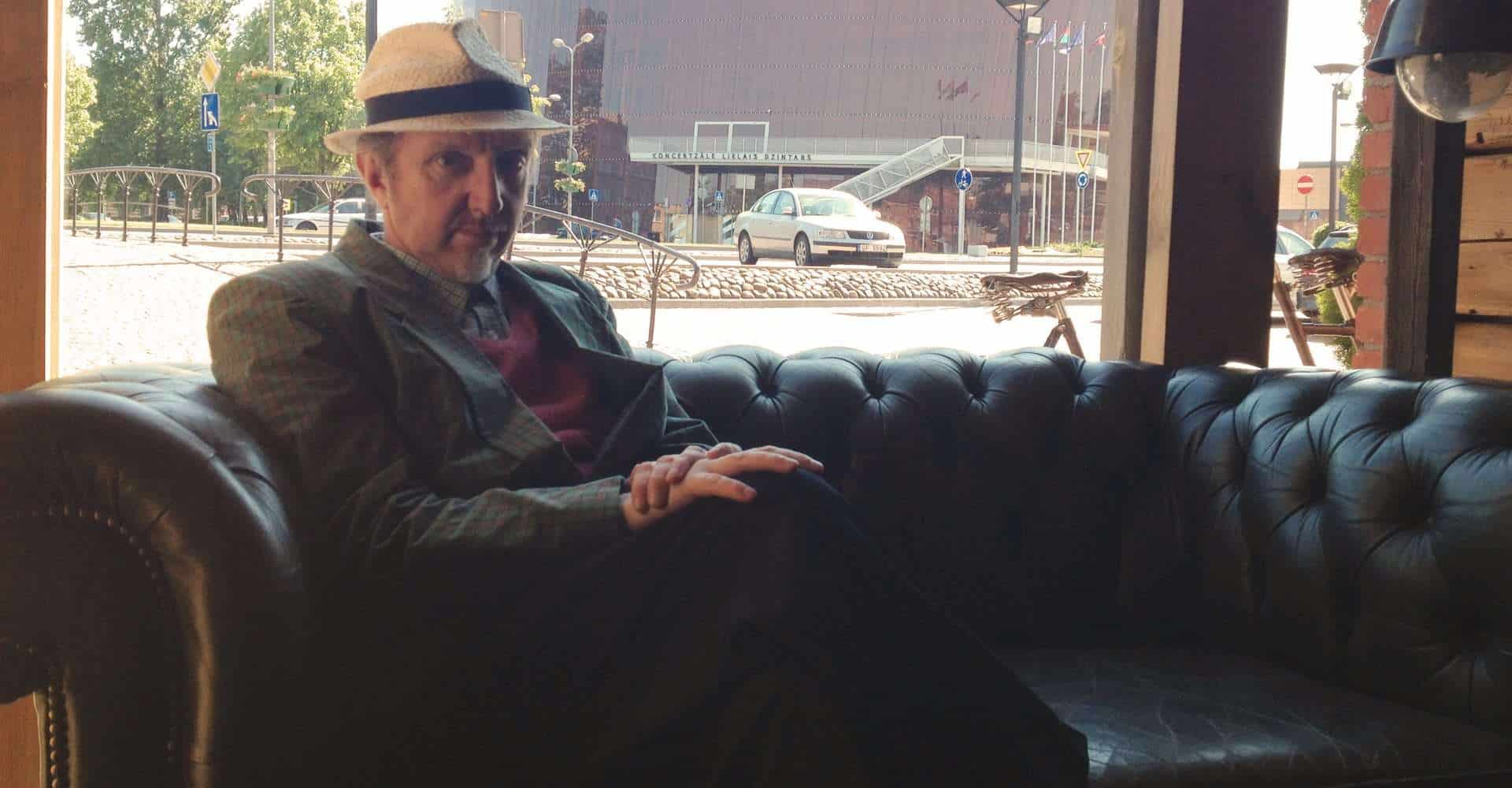 Recording my Tone Poems in Liepāja 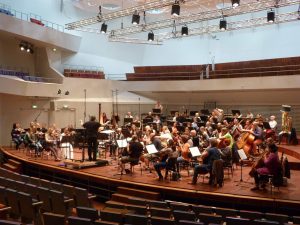 The first thing I noticed was the trees. Once we were out of Riga airport, they soon crowded up to the edge of the road; pools of green occasionally showed where you might expect to see a house but invariably there wasn’t a house at all. The car journey from Riga to Liepāja took about two and a half hours; it was forty minutes before I saw another person: a lady walking determinedly, slightly bent forward as if fighting a wind, although it was a still evening. The main road (the A9) was largely free of traffic, and there were no built-up areas along the way. The main impressions were of space, flatness and trees, most especially the shadows they cast. I was sharing the journey with my wife Xiaowei, the driver and Liena Dāvida, the Head of Project Department, Liepāja Symphony Orchestra, the purpose of the trip being to record some of my tone poems.

My first impressions of Liepāja were again of spaciousness: wide avenues with plenty of room for linden trees, cars and brightly coloured trams, large Jugendstil buildings and less ornate Soviet-era blocks, and open skies. In this green setting what more appropriate piece to record than a tone poem called Aspens? The work is subtitled ‘a forest nocturne after Edward Thomas’, and the music starting running in my head again during the car journey and with all the greenery we passed through, it seemed that a new setting had been found, although far from the poet’s wooded haunts of the South Downs or the hills around Dymock. 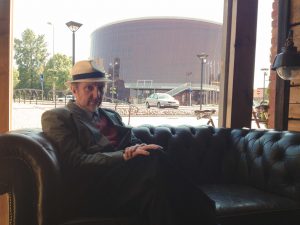 View towards the Great Amber Concert Hall from the Promenade Hotel

Once settled in the Promenade Hotel, we met Martin Anderson of Toccata Classics and the conductor Paul Mann. Liepāja is a port, one that benefits from remaining ice-free during the winter months. The hotel was a cleverly converted warehouse on the edge of the harbour which looked old enough to date back to Tsarist times. The original fabric of the building has been largely maintained; lots of brick walls and exposed timbers. The modern style of the interpolated décor has been soberly thought-out to achieve a satisfying blend. Most enjoyable was the fact that the reception area doubles as an art gallery. I was really taken with the paintings of Nikolajs Karagodins (1922–2015) and Jānis Lauva (1906–86), which seem to capture just the quality of light noticeable in Latvia. As one might expect from a seaside city, there was plenty of fish on the hotel menu and all of us at some point partook of ‘Liepāja Cod’, a creamy dish with potato and ham in addition to the fish. White wine was indicated. 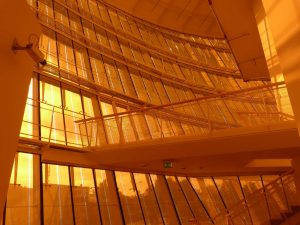 The Koncertzāle Lielais Dzintars (Great Amber Concert Hall) in Liepāja – literally just across the road from the hotel – is only two years old and is of a most striking design, which reflects the historic connection of the Baltic with the amber trade. Although the circular, tilted building is somewhat forbidding from a distance, as I got closer, I realised that its best effects come from reflections from the amber-tinted glass. It was hard not to be rather hypnotised by these glowing and ever-changing reflections. As we ventured further into the centre of Liepāja, it became noticeable how much of a landmark the Great Amber has already become; it was forever appearing between buildings. 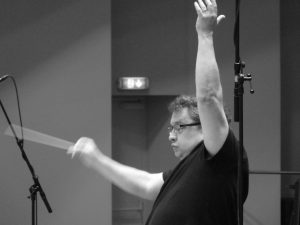 The music for the sessions consisted of Two Elegies for Strings and Harp (‘Locrian Ground’ and ‘Semper Dowland’), Ziggurats and Aspens. The earlier Toccata Classics recording of my orchestral music had taught me to trust Paul Mann’s unerring ability to get to the root of what the music is about. As with his undertaking of my massive Ninth Symphony (TOCC0393) Paul found just the right pacing for the structures to unfold. The orchestra played wonderfully and I hope they enjoyed the experience. Ziggurats and Aspens are both in a superficial sense nature or landscape pieces. The former might be heard as a meditation on Shelley’s Ozymandias although, like him, I can’t claim to have stood in the desert to witness ‘the lone and level sands’ stretching far away. Another standpoint might see the pieces as a study of desolated sonority. Into the mental stew of its composition went some of W. G. Sebald’s quiet but chilling disquisitions on time, not least that which concludes The Rings of Saturn, where souls of the dead must not catch ‘a last glimpse of the land being lost for ever’. We might well be losing land for ever at a quicker rate than that known by Ozymandias. 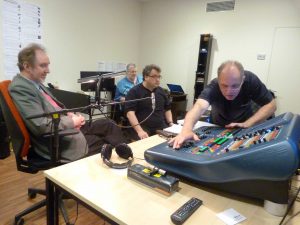 Listening to a playback with Martin, Paul and recording producer, Normunds Slava

The title of Edward Thomas’ Aspens might suggest that it is a simple nature poem, but it’s more than that: the poet seems to find kinship with the aspen ‘that ceaselessly, unreasonably grieves’. But inspiration from the poem was not the only stimulus of the music. One night I dreamt a scene with trees swaying in dusk as wind gathered and rattled fallen leaves. Glints of failing sun could be seen through branches; the whole scene being one of restlessness. There was music in the dream, too: D minor in mood but faulted, with melody and harmony bleeding into each other. As if to cap this Gesamtkunsttraum, a poem woven of these images and sounds was forming, one whose words I failed to capture on waking. As the music was being written, I began casting around for the poem, not mine perhaps, but one that I knew existed in the Collected Poems of Edward Thomas. He gave me the poem and the title; I’ve known Aspens for years, and perhaps it was Thomas’ poem in my dream; I can’t now know. During the recording Martin commented on a Sibelian quality, particularly during a bleak stormy episode, which reminded him of the central tumult in Tapiola. In retrospect, I think perhaps both Aspens and Ziggurats show some reflection of Sibelius, less to do with specific sounds but rather with the way that stillness and mobility act out in modes of musical expression; in Aspens banks of wind and brass float over the surface of melodies as if trying to halt their progress; in Ziggurats the E flat clarinet wails over a bed of shifting trombones, seeming to hint at both stasis and slow but inexorable erosion – all these effects were admirably caught by the excellent players of the Liepāja Symphony Orchestra. 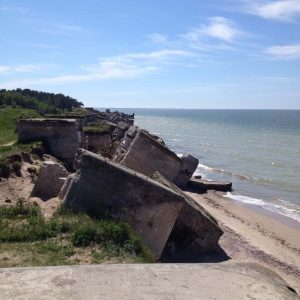 ‘Look on my works, ye mighty’: Russian North Forts falling into the sea

Between sessions there were further chances to explore the rest of the city. Liena took us on a tour of some of the sights: the North Forts (Tsarist-era gun emplacements – in many areas of the eroding coastline falling into the sea, and all inundated with fine white sand), the breakwater that runs out nearly two kilometres from the shore, the Orthodox cathedral in which we beheld many dazzling icons, and a quiet lakeside resort where we took lunch and Martin (an enthusiastic ornithologist, he told us, before his boyhood discovery of Brahms) named all the birds thereabout. 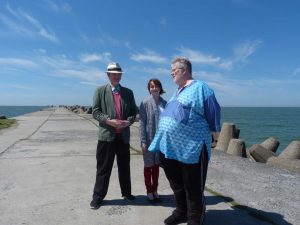 By the breakwater with Martin and Liena

I also took a trip with Xiaowei on our last day in Liepāja in a determined bid to get lost – the only true way to get to know a city. This excursion threw up some more surprises, not the least of which was another much smaller church where we were doused with holy water by the incumbent priest. Many old buildings revealed themselves thanks only to our deviations from main thoroughfares. In the main shopping street there is an Alley of Fame of Latvian Musicians, a series of stones with imprints of musicians’ hands and names. My ignorance of these artists demands remedy. We were both captivated by the ornate buildings, many of which are the work of Paul Max Bertchi. Finally, we rejoined Martin and Paul for a walk to the seaside, reached through a magical park, thickly planted with trees and shrubs. I marvelled at the light and shade created by the planting, rather different to the green expanses of many parks in London and providing a more secluded, intimate atmosphere. Liepāja is certainly a place to visit again, and we shall do so to complete the recording next year; a symphony is already forming for that purpose. 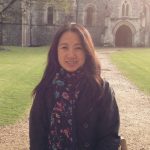 Xiaowei Liu was born in Shenyang, China, where she trained as a nurse. She came to the United Kingdom in 2006 and now works in a care home in Wandsworth, south London. She has a keen interest in photography and music.