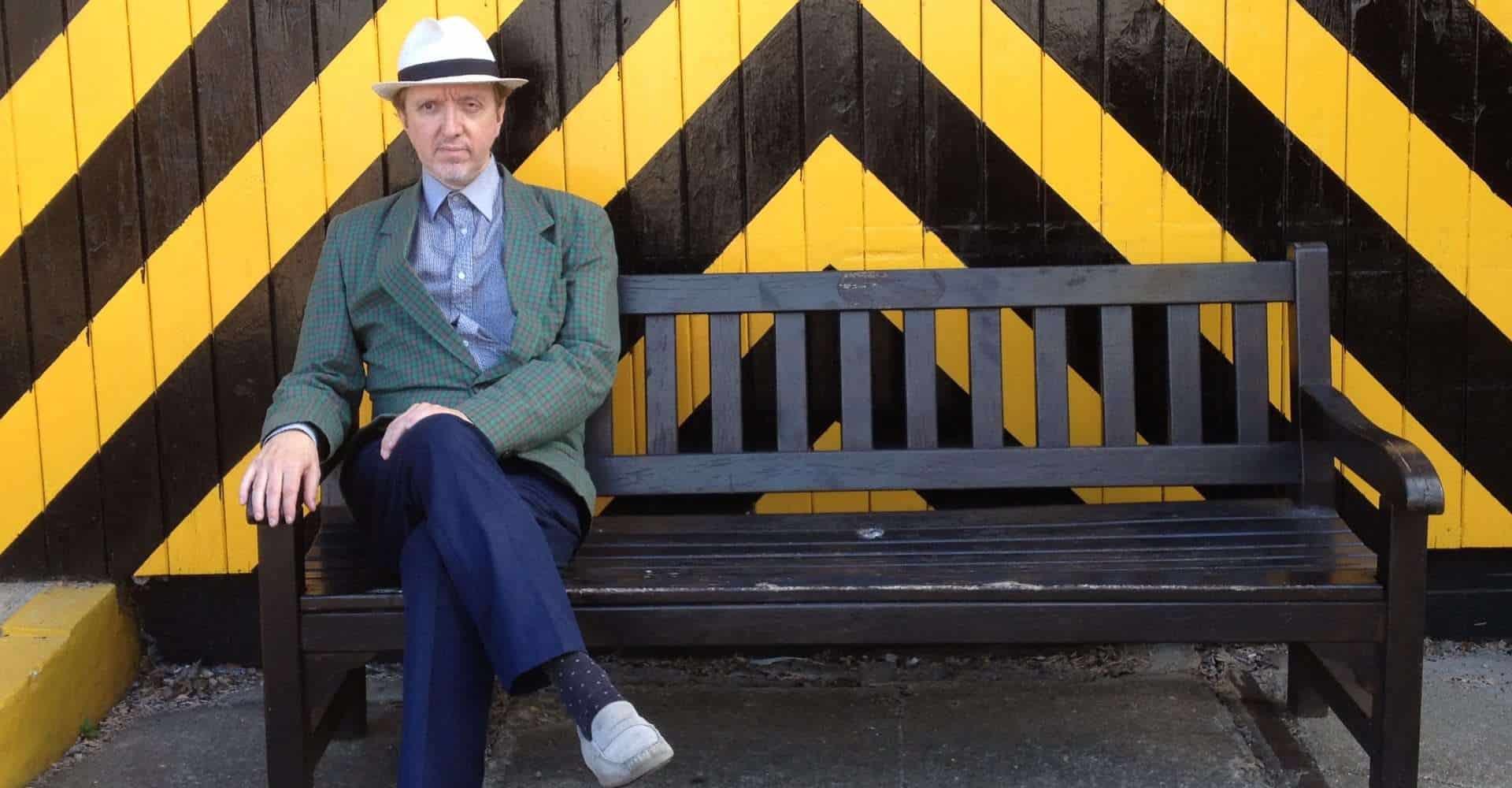 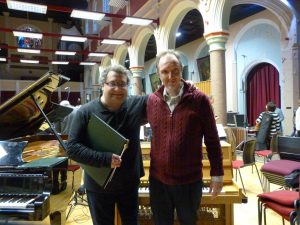 Paul Mann (left) and David Hackbridge Johnson after the sessions

I’m just back from a thrilling two days in Liverpool conducting the first-ever recording of the music of David Hackbridge Johnson. Indeed, these were not merely the first recordings, but pretty much the first performances of any of his music anywhere. Already in his early fifties, David has amassed a catalogue of well over 350 opus numbers and yet he has never heard any of them performed. So, while it is true to say that most composers would be only too grateful to hear their own music for the first time in the hands of a world-class orchestra such as the Royal Liverpool Philharmonic, very few would have been prepared to wait so long.

‘A work of art is good if it has sprung from necessity’, wrote Rainer Maria Rilke in his Letters to a Young Poet (still one of the best books of advice for musicians as well as writers), and the sheer force of artistic compulsion driving David’s music was self-evident even from a first reading of the score of his Symphony No. 9 in C sharp minor, Op. 295. An epic statement cast in three equal parts lasting almost fifty minutes, it is scored for a large orchestra, including two keyboard players, and making especially virtuosic demands upon a large brass section. Unusually from a structural point of view, the work includes not one but two passacaglias of immense eloquence and cumulative power – a risk which pays magnificent and unexpected dividends. The invention never flags, gripping the interest whether in the sustained vaulting energy of the opening movement, or the richness and beauty of the central set of variations.

Joining the Symphony on the disc are two shorter works, the brief and contemplative Communion Antiphon No. 14, Op. 359, and the rhetorical Motet No. 2, Op. 257, No. 2, a piece which suggested to me a kinship of concept, if not of musical language, with Samuel Barber’s orchestral Essays. Although scored for a smaller orchestra than the Symphony, the Motet is an overwhelmingly powerful work, with a harrowing ending that brings the music of Janáček to mind. 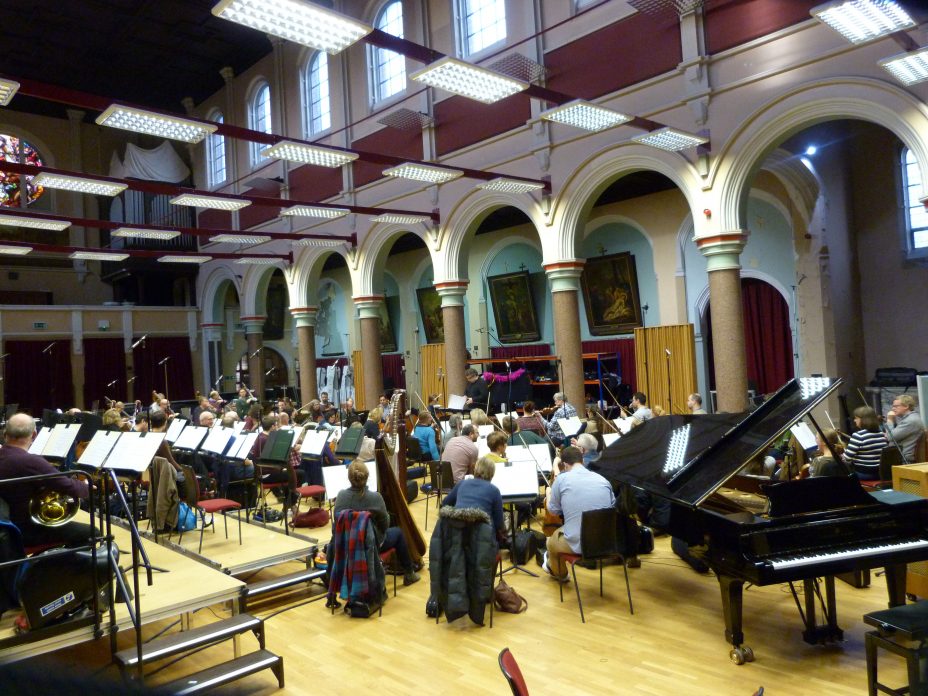 The RLPO could have been forgiven for approaching such a project with a degree of scepticism (a ninth symphony from a completely unknown composer…?), but they embraced it with tremendous involvement and engagement – a testimony to their artistry as well as to the most remarkable thing of all about David Hackbridge Johnson: that a composer with no experience of hearing his own work except in his own imagination could write for the orchestra with such resourceful sureness of touch, entirely without even a moment of awkwardness or impracticality.

It’s difficult to place the influences: David cites both Rubbra and Bax as possible presences behind the music, but only ones to be identified in passing, and after the fact. Beyond that, I’d be hard-pushed to mention anyone it reminds me of. It is full of energy – I’d say around two-thirds of its total duration is fast music, full of rhythmic and metrical variety, itself an increasingly rare commodity when so much contemporary music seems concerned with creating an atmosphere rather than pursuing an argument. David’s symphony is genuinely symphonic, with everything derived from the smallest of motifs and, in its closing moments, achieving a sense of genuine uplift.

Which all goes to prove that, contrary to the much-vaunted ‘death of the symphony’, it is still possible to write one worthy of the name, using all the standard structures (sonata, variation and passacaglia) and yet making them feel relevant, alive and new, in an immediately appealing and recognisable musical language.

He is clearly a major figure, and if I can play a part in bringing his music some of the attention and appreciation it deserves, I will be very pleased and proud. The opus numbers of all three works point to an astonishingly large output, which I am only beginning to explore further. The album is called ‘Orchestral Music, Volume One’ with good reason: I am glad to report that we are already discussing the contents of Volume Two.

Paul Mann is a regular guest-conductor with many orchestras throughout Europe, the USA, Australia, and the Far East. Those with which he has worked include the BBC Orchestras, the Orquesta Ciudad de Barcelona, Bergen Philharmonic, Orquesta Sinfónica de Bilbao, Orchestre de Bretagne Britten Sinfonia, City of Birmingham Symphony, Copenhagen Philharmonic, Flemish Radio, Orquesta Ciudad de Granada, Hallé, Lahti Symphony, Luxembourg Philharmonic, Netherlands Radio Philharmonic, St Petersburg Philharmonic, Royal Scottish National, Real Orquesta Sinfónica de Sevilla, RAI Torino and Orchestra dell’Arena di Verona, among many others. His debut with the Queensland Orchestra in 2003 resulted in regular re-invitations to Australia, with the Adelaide Symphony, Melbourne Symphony, Tasmanian Symphony and West Australian Symphony Orchestras, as well as the Auckland Philharmonia in New Zealand, and the Malaysian Philharmonic. His work as chief conductor of the Odense Symphony Orchestra in Denmark achieved considerable critical success, particularly in the symphonies of Beethoven, Elgar, Mahler, Schumann and Shostakovich, and with whom he also made numerous recordings of a wide range of repertoire, for such labels as Bridge, DaCapo and EMI. He first came to international attention as first prizewinner in the 1998 Donatella Flick Conducting Competition, as a result of which he was also appointed assistant conductor of the London Symphony Orchestra. He made his LSO debut shortly afterwards, and subsequently collaborated regularly with the Orchestra both in the concert hall and recording studio. Special projects with the LSO included the Duke Ellington Centenary Concert at the Barbican Hall with Wynton Marsalis, and a famous collaboration with the legendary rock group Deep Purple in two widely acclaimed performances of Jon Lord’s Concerto for Group and Orchestra at the Royal Albert Hall, the live DVD and CD of which remain international bestsellers. Among his most recent recordings is the first-ever studio recording of Lord’s Concerto, with the Royal Liverpool Philharmonic Orchestra, in collaboration with Jon Lord himself and a star-studded cast of soloists, and the live recording of Celebrating Jon Lord, a special concert which took place at the Royal Albert Hall in April 2014 with an all-star cast paying tribute to the late composer.
Categories : Guest Blog
Tags : David Hackbridge Johnson, Guest Blog, Orchestral Music, Paul Mann
Previous Post →
← Next Post