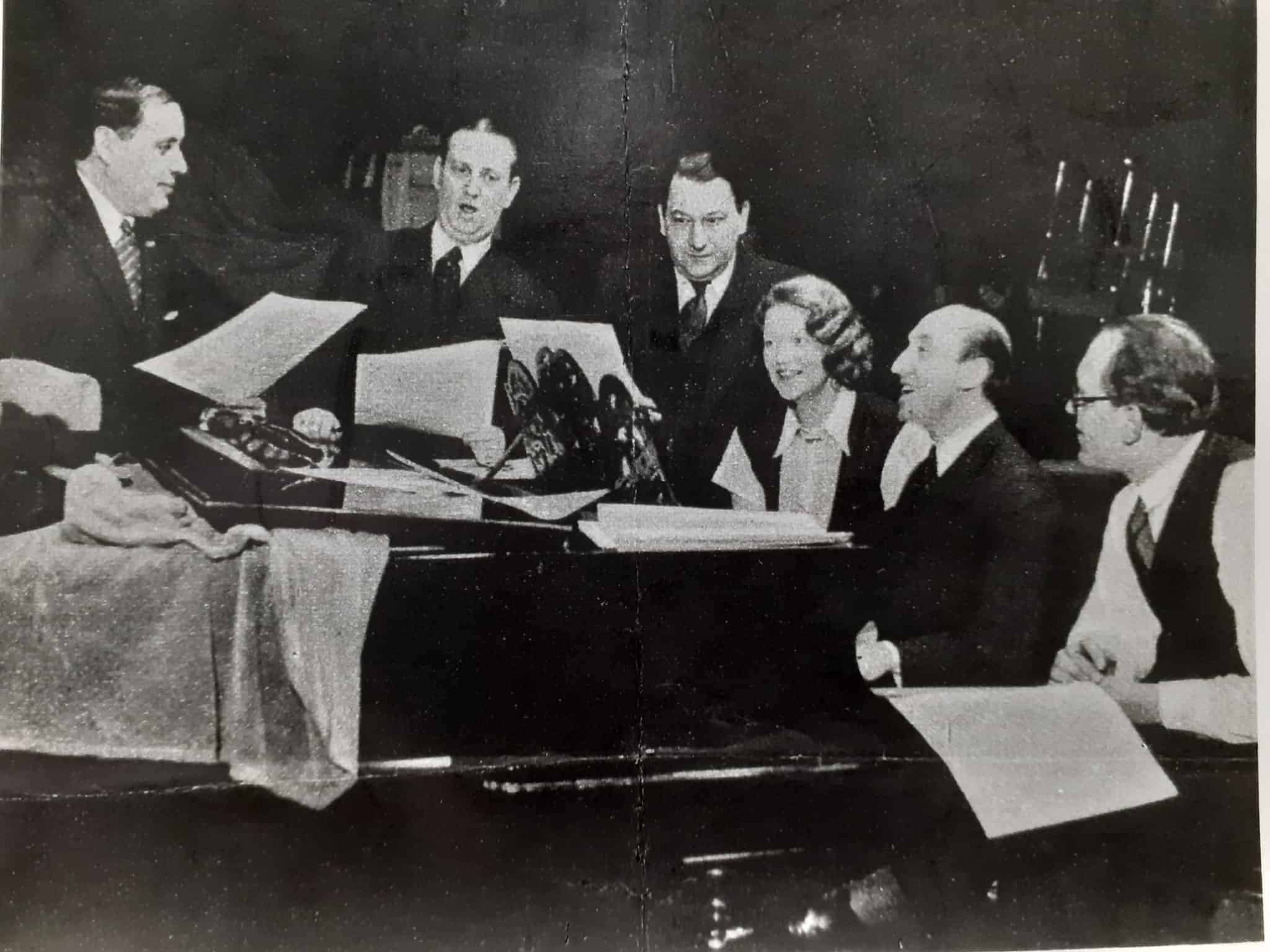 Spoliansky rehearsing Es liegt in der Luft in Berlin in 1932

A Symphony by Mischa Spoliansky

It may come as a surprise to many that Mischa Spoliansky, the composer of the sly and witty cabaret songs that helped to launch the career of Marlene Dietrich and the sparkling scores for the British film industry, should have left a five-movement symphony that lay unperformed for decades after his death in 1985.

In his unpublished autobiography – a fascinating document that deserves to be widely known – Spoliansky described the evolution of this work:

When I was younger and working from one composition to the next, I decided that when the time came to work less I would start composing a symphony. In the interim whenever I had some spare time, I would make notes of my ideas, musical themes, phrases, anything that came into my head. I carried on over several years until I stopped working so much. By this time I had collected a considerable amount of material. And what was so extraordinary was that these brief sketches and outlines fitted together and had taken on some sort of form. I was then able to write out my symphony, which has five movements.

He added plaintively: ‘Perhaps one day it will be performed’.

To each of the five movements Spoliansky attached a title, suggesting an autobiographical programme:

Like Darius Milhaud, another composer of Jewish origin (though Sephardi rather than Ashkenazi) who was a close contemporary, Spoliansky was a self-declared optimist. Milhaud entitled his autobiography My Happy Life, and Spoliansky ended his with the words ‘I have been a very lucky man’.

Spoliansky did indeed have plenty of blessings to count: a warm and loving early childhood that clearly formed his character, a God-given talent and the lucky breaks that led to a brilliant career in the cultural hothouse of 1920s Berlin. It was a quite extraordinary piece of luck that in 1933, of all years, he enjoyed a huge international hit with the song he described as his passport to freedom, ‘Tell Me Tonight’. Above all, he enjoyed a supremely happy private life, with an enduring marriage and loving daughters, in a milieu that in earlier years, at least, can hardly have been conducive to stable domesticity. And finally, though he cannot have known this when he wrote his autobiography, he died peacefully in his own bed, according to a postlude written by his daughter Spoli.

Of course, there were darker aspects to Spoliansky’s life that do not go unacknowledged in his autobiography, even if he chose not to dwell on them.

Quite apart from the persecution and disruption that was the common experience of Jewish artists in the first half of the twentieth century, Spoliansky endured more than his fair share of the hammer blows of fate. In particular, the premature deaths of his mother, when he was seven years old, and of his father, when he was twelve, led to a period of Dickensian grimness.

To what extent was Spoliansky’s Jewish background a factor in his creative personality? He tells us that he consciously renounced religion at an early age. But even had he wished to do so, the political events of his lifetime – pogroms in his early childhood and Nazi persecution later on – never allowed him to forget his Jewish origins, and he mentions them frequently in his autobiography. The pattern of his career follows a pattern typical of Jewish composers, from Offenbach to Gershwin, in operating along the blurred boundaries between classical and popular music.

Mischa Spoliansky was born in 1898 in the Polish city of Białystok, then part of the Russian Empire. He was the youngest of three siblings, a fact that may have some bearing on his essentially happy and easygoing character. His father was a moderately successful operatic baritone who had earlier sung at the Mariinsky Theatre, and there was music in the household from the first. His older brother, Schura, played the cello and his sister, Lisa, the piano, eventually studying in Vienna with the legendary Pȁdagog Theodor Leschetizky. An idyllic early childhood surrounded by love and protected from the menace of anti-Semitism seems to have given Mischa the emotional resilience to survive the tragedy of the premature deaths of both parents.

Love played an exceptionally important role for Spoliansky – not the tormented and tempestuous love of a Liszt or a Berlioz but a quietly contented love that lasted a lifetime, immune to the surrounding storms of his era. He did not see a conflict between domestic and creative life and, according to his eldest daughter, Spoli, was happy to continue composing with his children playing on the floor in the same room. Spoliansky’s account of his courtship of his wife Eddy reads like the script of a Hollywood movie: love at first sight, followed by a delightful period spent in a country house as guests of a wealthy and eccentric friend.

Spoliansky was one of those composers, like Rossini and Offenbach, with an instinctive ability to express laughter through music. Indeed, he was at one point dubbed ‘The Berlin Offenbach’. It is no coincidence that the first piece of music that he composed at the age of six was entitled ‘Scherzo’. He was a very witty man and always ready to find the humour in every situation. This comes through in his delightful autobiography, as well as in his cabaret songs and film scores. His song ‘Mir ist so nach dir’ or ‘Viens!’ is funny in both the French and German versions – with very different texts – and the jaunty tune would raise a smile even with no text at all.

In spite of his early experience of family tragedy, Spoliansky was blessed in that none of his immediate family was involved in the Holocaust. He did not have the experience of the sculptor Oscar Nemon, who found precarious refuge in Britain only to discover at the end of the war that his entire family had been murdered. Spoliansky’s parents were already dead and his two siblings also escaped, though he must have feared for them until he heard news of them at the end of the war.

Twenty years ago, when Spoliansky’s oldest daughter Spoli was hoping to publish her father’s autobiography, she began to read through her mother’s diaries in search of material to amplify her father’s text. In one of our joyous weekly conversations (always enhanced by the generous glasses of vodka and tonic that Spoli poured out for me), I commented that her parents must have been dreadfully fearful in the autumn of 1940 when German victory and the arrival of the Nazis in Britain seemed possible and even probable. Spoli exclaimed: ‘Oh no! It never occurred to us that the Germans would win’. In fact, Spoliansky’s autobiography contains many comments about the fears he and his wife had for their daughters, and the very next time Spoli and I met she told me how shocked she was to discover an entry in her mother’s diary recording a conversation she and Spoliansky had about what to do to protect their daughters in the event of a Nazi victory, including the ultimate option of shooting them to prevent them falling into Nazi hands. Spoliansky’s autobiography also makes a number of sad references to friends and colleagues from the Berlin years who did not make it to the end of the war.

As the 1930s began, Mischa Spoliansky was on a heady roll of success. The possibilities seemed infinite, and his career could have developed in a number of directions. He had made his name in the late 1920s with a series of brilliantly successful musical revues, including Es liegt in der Luft (providing Marlene Dietrich with her first major success), Zwei Krawatten and Alles Schwindel. He had the prestige of working with Germany’s leading theatre director, the all-powerful Max Reinhardt. He had written a full-length opera that awaited production (it was entitled Himmelmayer – another never-performed work that might deserve disinterment). The international success of Spoliansky’s songs for the 1933 film Tell Me Tonight opened the possibility of an entirely new career in the movies. From an artistic point, the most interesting development was Spoliansky’s ‘cabaret opera’ Rufen Sie Herren Plim!, premiered in Berlin at the end of 1932. Live recordings of excerpts from a performance provide evidence of the warm reception the Berlin audience gave to this novel form of entertainment on the eve of the Nazi takeover. But political events prevented any follow-up.

In his application to the German government after the Second World War for compensation for lost earnings (an insultingly meagre compensation, as it turned out), Spoliansky wrote:

The changes brought about by the National Socialists did not simply mean the annihilation of my economic existence, but it meant that work I had spent years creating and developing for the future, so closely bound to the German language and German culture, never saw the light of day and was lost forever.

In the following years, the diaspora of Berlin musical talent reacted variously to the new circumstances around the globe. Spoliansky’s old friends Werner Richard Heymann and Friedrich Hollaender found a measure of success in Hollywood, while Erich Korngold and Franz Waxman took the art of the film score to new heights. For many, such as Spoliansky’s former mentor Max Reinhardt, times were hard and cultural life unrewarding. Ralph Benatzky, disheartened by his lack of success in the New World, contemplated suicide by throwing himself from a building. While strolling down Broadway, Alexander Zemlinsky told his wife bitterly that he should not wish to be buried there. Paul Abraham was committed to an asylum after trying to conduct New York traffic, and Jaromír Weinberger eventually took his own life.

After the Second World War, all the surviving refugee composers were then faced with the grim reality that musical tastes had moved on and they had been left behind. Spoliansky suffered his own disappointments. It must have been a bitter pill to swallow when the Hungarian film producer Alexander Korda transferred the production of the lavish film The Thief of Bagdad from England to Hollywood and replaced Spoliansky with Miklós Rózsa, providing the latter with a career break that could have been Spoliansky’s. Nevertheless, Korda had already introduced Spoliansky to the admittedly rather less glamorous British film industry, and to that industry Spoliansky was able to devote much of the rest of his career, creating a notable body of work.

Though we may regret the exciting and experimental works that Spoliansky might have created had he been allowed to remain in Berlin, we can at least congratulate ourselves that this rediscovered symphony may provide some compensation for lost opportunities.

Patrick Bade is an historian, writer and broadcaster. He studied at University College London and the Courtauld Institute and was senior lecturer at Christie’s Education for many years. He has worked for the Art Fund, Royal Opera House, National Gallery and the Victoria and Albert Museum. He has published on nineteenth- and early-twentieth-century painting and on historical vocal recordings. His books include studies of Degas, Klimt and Mucha; the latest is Music Wars: 1937–1945. He leads cultural tours to various European cities, including Vienna, and is the author of several books on nineteenth- and twentieth-century painting and music, including Femme Fatale: Images of Evil and Fascinating Women, and Music Wars, as well as monographs in the ‘Reveries’ series on Degas, Henri de Toulouse-Lautrec, Renoir and others. Reviewing Music Wars, Sir David Hare noted that he has ‘A dazzling gift for both hilarious and devastating detail’.
Categories : Guest Editorial
Tags : Mischa Spoliansky, Patrick Bade
Previous Post →
← Next Post