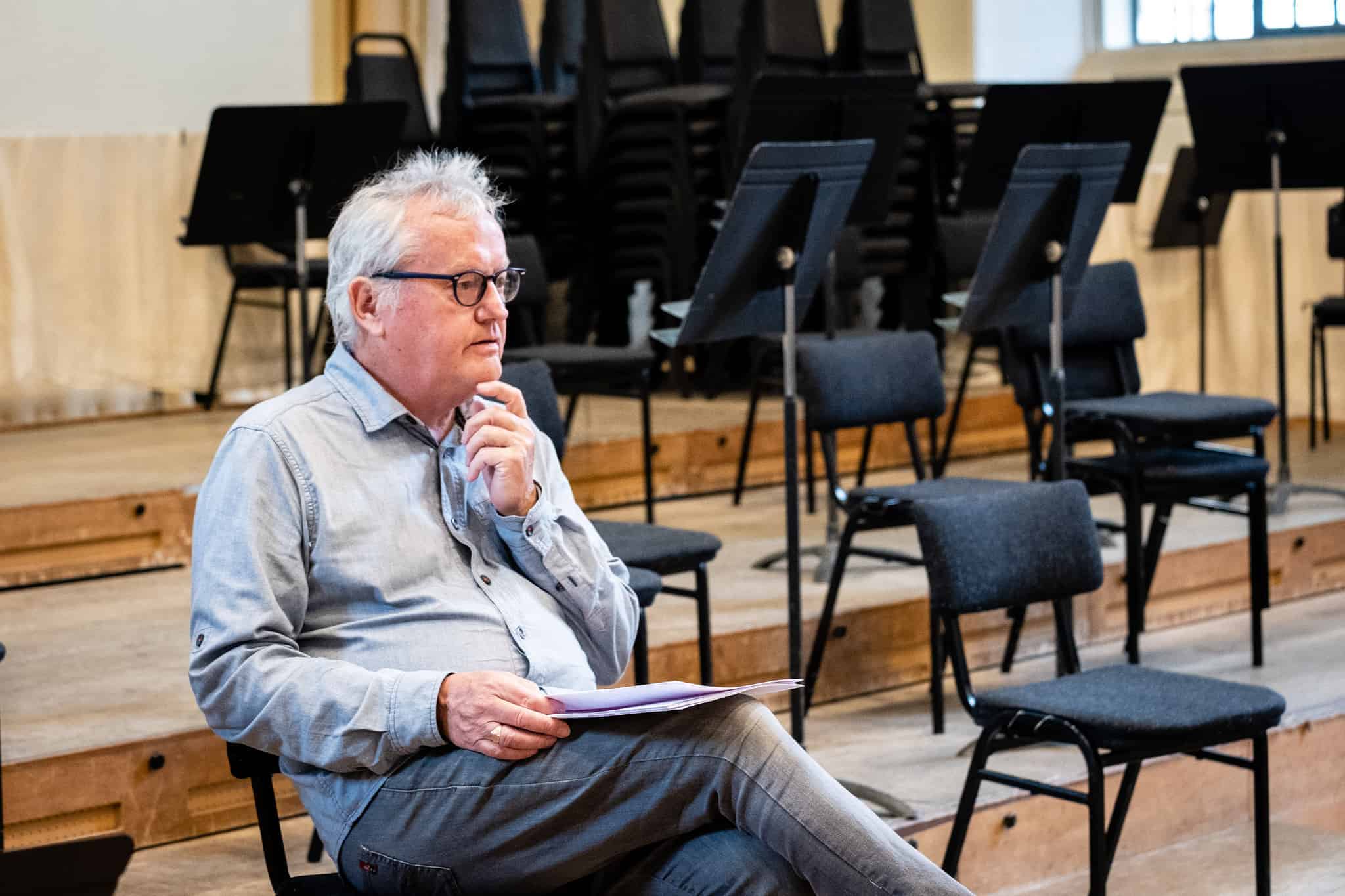 Recording “An Outstretched Hand” and Other Chamber Works 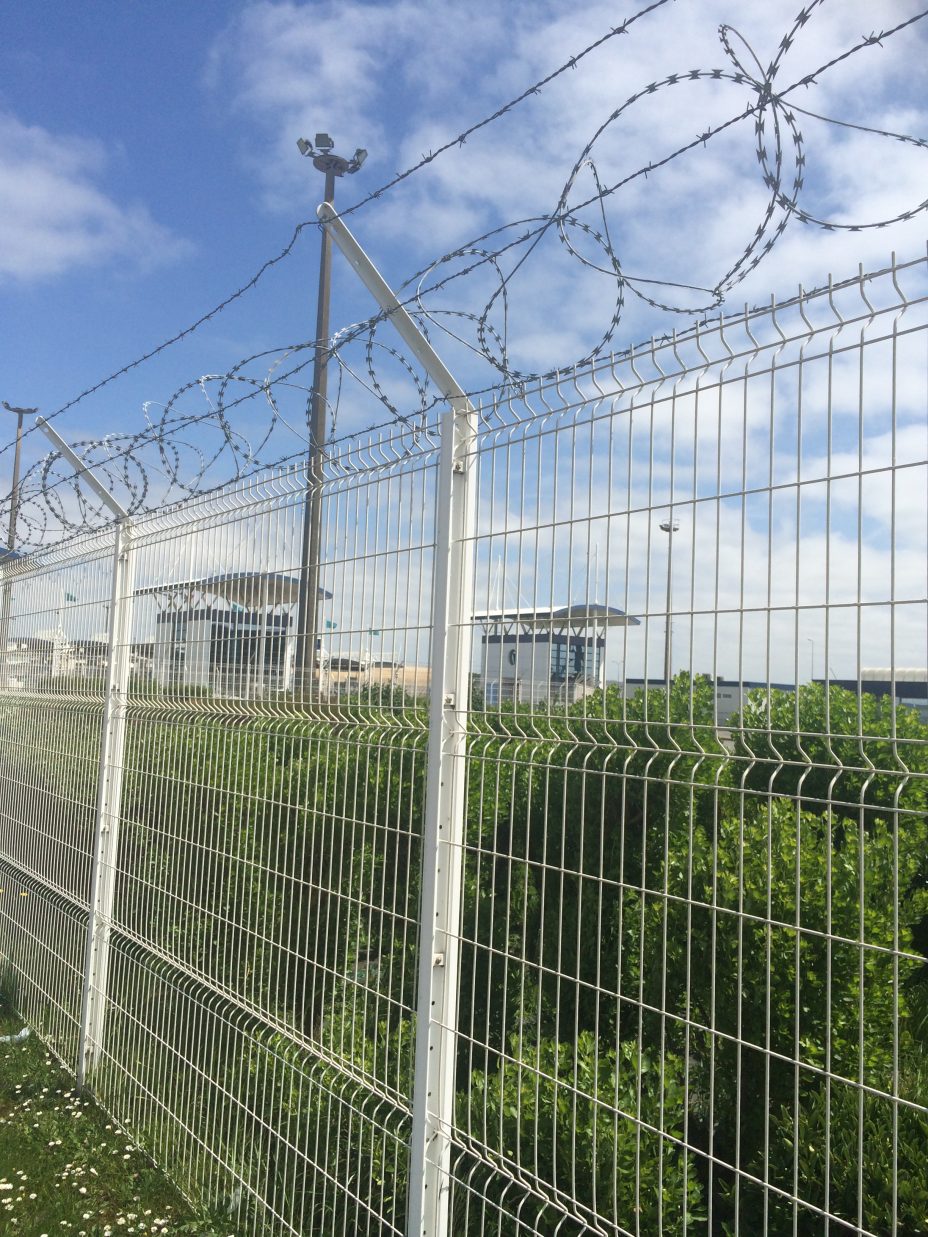 At half past four on a Friday morning in May 2018 I set out from my home in south-eastern France to go to England. The French rail strike had made travel by train a haphazard undertaking, and as I prefer to avoid flying, I had decided to drive. The 700 kilometres between where I live and Calais were easily dispatched by eleven o’clock and so I found myself with five hours to wait for my ferry. Readers who have made the trip will know that the approach route to the port is lined by mile after mile of fencing topped with barbed wire. I caught glimpses of what I took to be displaced people on the other side of the fence, being kept in or kept out, depending on your point of view. The whole prospect was distressing in the extreme, and as I diverted to the town centre in search of some occupation to kill the time (other than eating rather more than was good for me, I found none), I began cursing the insomnia which had led me to make such a pointlessly early start. And then it suddenly struck me how grimly appropriate it was that I should be held here, a virtual prisoner in this last town in France before I crossed the channel. I was heading for London, for the recording of An Outstretched Hand.

When, in the spring of 2015, the music-writer and translator of the Prokofiev diaries Anthony Phillips suggested that I might write a piece for an ensemble of flute, clarinet, violin, cello and piano, I was not aware of the magnitude of the growing refugee crisis, nor was it in my mind as I began work. Casting about for an idea to kickstart the piece, a phrase of Gerald Finzi’s came to mind: he once compared composing to shaking hands ‘with a good friend over the centuries’. This image of a hand outstretched in greeting was soon followed in my mind by another: that of a hand pleading for help and a second hand offering it. The tensions between these two interpretations – cry for help and solace proffered – were sufficient to get me started on this twenty-minute piece. And as I worked, the refugee crisis came more and more into the forefront of the news, until by the time I had finished, I realised that, without intending to do so, I had created a piece of terrifying topicality. 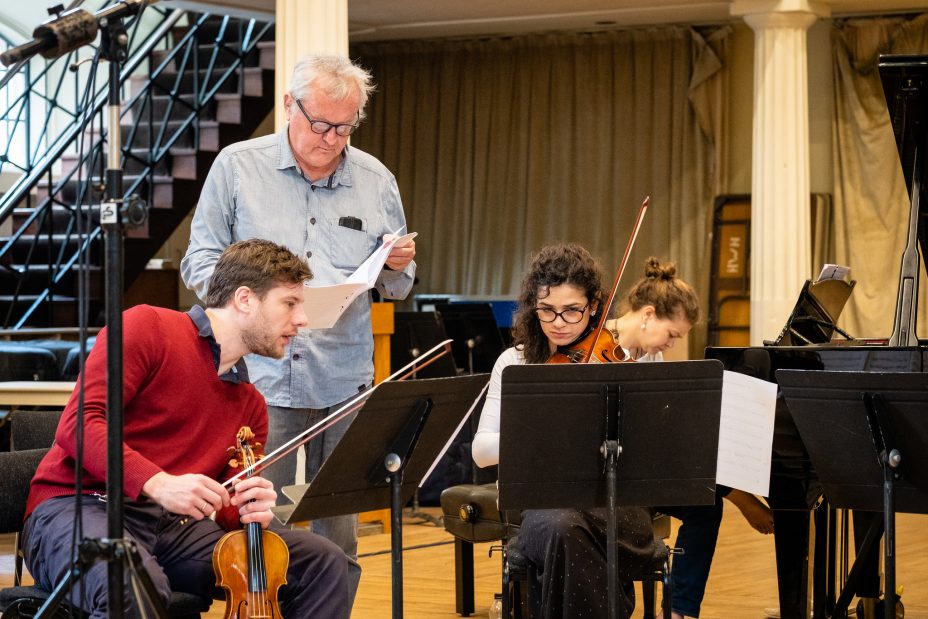 Sadly, the ensemble for which the piece was written had to cease its activity for want of funding, and so An Outstretched Hand has yet to have a public premiere. But with the specifications I had been given for that ensemble now no longer binding, I felt able to add a viola to the mix, and it is in this sextet line-up that the piece was recorded by the Veles Ensemble and guest musicians in Henry Wood Hall in the last week of May.

Before that, we had spent two days in St Silas’ Church in Chalk Farm recording my Clarinet Sextet, The Shed Dances and the String Trio No. 1. Michael Ponder, our recording producer, chose the venue for its wonderful acoustic, and it did not disappoint. The recording had to be interrupted for an hour on both days for a short service in the church: it was scheduled for 11.45, and at 11.44 on both days the vicar appeared as if by magic in the room we had set up as the recording studio and glided silently into the church.

The Clarinet Sextet began life as a concertino for clarinet and strings, and it was in this form that it received its first amateur performance in France, with the clarinettist Philippe Mercier, for whom I had written it. In this recording, the solo part – for it still retains concertante elements even in this sextet version – was sensitively performed by Peter Cigleris, brilliantly supported by The Veles Ensemble (Harmut Richter, violin; Ralitsa Naydenova, viola; Evva Mizerska, cello) with Yuri Kalnits, violin, and Leon Bosch, double bass. The work is in three movements, the last being a set of variations on the folk dance ‘The Mason’s Apron’, in which the first violin is asked to assume a folk style of playing. Hartmut’s rendering of this surpassed my expectations, bringing a touch of hilarity to the piece, before the opening music returns and leads the music to a wistful fade-out.

The Shed Dances were written at the suggestion of Ruth Chalkley, a patient with ataxia, a rare neurological condition which causes a lack of coordination, balance and sense of position. Ruth has an acquired form caused by ingesting gluten; this particular form was named about twenty years ago by Professor Marios Hadjivassiliou. The dances were composed in 2016 for a project to raise awareness of the work of Heinrich Frenkel (1860–1931), a now forgotten neurologist, who dedicated his life to developing exercise rehabilitation for the form of ataxia he recognised. The original version of The Shed Dances was for violin and piano. Peter Cigleris again joins the Veles Ensemble in the clarinet-quartet version of this set of six dances with intriguing titles, such as ‘Disgruntled Waltz’, ‘Boneyard Antics’ and ‘Leaden Clog-Dance’. 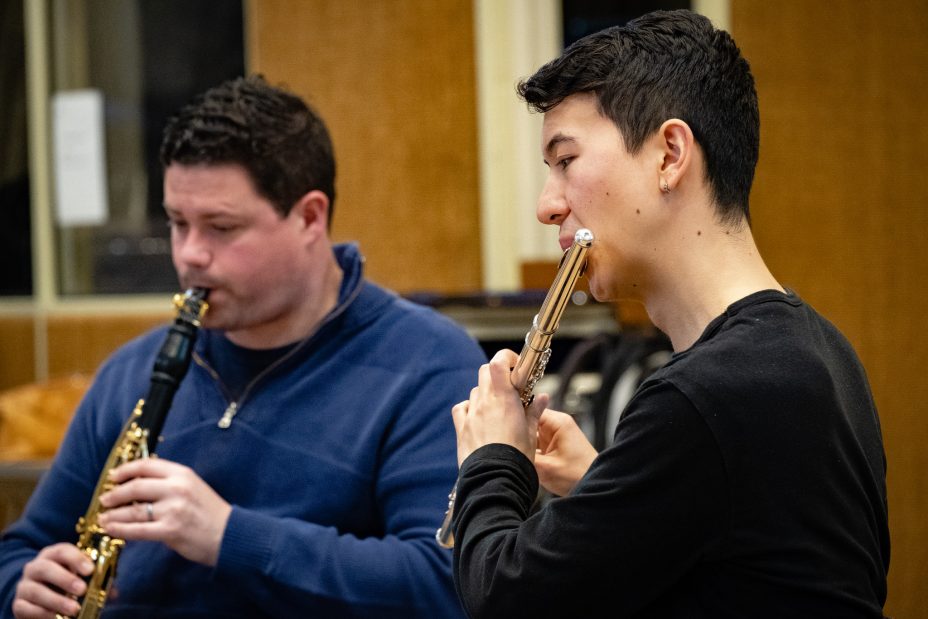 My String Trio No. 1 was originally written for a friend who played in an amateur string quartet. Unfortunately, the cellist left the group, and so my friend asked me for a piece for two violins and viola, which I duly produced. When Evva Mizerska, cellist of The Veles Ensemble, asked me if I had anything for string trio, I remembered this piece and recast it for the more conventional line-up of violin, viola and cello, in which it was first performed by the Veles Ensemble in March 2017. The piece proceeds by fits and starts, alternating wild dance music with fragile, almost inaudible chorale-like passages. This kind of music is very difficult to record: the slightest sound hanging over, such as that produced by a finger lifting away from a string, ruins the effect completely. Fortunately, thanks to the ever-vigilant Michael Ponder and the tenacity of the musicians themselves, we were able get the piece safely in the can.

And so to Henry Wood Hall and the final, and most challenging, recording of them all. For An Outstretched Hand, The Veles Ensemble was joined by the flautist Dan Shao, pianist Catalina Ardelean and, again, the clarinettist Peter Cigleris. The ambiguity of its extra-musical imagery finds musical expression in the oscillating semitones which begin the piece and which inform several of its themes. The work ends with an anguished cry of despair, after which it fades out on the semitonal oscillation with which it began. The piano puts down an E major chord, but the final note is a G natural on the viola, leaving the E major chord to sound on as a distant, troubled memory of peace. 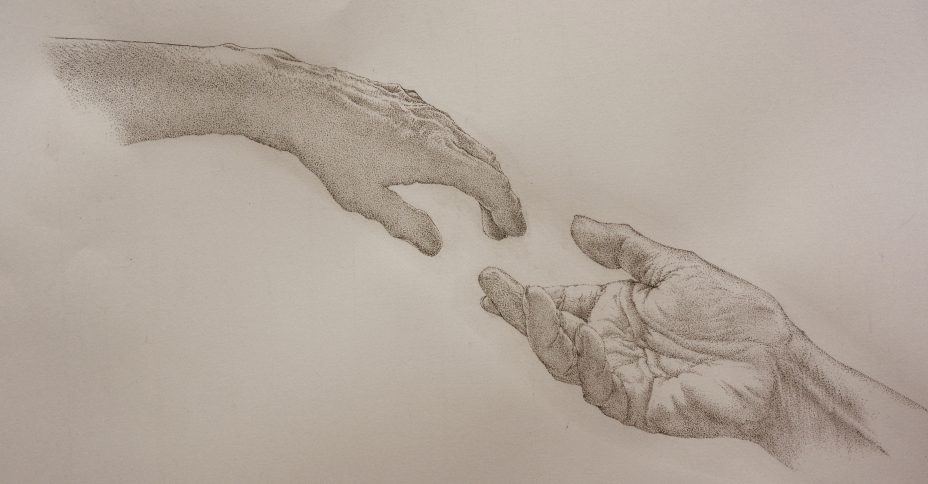 Volume One of Steve Elcock’s Chamber Music will be released on TOCC0506 in the autumn.

Steve Elcock, born in Chesterfield, Derbyshire, obtained an A-Level in music and learnt the violin up to grade 7. As a composer, he is otherwise self-taught, beginning to write from around age fifteen and continuing to do so ever since. In 1981 he moved to France, where he worked in language services until his retirement in 2019. His music, from being unknown to anyone outside a small circle of his friends and family, has now come to the attention of music lovers, conductors and other composers.

That turnaround began with the Toccata Classics release of his Third Symphony, the triptych Choses renversées par le temps ou la destruction and Festive Overture (TOCC 0400). It was released in September 2017 and was almost immediately featured as ‘CD of the Week’ on Record Review on BBC Radio 3 – a rare feat for a work by a hitherto unknown composer. Stephen Pritchard, writing in The Guardian, described him as ‘a phenomenon. […] Now, championed by the conductor Paul Mann, we can start to savour this extraordinary mind. This first disc features his dark, titanic Third Symphony, its unstoppable energy brilliantly captured by the RLPO. […] A triumphant debut recording’. The October 2017 issue of Gramophone issue noted that ‘It is humbling that a self-taught European composer in his sixties can have written such a stack of well-crafted, emotionally honest and non-derivative music’. The Observer described it as ‘Music of awesome power and majesty that has gone completely unheralded. [...] His Choses renversées par le temps ou la destruction pits fragile beauty against brute forces of ignorance, while his Festive Overture is a breathtakingly clever pastiche of Walton and Elgar. [...] A triumphant debut recording’.

The May 2020 release of the second volume of his orchestral works, with the Fifth Symphony, Incubus and Haven: Fantasia on a Theme by J. S. Bach (TOCC 0445), was highly recommended in Fanfare in November 2020: ‘Although Elcock’s distinctive musical universe sounds not quite like that of any other composer, there are influences from such diverse composers as Mahler, Simpson, Nielsen, Pettersson, and Shostakovich [...]. Most enthusiastically recommended, including the compelling performances by the Siberian SO under the secure conducting of Dmitry Vasiliev. A strong Want List contender’. Richard Whitehouse, for Arcana.fm, described the Fifth Symphony as ‘a notable achievement […] in what is an absorbing and valuable series’. The composer has written nine symphonies and other orchestral and chamber works; another Toccata Classics album, a first volume of chamber pieces, released in December 2018 (TOCC 0506), was described in April 2019 in Gramophone as ‘terrific music’. In the same month, it was one of MusicWeb International’s Recordings of the Month: ‘This outstanding disc offers further compelling evidence that the previously unrecognised Steve Elcock is a compositional force to be reckoned with’.