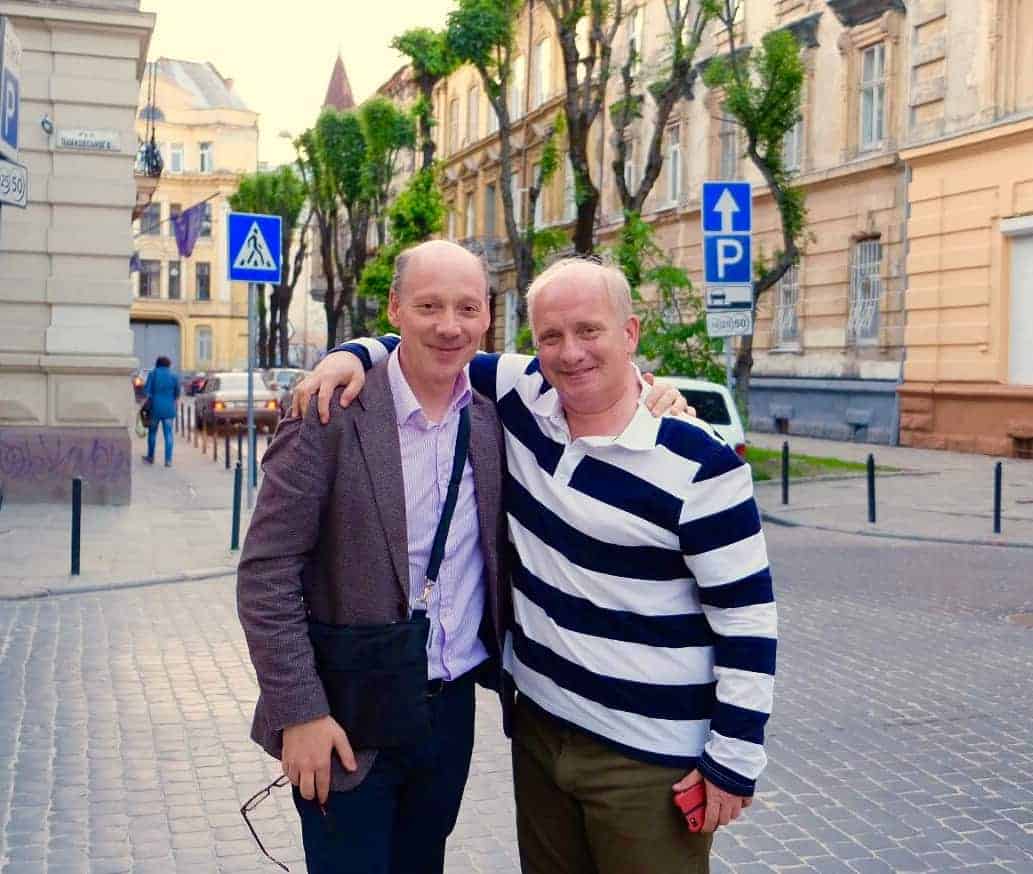 Clive Greensmith and Theodore Kuchar in Lviv, following the completion of the final recording session for Volume One

My friend and colleague Clive Greensmith and I were sitting in the audience of a concert, during which our violinist and pianist colleagues were performing a sonata before we joined them for a performance of the Dvořák Piano Quartet in E flat major, Op. 87. As we awaited our summons, Clive recounted the story of an extraordinary discovery he had made, through a special project at the Colburn Conservatory in Los Angeles. He was telling me about the compositional output of Pál Hermann (1902–44), specifically his Cello Concerto. At the Conservatory, Clive had recently premiered its substantial (and complete) first movement, in its piano reduction, with the pianist Beth Namin in spring 2016, and he spoke with infectious enthusiasm about the work and his ambition to realise the complete concerto, with orchestra, both in performance and recording. As he elaborated, I learned about the tragic circumstances leading to the Hungarian cellist-composer’s untimely death at the hands of the Nazis.

Approximately four months later, we spent an all-absorbing week in Lviv, Ukraine, preparing the Cello Concerto for both concert and recording. The sentiments engendered by this highly concentrated period were intense for everyone involved in the sessions. Given that the composer’s history and his compositions were familiar to all of those involved in the project, each one of us was fully aware of the significance and responsibility of doing justice to Hermann’s creations. Many thoughts passed through my mind during every stage of the sessions: Bartók, Kodály, Leó Weiner, nostalgia – and the eternal reality which was to soon await Hermann. I was conscious, throughout the rehearsals and recordings, of something both tangible and elusive about our week in Lviv. When the composer Fabio Conti was identified as being responsible for the reconstruction of the Cello Concerto, I was able to pinpoint the impression which had eluded me, but it wasn’t until years later that its significance became completely clear to me.

As the violist in Volume Two, devoted to the chamber and instrumental music of Pál Hermann, I was present or involved in the April 2021 rehearsals and recordings of the ‘Suite’ for solo violin, Duos Nos. 1 and 2 for violin and cello, Invenzioni a tre voci for violin and viola, the String Trio and the Piano Trio. As I listened with wholehearted enjoyment, I was constantly struck by the conviction that not only was there something that sounded very familiar to me in each of these works, but I also couldn’t shake off the feeling that I had been intimately acquainted with them in the past. I found myself becoming almost irritated by the fact that I was unable to recollect from where these memories originated. As the sessions progressed, however, I finally saw the light when I realised that I was encountering the Cello Concerto in its various original forms – Fabio Conti had used these works to reconstruct the Concerto using ‘genuine’ Hermann, so to speak. These chamber and instrumental works are exceptional in their originality, thematic depth and incorporation of folk idioms, allied to a consummate knowledge of the technical specificities of each of the instruments for which the pieces were composed. Whether performing or listening, everything on this album has given me immense pleasure and unquestionably deserves to outlive us all.

Theodore Kuchar presently serves as the Artistic Advisor and Principal Guest Conductor of the National Philharmonic Orchestra of Ukraine, Lviv. He is also the Artistic Director and Principal Conductor of two of Europe’s leading orchestras, the National Symphony Orchestra of Ukraine (since 1994) and the Janáček Philharmonic Orchestra (formerly the Czech Radio Orchestra), while also serving as the Principal Conductor of the Slovak National Symphony Orchestra and Slovak Sinfonietta. In September 2018 he began a relationship with the National Opera and Ballet of Ukraine and has a close association, totalling over 300 performances, with the Finnish National Opera and Ballet. Guest-conducting engagements have taken him to the BBC National Orchestra of Wales, the BBC Symphony, Cape Town Philharmonic, Czech Symphony, English Chamber, Israel Symphony, Munich Philharmonic and Prague Symphony Orchestras, the National Symphony Orchestra of Venezuela and Staatskapelle Weimar. He continues to commit several periods annually to one of his most serious passions, the performance of chamber music, and has been a participant at major international festivals, including Kuhmo, Lockenhaus, the Australian Festival of Chamber Music and the Nevada Chamber Music Festival. He is one of the most frequently recorded conductors of his generation and has appeared on over 130 albums on the Brilliant Classics, Marco Polo, Naxos, Ondine and Toccata Classics labels.
Categories : Guest Blog
Tags : Clive Greensmith, Pál Hermann, photos, Recording Sessions, Theodore Kuchar
Previous Post →
← Next Post