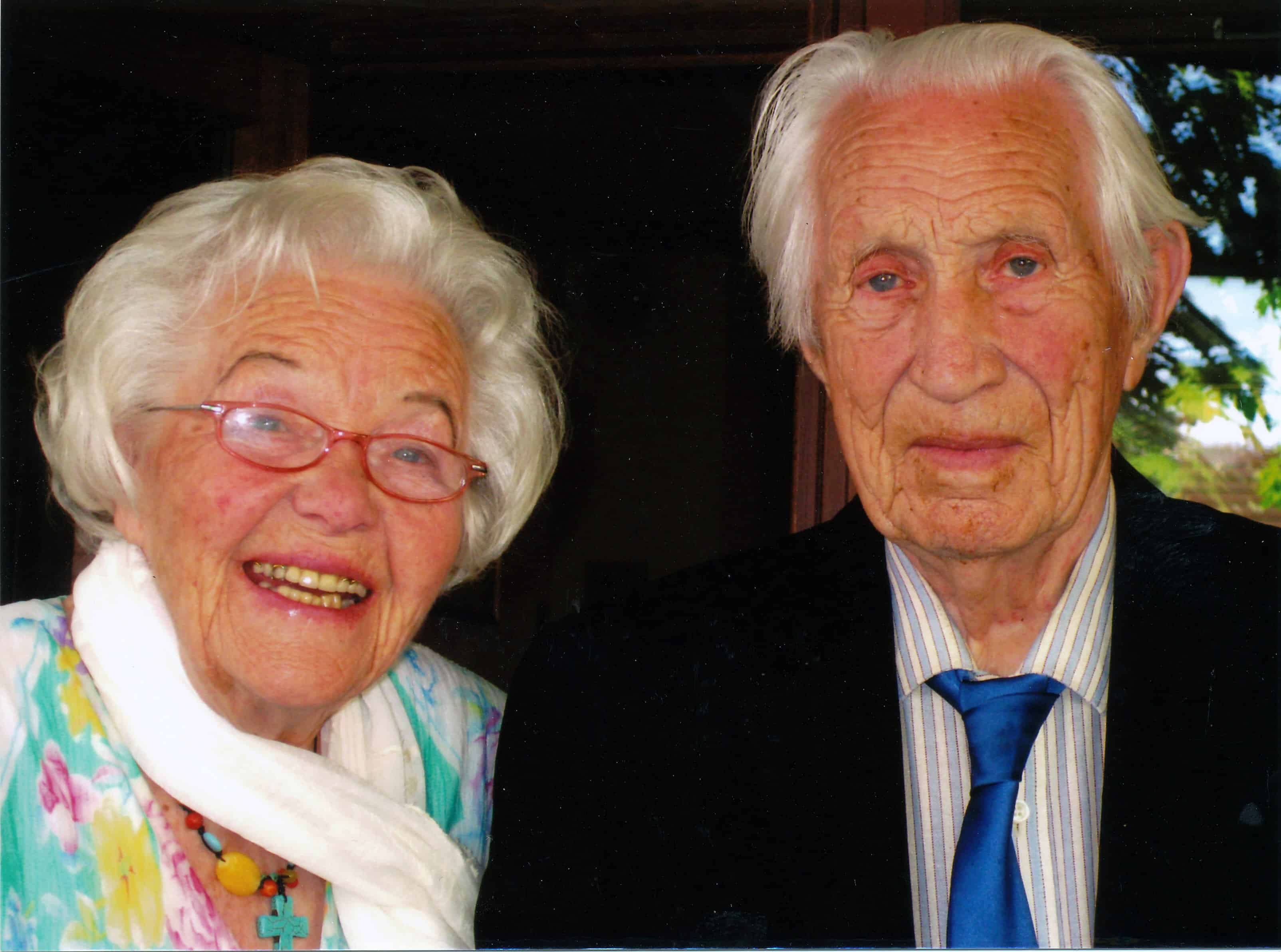 Leif Solberg and his wife, Reidun, whom he married in 1940 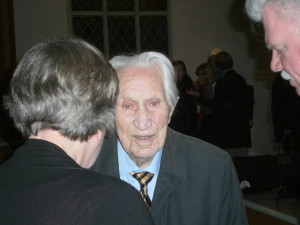 Solberg greets a wellwisher after one of his centenary concerts

The death of the Norwegian composer, organist and choirmaster Leif Solberg – in Lillehammer, during the evening of 25 January – has just been announced. The sadness of the news is offset by the knowledge that Solberg had reached the grand old age of 101, and that enough fuss was made around the time of his centenary in November 2014 for some of the noise to be heard abroad. And I’m proud that Toccata Classics was involved in making some of that noise, with a recording bringing together his complete orchestral music, a major choral work and by one of his most important organ works. That recording and the centenary concerts were organised by Tim Collins, Solberg’s English successor as organist of Lillehammer Church, who wrote about them here; and if you want to cock an ear at the recording, click here.

Don’t blame yourself if you don’t recognise Solberg’s name: when he turned up at the Christmas party of the Norwegian Composers’ Union in his early 1980s, they didn’t know who he was either. Solberg has been at best a marginal figure in Norwegian musical life, cut off from the committees of Oslo which decide who gets heard. His isolation was both stylistic – his traditionalist craft sitting ill with the modernism that ruled Nordic roosts in the second half of the twentieth century – and literal, since he contented himself with the low-profile rewards of galvanising musical activity in Lillehammer, three hours’ train-ride north of Oslo. Still, for all the obscurity which attended his career, Solberg was a master, a craftsman whose sure-handed command of his material and transparent sincerity of purpose mark him out as one whose music merits a wide audience.

Leif Solberg was born on 18 November 1914 in Lena, a small village close by Lake Mjøsa, near Gjøvik, to the south of Lillehammer; by the age of seven he was already playing in the marching band conducted by his father, an ex-military musician who had taken up the post of organist at the Hoff church in near-by Toten. The eldest of what were to be nine children, Leif received organ lessons from his father and by the age of ten was sufficiently familiar with notation to copy out the flute parts for the band. By the age of thirteen he was a proficient enough player to deputise for his father. At fourteen the young Solberg, already a very promising musician, began to journey regularly to Oslo to take lessons with Arild Sandvold, Norway’s most important organist.

It was Sandvold, a solicitous teacher, who encouraged Solberg to begin composing, and the young student would regularly arrive at lessons with several variations on some Norwegian folktune or chorale in his bag. He made rapid progress: one of his first major compositions, the Variations on the Folktune ‘Eg veit I himmerik ein borg’ (‘I know a castle in heaven’) dates from 1933, at the end of his period of study with Sandvold, who gave the work its first performance in that year in a recital which was broadcast live. After taking his organ degree in the same year, now aged nineteen he went on to study counterpoint with Per Steenberg, conducting with Trygve Lindeman and, slightly later, orchestration and Schoenberg’s theory of harmony with Karl Andersen. 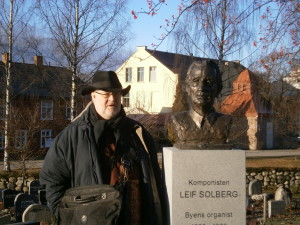 Honoured in his own time: the bust of Leif Solberg by the front of Lillehammer Church (with the author giving an indication of scale)

Solberg was still a student when he composed some of his mightiest organ works, including the Fantasy and Fugue on the Folktune ‘Se solens skjønne lys og prakt’ (‘See the sun’s beautiful light and splendour’) of 1936 and the Fantasy on ‘Av dypest nød jeg rope må’ (‘From deepest distress I must call’) of 1938. Between then and the end of the 1950s he composed the series of nearly twenty contrapuntal masterworks for organ on which his reputation will ultimately rest. In these towering edifices Solberg shows, besides his flair for natural counterpoint, a sense of dramatic pace and instrumental colour and a sure handling of Bachian fugal texture that makes his organ output a worthy successor to Reger’s mighty corpus – a less anguished and chromatic one, perhaps, but distinguished by the same nobility of purpose and capable of stimulating the same sense of physical excitement in the listener.

On 31 August 1938, at the age of 24 and in preference to 30 other applicants, Solberg took up the post of organist in Lillehammer. The new appointment took almost all his time. As well as his responsibilities in the organ loft, he conducted the choir and the local orchestra, and when he took up a teaching post at the local high school, he acquired an army of students, sometimes as many as seventy or eighty at a time. Unsurprisingly, his composing had to take a back seat, and after the rush of compositions in his early twenties, he settled into relative quiescence.

Nonetheless, in 1951 he responded to the suggestion of his former teacher, Karl Andersen, that he should attempt a symphony, and the work which resulted, composed in 1951–52, is his only original orchestral work (the other three in the recording are arrangements or orchestrations). In 1953 the Symphony was given a run-through – nothing more – by Odd Grüner-Hegge and the Orchestra of the Oslo Philharmonic Society. In 1996 I heard a cassette copy of that recording and knew that here was a vital and urgent piece of music waiting to be uncovered – never dreaming for a moment in those days that two decades later I would be releasing the first commercial recording on my own label. 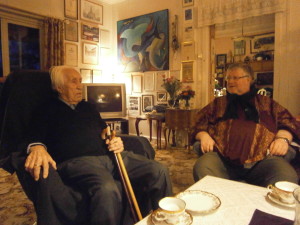 Coffee at the Solbergs: the 100-year-old composer relaxing out of the centenary limelight

Back in 1996 my first step was to take the score to the conductor Gary Brain, a neighbour in Paris, where I then lived (Gary died in April last year; you’ll find an interview with him here). Before three pages were past Gary had slapped the table with excitement and enthused unprintably about the work, and at the end of that first audition had vowed to give the work its first professional performance. An engagement to conduct the orchestra of NRK, the Norwegian broadcasting organisation, in October 1998 provided the occasion to do so. Solberg’s reserve was such that Gary’s request for a meeting to discuss interpretative detail went unanswered; he almost had to be summonsed to go through the score with the conductor before the sessions. At one point Solberg, who didn’t have a score of the work at home (‘I think I lent it to someone’), remarked calmly: ‘Actually, it’s better than I realised’.

A review of the 2014 recording in Fanfare agreed, calling it ‘easily one of the finest Neoclassical symphonies to have emerged from Scandinavia, since it’s easily one of the finest written anywhere after the War’. Paul Mann, who conducted those 2014 sessions with the Liepāja Symphony Orchestra in Latvia, had already said something similar in his booklet essay with the release, describing the work as ‘undoubtedly one of the most compelling symphonies of the post-War years’, and since the work is dedicated to the memory of a brother killed as a result of a wound during the Second World War, Paul suspects that the score may have had a very deep personal resonance for Solberg. He could well be right. Before the 1998 recording – just for the Symphony at that point – I had made sure he knew that he could bring family and friends to the recording sessions. But on the first day he came on his own – and sat in the very last row of the auditorium, with two rivulets of tears running down his craggy cheeks. On the second day he came with his wife, one of his two daughters and one or two close family friends. We went to the NRK canteen afterwards for a coffee and a celebratory slice of cake, and I asked him what his feelings were, having just heard his Symphony receive its first professional performance in the half-century since he wrote it. ‘Jeg er stolt som en hann’, he said, grinning for the first time since I had met him – ‘I’m proud as a cock!’

I run the CD label Toccata Classics and publish books on classical music as Toccata Press; I also write a bit about music in various publications in Britain and abroad. My degree (from the University of St Andrews, in 1977 – I’m a Scot) was in mediaeval French and German, and thereafter I worked in economics for twenty years, in London and Paris; I’ve been back in London since 1997. The main thrust of the postings in this blog will be in classical music, but since I am a secular liberal and free-marketeer with a healthy contempt for politics (economics is the study of the creation of wealth, and politics is the process by which it is wastefully dispersed) and a guarded resentment of religion, please don’t be surprised if I occasionally thump the tub on issues other than forgotten composers and other aspects of the musical world.
Categories : Composer News, News
Tags : Leif Solberg
Previous Post →
← Next Post