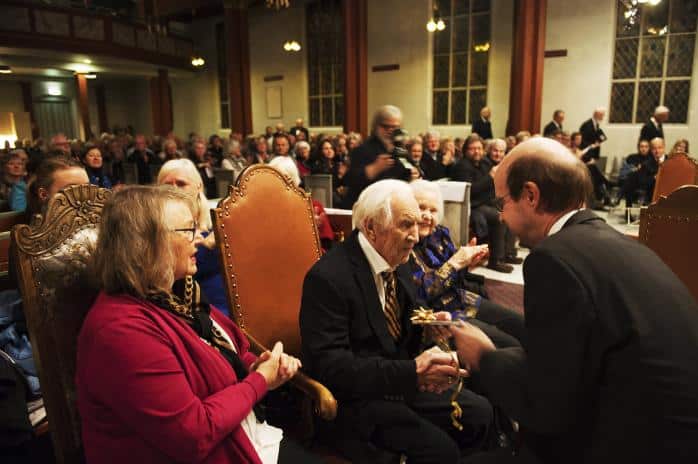 Organist Tim Collins presents Leif Solberg with the Toccata Classics CD of his music to mark his 100th birthday. 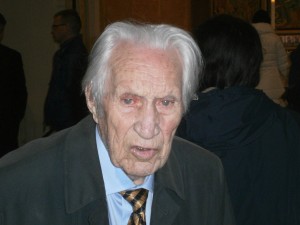 Leif Solberg leaving Lillehammer Church, where he was organist for 44 years

If the name of the small town of Lillehammer in Norway rings any bells for you, it is probably as the site of the 1994 Winter Olympics, or of the awful TV comedy Lillyhammer. Probably not because of the music of Leif Solberg.

I arrived here as organist nearly twenty years ago, and knew Solberg had been an illustrious predecessor at Lillehammer Church, holding the position from 1938 to 1982. I also knew that he had composed what I thought were just a few organ pieces. A request from me for some of the scores prompted the comment ‘Ah, the sins of my youth!’ Some sins …

Gradually I discovered a repertoire of mighty post-Reger organ works. Then a cantata, a quartet, a violin sonata and a symphony. All composed before he was 40, when he suddenly stopped writing. Would that he had sinned a little more, and a lot longer!

One wonders, too: why have the works that we do have been so little played? Especially the amazing Symphony, a far better piece than much else of its kind written since the war. OK, Solberg is a modest man, but why has his town – indeed, his country – done virtually nothing to promote him? 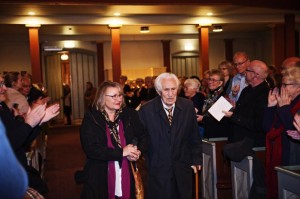 The audience in Lillehammer Church welcomes Leif Solberg to his 100th-birthday concert on 18 November 2014.

Fast forward to 18 November 2014, and it’s Solberg’s 100th birthday. Both national and local radio covered the event, with interviews and excerpts from the new Toccata Classics CD. For Solberg himself there was first a lunch reception at the Freemasons’ Hall. Asked by a TV crew how it felt to be 100, he replied: ‘Like any other day, except I’m not used to being woken up so early!’ Then it was over to the church for a birthday concert, Solberg attending again with his wife Reidun, who is somewhat younger at the age of a mere 94.

Local choirs sang Solberg’s setting of Psalm 8 and his Missa Brevis. Edvard Erdal gave a polished rendition of the exciting Violin Sonata, with Paul Wilmot elegantly accompanying. Then the Pastorale was given a worthy performance by the town orchestra, the Quartet in B minor played by the Engegård Quartet, and finally Halgeir Schiager on the organ performed the Fantasy and Fugue on the Folk-Tune ‘Se solens skjønne lys og prakt’.

At the concert Leif was presented with the CD of his music that Toccata Classics releases internationally on 1 December. Here for the first time the Symphony has been recorded, together with the other three orchestral works, recorded in Latvia by the excellent Liepāja Symphony Orchestra, conducted by Paul Mann [read Paul Mann’s comments on Solberg’s orchestral music here]. 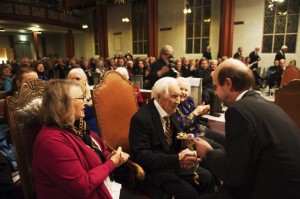 Organist Tim Collins presents Leif Solberg with the Toccata Classics CD of his music to mark his 100th birthday.

Also on the CD is the Good Friday Meditation, sung by the Solberg Centenary Singers (founded for the occasion, as the name reveals), conducted by Marit Tøndel Bodsberg, and the big organ Fantasy and Fugue on ‘Se solens skjønne lys og prakt’, both expertly recorded by Ola Dahl (and with me at the organ console).

The Saturday after the concert brought a ‘Pre-Proms’ style talk in Lillehammer Church with Martin Anderson of Toccata Classics and Roger Andreassen, local Solberg expert, grilled for the occasion by myself, followed by a ‘photo-op’ at Solberg’s bust at the front of the church. Then up to Solberg’s house for a quiet sherry celebration of the CD release, with Leif and Reidun and their daughters Liv and Eli, and cat. A house full of flowers, presents, cards and, of course, a telegram from Harald R. – the King of Norway.

The week of celebrations was rounded off the next day with another concert, with the Innlandet Filharmoniske Orkester giving a solid performance of the Symphony, conducted by Øyvind Gimse – astonishingly, its first public performance by professional musicians.

How is the 100-year-old composer taking all this activity? On the one hand he’s very grateful that his music is being recorded and played. On the other, he’s somewhat confused – why now, all of a sudden, after all these years? A good question, to which one can only answer lamely, well, better late than never.

Recordings of more of his chamber music and organ music are under consideration, and Martin told Leif that he hoped to be back to celebrate his next birthday with another CD under his arm. ‘Hvis man lever!’ he shot back with a grin – ‘If I’m alive!’ 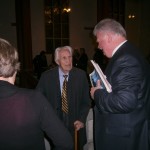 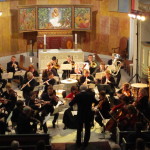 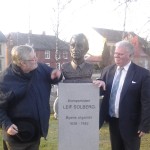 Martin Anderson and Roger Andreasen, former Solberg student and now the expert on his music, by the bust of the composer in front of Lillehammer Church 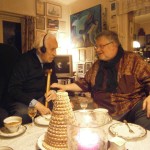 Sherry at the Solbergs: Martin Anderson in conversation with the birthday boy 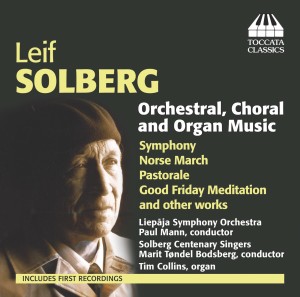