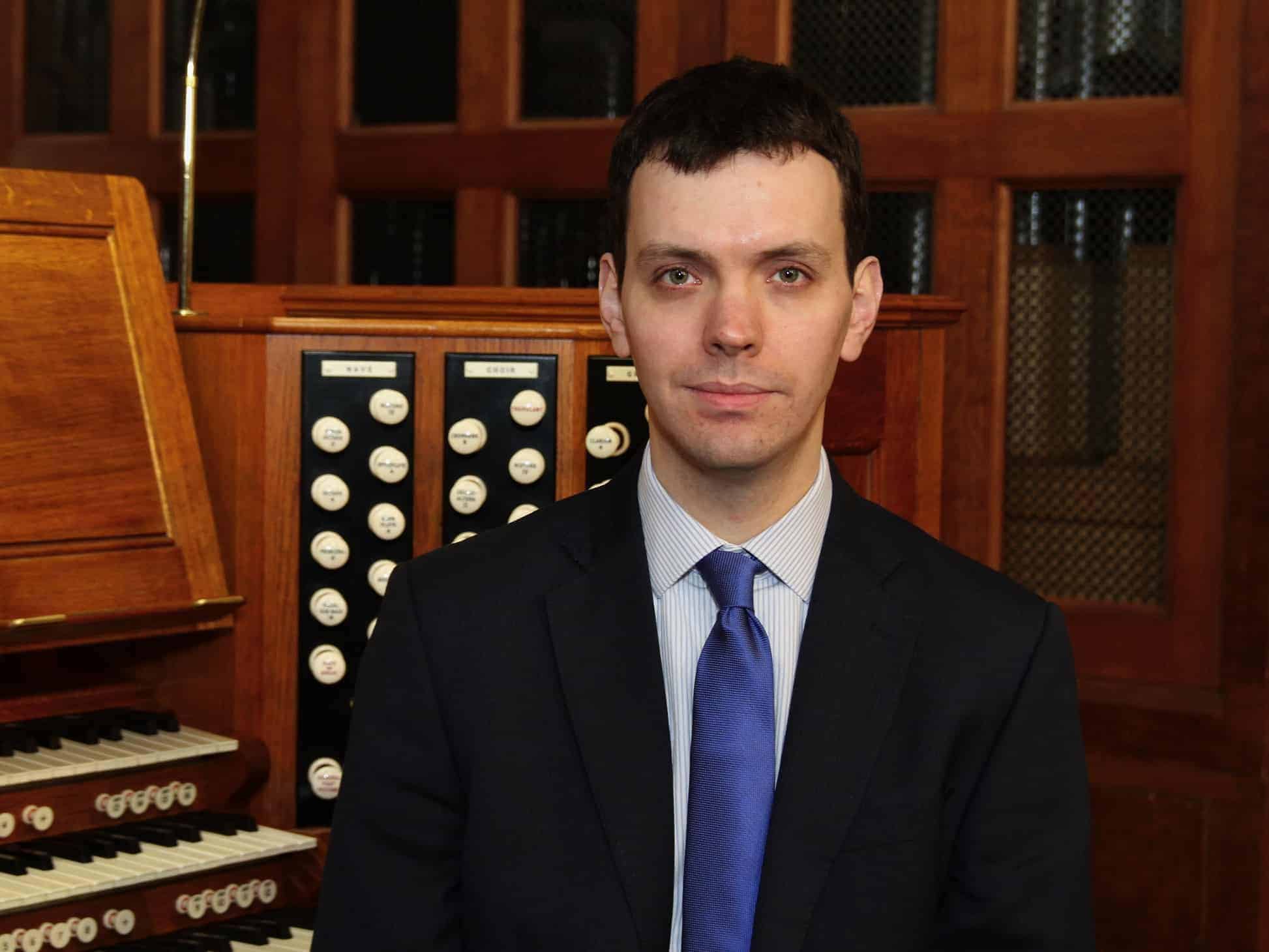 Elisabeth Lutyens is not a composer usually associated with the organ. For most of her life she inhabited a musical world which was very much separate from organ lofts and church music. Indeed, her sole contribution to Anglican choral repertory – a Magnificat and Nunc Dimittis (1965) for Coventry Cathedral – is fearsomely difficult to pitch, and remained unperformed until its recording in her centenary year. Lutyens’ organ music similarly refuses to conform to the type of quiet prelude or festal postlude which may have been attractive to church organists. Her organ works are almost exclusively secular in origin, being composed for concert performance.

The works span almost her entire career, although the earliest works were unpublished, and the first work to receive publication, the Sinfonia (1955) – which had been premiered at the Royal Festival Hall alongside an early work by Malcolm Williamson – was issued only in a facsimile of the composer’s manuscript by Schott in the early 1960s. Lutyens’ subsequent organ works were self-published through her company, the Olivan Press. These later works are now issued by University of York Music Press.

A principled woman of tremendous determination, Lutyens was intent on studying composition at the Royal College of Music. Her persistence paid off, and she was assigned to Harold Darke, the organist of St Michael’s Church, Cornhill, and a composer of much well-crafted church music. Darke principally taught harmony and counterpoint at the College, but he took pride in nurturing Lutyens’ compositions and supporting their performances. In retrospect, it appears to have been an unlikely alliance, but Darke’s modesty and calm demeanour must have proved the perfect foil to Lutyens’ fiery personality: the two remained in touch until late in life, and each even dedicated an organ work to the other, albeit almost 40 years apart.

Darke also taught Lutyens to play the organ, and in the 1930s she held a church post in Woolpit, near her cottage ‘Braughles’ in Suffolk. During this period, she appears to have become particularly fond of seventeenth-century organ music, as evidenced by her arrangements for string ensemble of organ works by Buxtehude, Titelouze and Frescobaldi. With Darke she had studied Bach’s chorale preludes; her own Chorale Prelude (on the melody ‘St Mary’), a fugal work in the Aeolian mode, seems likely to date from her student years, and gives an insight into her studies with Darke.

The unpublished Suite (1948) is perhaps a good example of Lutyens’ mature style. Working by now within strict serial procedures, its four very concise movements are packed tightly with expressive phrases and a broad range of tone-colour. Arnold Richardson, the Wolverhampton Borough Organist, premiered it in a recital as part of the 1951 Festival of Britain; on the manuscript, Lutyens records ‘numerous’ subsequent performances by him. Judicious selection of stops and frequent changes of registration invigorate the music: however, these registration decisions are at the discretion of the performer.

In some works, such as the Sinfonia and the large-scale Temenos (1969), Lutyens is unwittingly restrictive in performance indications: strict adherence to 8′ or 4′ pitch markings sometimes precludes certain colourful stop-combinations which would benefit the music. In performing the works, I have therefore been guided by the principles of orchestral colour, which, alongside her mastery of textural control, is a central tenet of Lutyens’ music, and for which she had an acute sensitivity.

The sequence of incidental music to A Sleep of Prisoners (1966) steps away from the serial procedures of Lutyens’ concert music and ably demonstrates her skill at getting directly to the emotional core of any dramatic scene – with each cue meticulously timed. For Christopher Fry’s intense drama, set in a church, she provides passages of music which are by turn wistful, anxious and savage.

The duet Plenum IV (1975) was Lutyens’ last work for organ and was commissioned by Nicholas and Stephen Cleobury for performance at the Royal Festival Hall. Their collaboration with her in preparing the work bears out the importance of orchestral sonority in her organ music, Lutyens having earmarked specific orchestral instruments (for example, ‘alto flute’, ‘horns’ and ‘strings’) against each phrase to help determine the choice of stops. This is the only work which has previously received a commercial recording – on an LP release recorded in the suitably atmospheric surroundings of Westminster Abbey. Lutyens attended a performance, given by the Cleobury brothers at the Abbey to mark the golden jubilee celebrations of the Organ Club in 1976. For all the perceptions of her as an ‘outsider’, judged by those within the rarefied world of Anglican choral music, she was observed after the recital in enthralled conversation with Herbert Howells (by then the doyen of Anglican choral and organ composition), a friendly acquaintance from her student days at the Royal College of Music.

It has been a delight to collaborate with the soprano Philippa Boyle on two of the tracks: the opening vivid wedding piece Epithalamion and the melancholic Nativity, which set evocative poems by Edmund Spenser and W. R. Rodgers respectively. Her enthusiasm for preparing and researching these neglected works has been inspiring and she writes about them here.

Tom Winpenny is Assistant Master of the Music and Director of the Cathedral Girls’ Choir at St Albans Cathedral; previously he served as Sub-Organist at St Paul’s Cathedral. He studied at King’s College, Cambridge, where he was Organ Scholar. He is a member of the Trustee Council of the Royal College of Organists.

His extensive discography includes solo organ discs for Toccata Classics of music by Malcolm Williamson (TOCC 0246: ‘this disc, impressively realised by Winpenny, presents six pieces culminating in the grand Symphony for Organ’ – Sunday Times, 4 May 2014); John Joubert (TOCC 0398: ‘Reflections on a Martyrdom from 1997 [is] brilliantly played here by Tom Winpenny. Attractive preludes on English hymn tunes and a thundering Passacaglia and Fugue make this a must for any aficionado’ – The Observer, 16 April 2017; ‘what you would expect from a guide so consistently articulate and engaging’ – BBC Music Magazine, July 2017; ‘The music is not only splendidly played but splendidly recorded too […]. This release is an important addition to the Joubert discography’ – MusicWeb International, August 2017); and Peter Racine Fricker (TOCC 0518: ‘As organ releases go, this one is outstanding and has my full-hearted recommendation’ – MusicWeb International, August 2017). More recently, he has explored organ music by the American composer Vincent Persichetti, most of it receiving its first recording (TOCC 0549: ‘Tom Winpenny delivers these complex works with grit – Choir & Organ, September/October 2020; ‘The real reason to acquire this disc is that it includes a recording of what is Persichetti’s finest organ work: Auden Variations (1977). [...] Winpenny’s performances are compelling throughout’ – Fanfare, September/October 2020).

For Naxos he has recorded five volumes of music by Olivier Messiaen, in addition to discs of organ music by Judith Bingham and Francis Pott, and albums of choral music by Michael Haydn, William Mathias and Felix Mendelssohn. He has also recorded music by Lennox and Michael Berkeley, John McCabe and Charles Villiers Stanford for Resonus Classics.