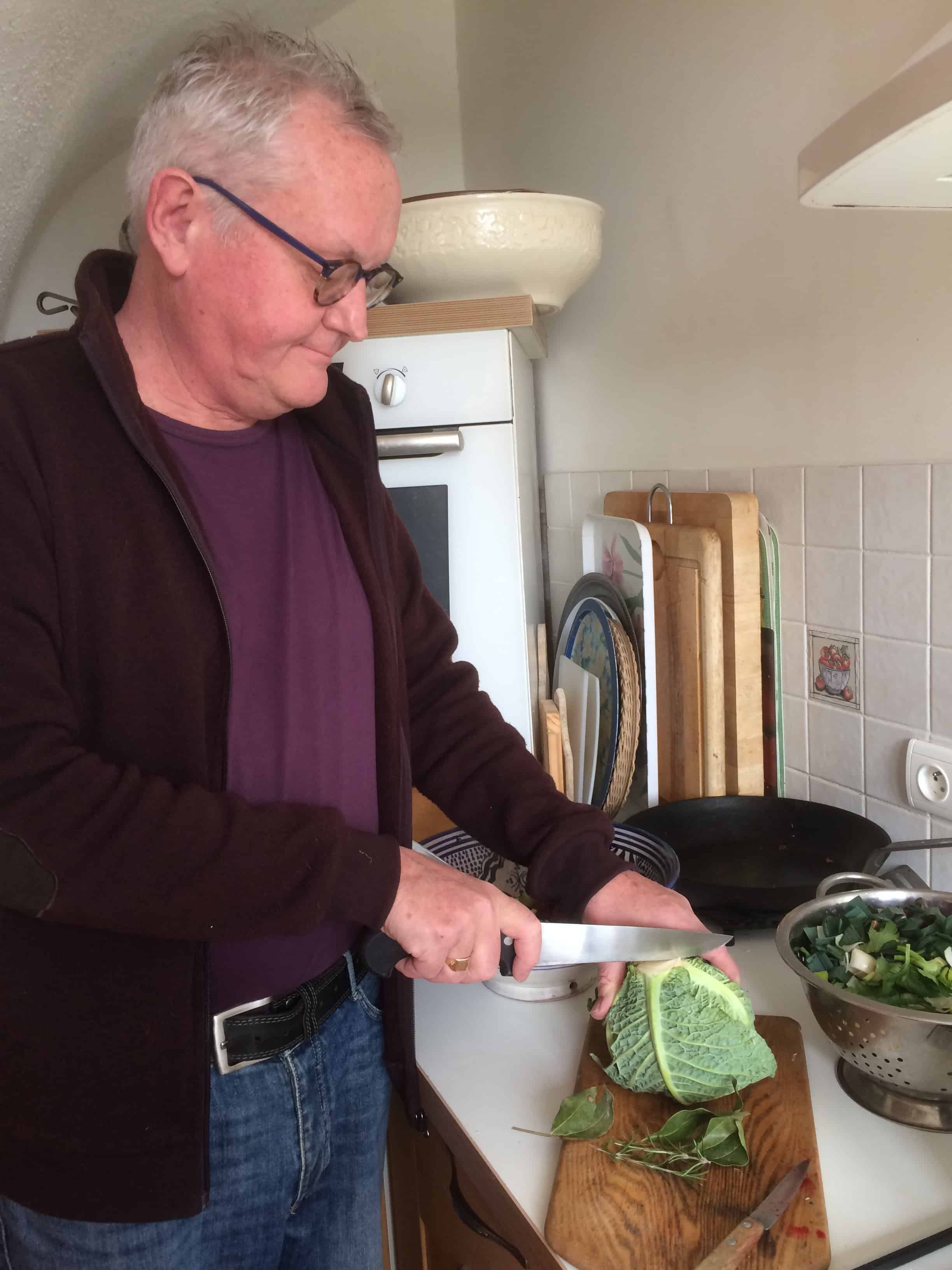 Steve Elcock preparing one of his choux renversés…

After I posted a recipe on one of the social networks, two composer friends suggested, jokingly, that I should come up with a recipe for writing a symphony. I dismissed the idea, until one of them shared an amazingly silly – though I suspect not intentionally so – ‘wiki how’ article entitled ‘How to write a symphony’. In addition to such edifying pieces of advice as ‘Get inspired’, the article also featured hallucinatory questions from readers like ‘Can I work on my symphony while my girlfriend is here?’ and ‘How many symphonies should I write?’

I was hooked. As a reaction, and thinking (perhaps pretentiously) that I could offer some more useful advice about writing symphonies, I decided to have a go.

Of course (and the statement is so obvious that I almost refrain from making it), there can be no ‘recipe’ for writing a symphony, if only because there is no clear-cut definition of what a symphony is. Between Hans Keller’s famous ‘large-scale integration of contrasts’1 and Michael Crump’s definition (less than helpful, by his own admission) that ‘a symphony is any work which its author has decided to call a symphony’,2 the aspirant symphonist doesn’t have much to go on. Fortunately, though, through listening to many symphonies of all kinds, one does form an instinctive idea of what is symphonic and what isn’t, and I’m assuming such awareness in this article.

Instead of a recipe, then, here are some ideas from my own experience that may either illuminate or irritate the reader (either would be good). They don’t all apply only to symphonies, of course, but as I believe that writing a symphony is the supreme challenge a composer can undertake and is therefore not to be gone into lightly, they are all aimed at heightening that sense of serious endeavour without which no symphony would ever have been labelled ‘great’.

Two cautionary notes before I begin:

First, don’t write a symphony just for the sake of it. Have something to say, preferably something urgent. There are too many symphonies out there that needn’t have been written. Your symphony must grab your listeners by the throat and not let them go till the last note has ended.

Don’t try to reinvent the vernacular. James Joyce did that in Finnegan’s Wake, and fortunately for the world of literature he had few followers. A similar rejection of the vernacular in music did have followers, however, and the received idea that contemporary music has to be cerebral and difficult to listen to is the result. But without indulging in modernism-bashing, my point is that it is not necessary. There’s so much still to do in the common parlance of music, as I hope the suggestions below will indicate.

Run ideas head-on into each other. Start a new idea before the previous one has finished, first bringing it in in the background to plant it in your listener’s mind, then bring it back later, by which time it has become something else.

Have a simple idea, possibly even a tune, in the foreground, and have daft stuff going on in the background. Listen to Schnittke’s Viola Concerto, bars 217–46 of the first movement, if you don’t know what I mean (c. 11’20”–14’22”). In this example, the strong tonal progression is projected by piano arpeggios, and it almost doesn’t matter what notes are used in the background to spice things up. But therein lies a difficulty: you must find a rationale for the notes you choose, at the risk of undermining the inner logic of the piece, especially if it’s a symphony.

Have a long, sustained passage gradually attacked by the orchestra. Create passages of fragile beauty and then smash them like a sledgehammer through a stained-glass window and see who wins. Sometimes the beauty will; sometimes the violence, like Orwell’s jackboot. Or something totally new may emerge out of the conflict, like the hurdy-gurdy man at the end of my Choses renversées par le temps ou la destruction (the cheap waltz starts at about 8’20”).

Good symphonies proceed by building and releasing tension. To build tension, sit your music over the wrong pedal note: A minor-ish music over an A flat pedal, or a B flat pedal, for instance.

Use harmonies based on intervals other than thirds. Quartal works well for me: it allows flat and natural, or natural and sharp versions of the same note (a major seventh apart, of course, and not a semitone) within the same chord: crunchy! Try putting quartal harmonies over a pedal in another intervallic relationship – a third, say.

Try out different scales. Octatonic is full of possibilities, despite its symmetry.

The tonal/atonal debate is sterile. Use both. Use as many techniques that composers have developed over the centuries as you can forge into a personal, coherent style. But don’t get bogged down in, or obsessed by any one of them, and remember that technique-oriented music is the last resort of the uninspired.

Create insect-like backgrounds – with aleatoric pizzicati, for example. Change-ringing sequences derived from campanology also generate ever-shifting backdrops to more in-focus material. Try sheets of quiet string-clusters if you’re looking for something more static. But if you can find a rationale for having them slowly evolve, that will be even better.

Don’t worry too much about harmony: having horizontal lines with direction and impetus is more important than the resultant vertical cross-section.

Don’t hide a passing lack of invention behind the percussion. Don’t add any percussion until you’re sure that your musical argument is watertight.

Set yourself a challenge or impose a constraint, completion or resolution of which will almost automatically create a structure for your music. In my orchestral work Hammering I wanted to write a piece in which resources would initially be very limited – just the note E above middle C to start with. Notes then become available on either side of that note, by semitones, and the rate of addition of more notes increases as the piece progresses. This organisational technique all but guarantees a sense of growing excitement (go on, have a listen: it’s only seven minutes long).

Don’t tell your listeners things that they already know. Don’t repeat yourself, unless you’re aiming for an obsessive build-up, and if you are, be relentless.

Aim to scare the shit out of your listeners. I still haven’t recovered from the seismic move from a dominant ninth in E minor to an F minor chord in the middle of the first movement of Bruckner 9 (4’47”–15’16”) since I first heard it over 45 years ago. If you’re a genius like Bruckner, you can do it like him, by means of long-term tonal planning. But it’s much harder than it looks. And if you’re not, you can do it like me by reducing the orchestra to something like a piccolo and a solo violin, pianissimo, then throwing the whole weight of the orchestra, kitchen sink-like, at your listeners, fortissimo.

Strike a match and it will flare, but not explode. Scrape off the business ends of several matches and lodge them in the cavity formed by a nut partly screwed onto the end of a bolt, then close it up by screwing in a second bolt. Throw it hard at the ground and it will explode with an impressive bang. So with music. Don’t let passages of boiling anger wander around all over the place: straitjacket the music into constrictive forms (the passacaglia is a good one) till it’s fit to burst.

Most importantly, use any or all of the above without drawing attention to them. A symphony is a constant balancing act between the elements of music, keeping them all sizzling in the pan without letting any one of them take over. Let rhythm predominate to the exclusion of the others and you will have written a ballet; let orchestral colour be the principle source of interest and at best you will have written a tone poem, but more probably something vapid and devoid of real content. Melody should be used sparingly, for it brings the argument to a halt. The great symphonies are built from pregnant motives, not tunes. There’s a passage in Allan Pettersson’s Eighth Symphony which he builds from nothing more than a rising semitone, and it rises to the most overwhelming, long-sustained climax in any symphony I know (c.  9’40”–c. 19’15”).

A symphony is also a journey, and you have the responsibility of getting your listeners from A to B. It doesn’t matter what speed you travel at, and you can linger over a beautiful view on the way. But don’t lose your sense of direction. Don’t dawdle. Don’t rhapsodise. There are several examples of symphonies where, after an impressive, vital start, the composer feels he has to move down a gear for a lyrical second subject in a slower tempo. It’s nigh on impossible to get the momentum back once you’ve done that. Don’t do it. Remember that you’re going somewhere. Forget this fact, and you’ll find when you reach the end that all your listeners got off the bus at the first stop.

Don’t write a symphony if you can possibly avoid it.

With thanks to Alistair and Francis

Steve Elcock is a self-taught English composer, living in France, whose music first came to the attention of the public as a result of the Toccata Classics release of his Third Symphony and the triptych Choses renversées par le temps ou la destruction (TOCC 0400), a Radio 3 recording of the week in October 2017. He has written six symphonies and other orchestral and chamber works, and another Toccata Classics album, a first volume of chamber pieces, released in December 2018 (TOCC 0506), was described in Gramophone as ‘terrific music’. www.steveelcock.fr.
Categories : Guest Blog
Tags : composer, Steve Elcock
Previous Post →
← Next Post