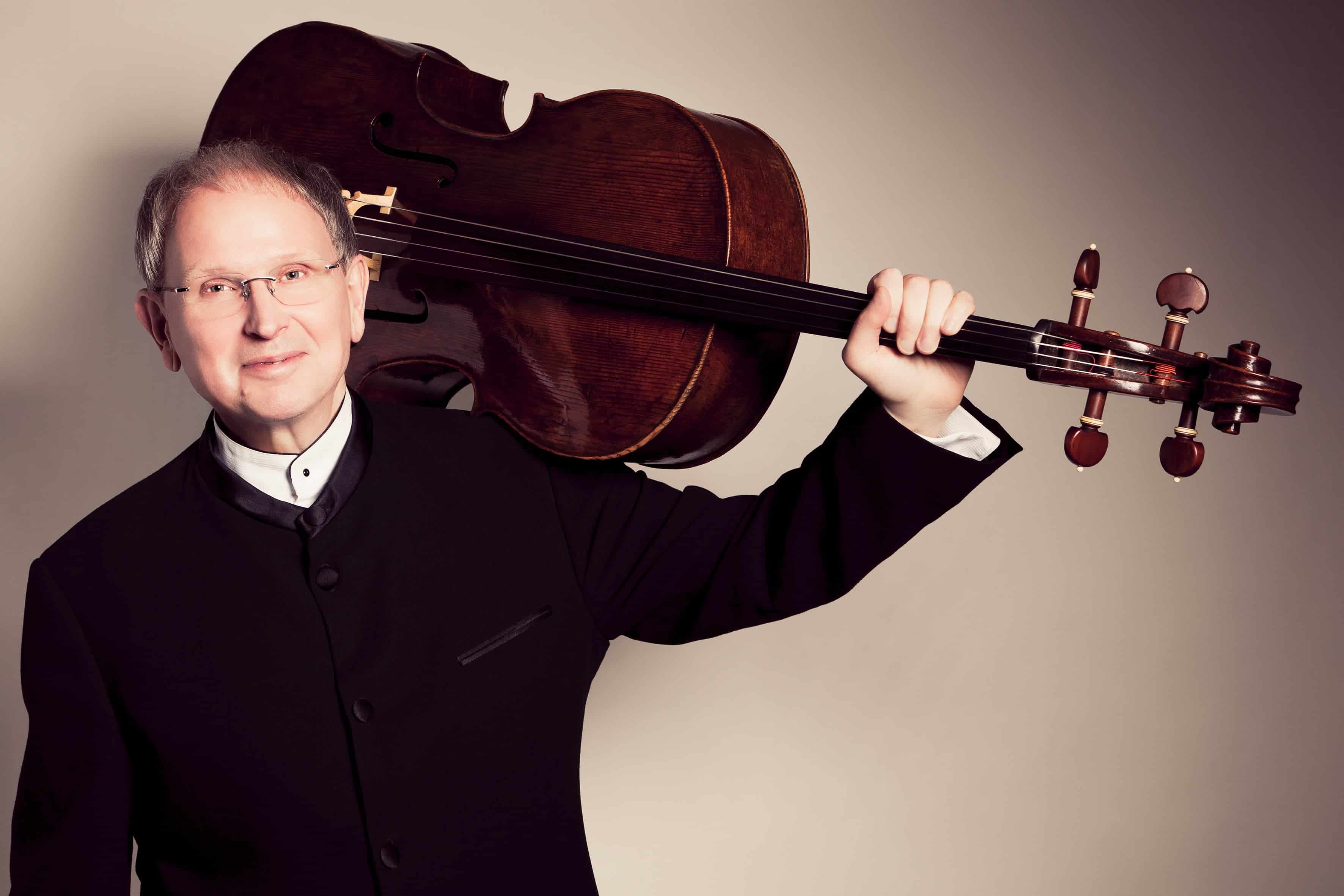 In Moscow in early November 2018, a series of events were staged to honour the memory of Alexander Ivashkin – cellist, scholar and champion of Russian music – who died in 2014. Ivashkin’s vast legacy includes books on many contemporary composers as well as a large number of recordings, including several for Toccata Classics. Gavin Dixon visited Moscow, to present a paper at the Ivashkin conference and to report on the commemorations.

Alexander Ivashkin is fondly remembered in Russia. For the last fifteen years of his career, Ivashkin was based in London, where he was Professor of Music at Goldsmiths, University of London. That proved an ideal base for his life’s work: to promote Russian music to the wider world. As a concert cellist Ivashkin regularly collaborated with Russian composers, organising commissions and premieres, and finding new ways to engage broader audiences with the music of his homeland. Russian music and musicians were also the main focus of his academic activities, with both composers and performers benefiting from his research and promotion. Ivashkin died on 31 January 2014, aged only 65, but his legacy remains strong, as was demonstrated by a series of events staged in his memory in Moscow at the start of November 2018.

As a young student in the 1960s, Ivashkin attended the Gnessin Music College, Russia’s leading music academy for gifted children – Ivashkin was just five when he enrolled. In later years, he regularly returned to the College to give master-classes, and so remained a familiar face there. The Ivashkin commemorations centred around a conference at the Gnessin College. The College also hosted a concert in his honour. The main event here was a performance by the pianist and composer Ivan Sokolov, a long-time friend and collaborator with Ivashkin. Sokolov gave a series of spirited and lucid performances of Bach and Schubert, as well as a work of his own, interspersed with stories and recollections about Ivashkin, his dedication as a performer and teacher, and his lively and always spirited sense of humour. The concert also featured a Beethoven cello sonata, the Op. 17, from veteran cellist Vladimir Tonkha, and two short works from Gubaidulina and Schnittke, both given impressively focussed performances by the ‘Alto Coro’ contemporary-music choir from the College.

Ivashkin was also closely associated with the Moscow Conservatoire. He regularly conducted concerts and masterclasses there, and also promoted its international profile through collaborative projects with institutions in the west, as well as a range of student exchange programmes. That connection was honoured the following day with a concert at the famous Large Hall of the Conservatoire. The programme began with pianist Dmitri Alexeev, a regular collaborator with Ivashkin and more recently a high-profile figure at many concerts organised in Ivashkin’s memory, both in Britain and Russia. Alexeev’s all-Russian programme began with the familiar, the Rachmaninov C sharp minor Prelude, before venturing into Medtner and Scriabin. Alexeev has a distinctive stage presence, his diminutive stature at odds with the breadth and grandeur of his interpretations. He is clearly a pianist of the Russian school, with a muscular tone, but offset by a lyrical, intuitive approach to phrasing.

In the second half, the young cellist Alexander Ramm performed the Prokofiev Symphony-Concerto with the Conservatoire Orchestra, conducted by Alexander Lazarev. Ramm took second prize at the Tchaikovsky Competition in 2015 and is clearly a name to watch. His performance of this complex, expansive work was assured and precise, but with plenty of expression and bravura – mature and commanding in every respect. An excellent performance from the student orchestra, too; the unity of the string section was particularly impressive. The winds, especially the brass, enthusiastically embraced the symphonic dimension of the work, but Prokofiev’s careful orchestration ensured balance and clarity. Lazarev is a larger-than-life figure on the podium. He had clearly rehearsed the orchestra well, and didn’t need to worry about controlling the ensemble, directing his attentions instead to the broad expressive canvas of the music, and to following the moods and gestures of the solo line. The feeling here was of celebration rather than memorial, which seemed fitting. The event drew a capacity audience at the huge hall, a truly memorable event.

The conference was held the following day, back at the Gnessin Academy. I opened the proceedings with a paper on my recent research on Schnittke, and also gave a presentation on Schnittke Studies, a volume that I edited, and that is dedicated to Ivashkin’s memory. The following speakers discussed works by composers with whom Ivashkin had worked. Irina Snitkova talked about Faraj Garaev, Tatiana Tsaregradskaia about Arvo Pärt and Ekaterina Kuprovskaya about Edison Denisov. There were also two papers looking specifically at Ivashkin’s work, one from Yulia Pantaleeva about Ivashkin’s interpretations of the music of Nikolai Korndorf (he recorded Korndorf’s complete music for cello on Toccata Classics), and another from Tatiana Krasnikova on concepts of style and canon in Ivashkin’s theoretical writings.

Full credit to Yulia Pantaleeva, a lecturer at the Gnessin Academy, for organising the conference, and also to Natalia Pavlutskaya, Ivashkin’s widow, for instigating this week of events. Pavlutskaya organised a similar conference at Goldsmiths last year, and, as well as her teaching commitments at Trinity Laban, is devoting much of her time to continuing Ivashkin’s work. When I spoke to her after the conference, she told me about the many projects Ivashkin had been planning at the time of his death. She is dedicated to continuing many of the student support and cultural exchange schemes that Ivashkin instigated, and many of these will come to fruition in the years ahead.

Pavlutskaya also told me about Ivashkin’s grave, in the famous Novodevichy Cemetery, and so the following day, on my way to the airport, I went to pay my respects. The Novodevichy is a high-profile cemetery, and since the Revolution it has been the highest honour in Russia to be buried at this small site. Pushing past crowds of tourists, who were being shown round the graves of Shostakovich and Prokofiev, and Bulgakov and Yeltsin, I finally found Ivashkin’s grave, just round the corner from Mayakovsky. The grave describes Ivashkin simply as ‘Cellist, Doctor of Arts, Professor of London University’. Then, at the foot, is an inscription, Proverbs 19:21 rendered in Church Slavonic, ‘Many are the plans in a man’s heart, but it is the Lord’s purpose that prevails’. As Natalia explained, Ivashkin had so many things left to do, but it was God’s will that he be taken so soon. A fitting memorial indeed.

Gavin Dixon is a writer, journalist and editor based in Hertfordshire, UK. He has a PhD on the symphonies of Alfred Schnittke, his thesis supervised by Alexander Ivashkin. Gavin is also a Visiting Research Fellow and Acting Head of the Centre for Russian Music at Goldsmiths. As a journalist, Gavin has contributed to a wide range of music publications including Gramophone, Opera, Tempo, Classical Music and Limelight (Australia). He is also Music Editor of Fanfare, America’s leading classical review magazine.
Categories : Guest Blog
Tags : Alexander Ivashkin, Gavin Dixon
Previous Post →
← Next Post