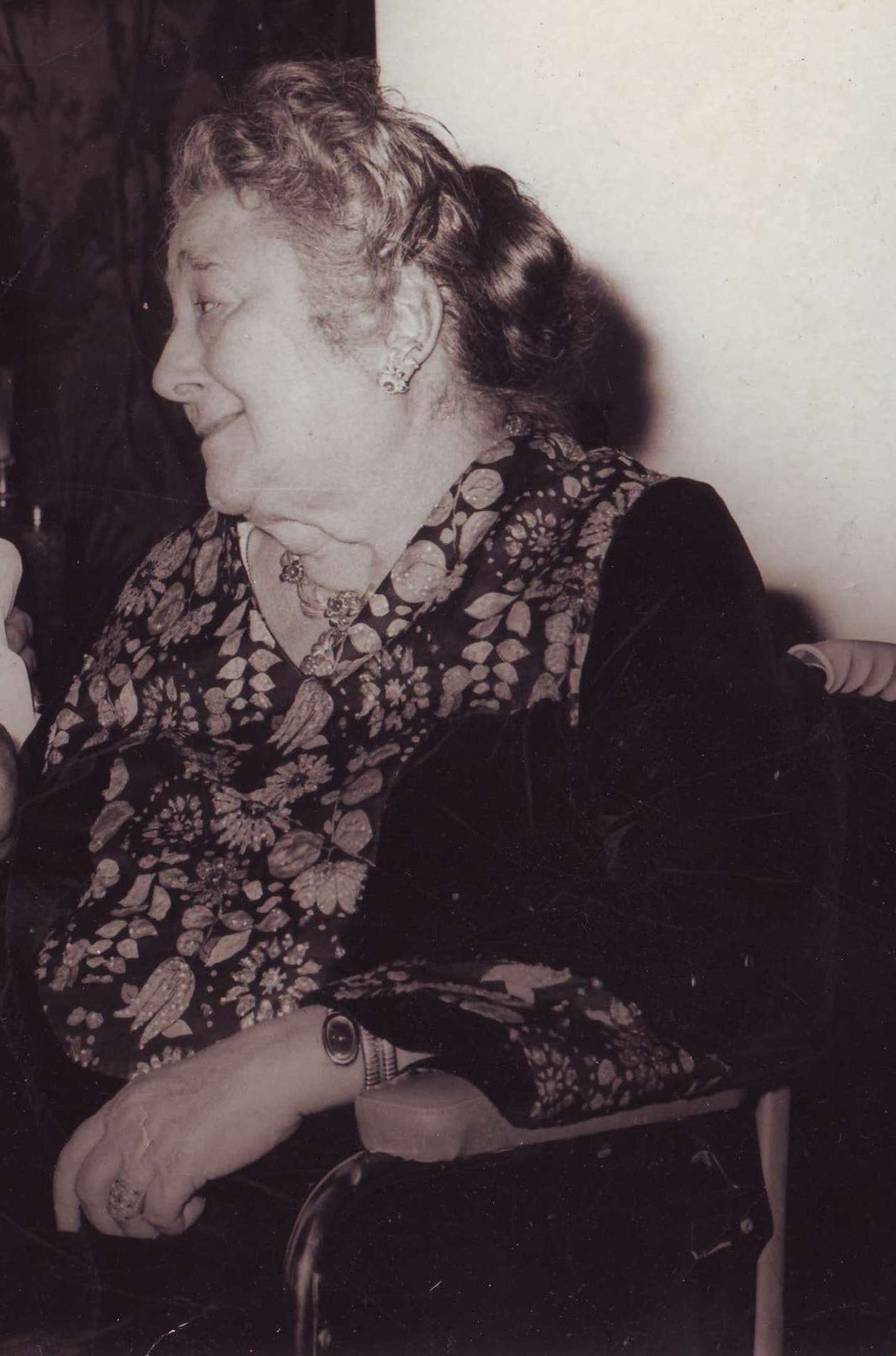 Wheelchair-bound but full of life: Elsa Respighi in old age 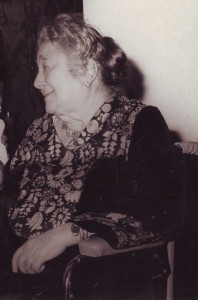 Wheelchair-bound but full of life: Elsa Respighi in old age

In May 1984 I was invited on holiday with some friends who had rented a villa in the hills outside Viareggio in Tuscany, were driving down through France to get there and would be driving back through Germany. It didn’t take me long to agree (the presence of three young children notwithstanding), not least since I had been in touch with the widows of three major composers: Laura Dallapiccola in Florence, Elsa Respighi in Rome and Elisabeth Hartmann in Munich – and I also had an ex-girlfriend in Munich from whom I felt I could count on a warm reception. Several birds with one stone! With the widows, at least, my interests were literary, in that I was already working on the publication that became Dallapiccola on Opera, had discussed with the Australian musicologist Andrew McCredie a book on Karl Amadeus Hartmann and had found, after some searching, an author who was interested in writing a book for Toccata Press on Respighi – on whom there was nothing in English except for an abridged translation of Elsa’s biography of her husband, a small book published by Ricordi in 1962. I’ll write about Laura and Elisabeth at some other point, but since next month it will be 30 years since I made the trip, and last month saw the 120th anniversary of Elsa’s birth – in Rome, on 24 March 1894, as Elsa Olivieri-Sangiacomo – it’s Elsa who’s the focus of my attention here.

I had been corresponding with Signore Dallapiccola and Respighi for two or three years at this point, intermittent letters to and from Elsa, and more frequent exchanges with Laura as Dallapiccola on Opera inched forward. Elsa’s letters consisted of two or three lines of typescript and a bold signature across the bottom of the page; Laura’s were detailed, usually several pages in length, friendly in tone. In person each lady proved the opposite: Laura riservata, Elsa bouncy and outward-going.

I had written to Elsa to say that I was going to be in Italy and asking for permission to come and see her; she asked me to ring when I was in the country and we would see what could be arranged. I did so and she said that she had been ill and was now bed-bound – she was 90, after all – but that she would make a special effort and get up to meet me; could I come to lunch tomorrow? The trains were in sciopero, on strike, at the time; I don’t know if the train from Viareggio to Rome always takes the best part of seven hours to cover the 400km involved, but that’s what I could expect the next day. I got a taxi to the station at 5 in the morning, climbed on the train and snored my way south.

From the station in Rome I grabbed a cab to via Giuseppe Montanelli 11a, 00195 Roma (even today I remember the address from having typed it on numerous envelopes. The first of many white-gloved servants opened the door, and there was Elsa in a wheelchair, waiting to greet me in her huge, marbled-lined apartment. I was doubtless hungry after my trip, she said; let’s have lunch straightaway, and so we went through to the dining room. Another white-gloved servant appeared with a huge bowl of pasta in a rich cheese sauce with huge chunks of ham and various vegetables. Elsa wasn’t hungry, she said, but we could talk as I ate. She was right: I was famished (I was thinner in those days than I am now!) and I powered through my plateful. As if by magic, the white-gloved servant re-appeared and Elsa easily talked me into a second helping. When he came in a third time, again bearing his bowl of pasta, I was stuffed but had a symbolic spoonful so as not to refuse Elsa’s entreaties. I managed to clear my plate, only just, when he swanned back in, now with the main course and put a huge chunk of meat in front of me. I had forgotten that I was in Italy, of course; the pasta was only the starter. Noblesse oblige…

I had done an Italian O-Level in my last year at school and so had enough for a basic conversation, falling back on French and German where my Italian vocabulary failed me (no Inspector Montalbano on the TV in those days to provide refresher courses); Elsa had some English but was happier in our macaronic Continental mixture, and we discussed her husband’s music. She was outgoing, full of life, quick to laugh, even flirtatious, and she was obviously happy to be talking to someone who enjoyed her husband’s music so much.

Towards the end of lunch Elsa’s niece, who served also as her secretary, arrived and we adjourned to a lounge for coffee and cognac. At one point she asked me that, if I didn’t know that la donna aveva novant’ anni, how old would I guess she might be. Jeez; what should I say? I fell back on a mixture of flattery and teasing: ‘Non mi sembra una giornata più vecchia che settanta cinque’ – to me she doesn’t seem a day older than 75 – and with a cry of ‘Simpatico!’ Elsa lurched forward in her wheelchair and threw her arms around me. Another servant had been lurking in the background; now, whenever I put my glass down, a white-gloved hand would appear over my shoulder and top up my cognac.

At one point I said to her that all we ever heard in Britain were the first two parts of the ‘Roman Trilogy’, Le Fontane di Roma and I Pini di Roma; did the less well-known works – like the cantata Deità silvane, the variations-set Metamorphoseon and the Concerto gregoriano for violin and orchestra, the latter two out-and-out masterpieces – also get outings around the world? She summoned another white-gloved servant and asked him to fetch her royalties print-out from the previous year. I don’t know if you’ve even been in a Jain temple in India, but in every direction you look there’s a corridor with a statue of the Buddha at the end of it, and it was the same in this vast apartment: marble corridors running off in every direction you cared to look, just no Buddhas in the distance. The servant arrived with the print-out, and Elsa leaned over the side of her wheelchair and, holding on to one end of the print-out, flicked the other away from her – and the line of paper went whirring off into the distance. You see, she said with a satisfied grin; it does get performed.

I have been to lots of unlikely places in my life, but I’ve spent only five hours in Rome, one of the more likely places you’d visit, and four of them were at Elsa Respighi’s; there was only one train back to Viareggio that day and I had to be on it. I left assuring her I would keep her informed of the progress of the book, and she in turn promised to offer every help to its author. As a keepsake she gave me three books, two of her own, the other, Ardendi vivo, a biography of her by Leonardo Bragaglia; her own biography of her husband, which sits on the desk beside me as I write, she inscribed to me ‘con viva simpatia’; it is dated ‘Roma 25-V-1984’.

A year or two later my author, obviously feeling less of a sense of obligation than I did (and still do), decided to pursue other interests and dropped Respighi. I wrote to Elsa to inform her and assured her I would try to find someone else to write the book. I did find another author, but he fell an early victim to AIDS. Elsa herself died on 17 March 1996, only a week before her 102nd birthday. And not only have I not made good my promise to bring out a life-and-works study of Respighi from Toccata Press; no other English-language publisher has done so either – an incredibly poor state of affairs, given the popularity of at least some of his works. Opus est!

I run the CD label Toccata Classics and publish books on classical music as Toccata Press; I also write a bit about music in various publications in Britain and abroad. My degree (from the University of St Andrews, in 1977 – I’m a Scot) was in mediaeval French and German, and thereafter I worked in economics for twenty years, in London and Paris; I’ve been back in London since 1997. The main thrust of the postings in this blog will be in classical music, but since I am a secular liberal and free-marketeer with a healthy contempt for politics (economics is the study of the creation of wealth, and politics is the process by which it is wastefully dispersed) and a guarded resentment of religion, please don’t be surprised if I occasionally thump the tub on issues other than forgotten composers and other aspects of the musical world.
Categories : Editorial, News, Toccata Press
Previous Post →
← Next Post