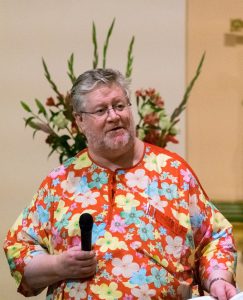 Martin Anderson, the founder of Toccata Classics, is – not to put too fine a point on it – quite a big bloke. And over the next few months he is going to try to convert his large belly into music. From the end of August until the end of the year he will be going on a Sponsored Slim – trying to lose as much weight as possible in order to raise money for Toccata Classics and its many recording plans, including the big ‘Music For My Love’ project of music written in memory of his late fiancée, Yodit. The idea is that you pledge as much or as little as you like per pound lost over that four-month period. Fill in the details below and early in the New Year we’ll e-mail you with a notification of the amount you owe and an easy click-to-pay system to minimise hassle.

What can we expect?

You might want to know that in 1980 and then again in 1982 Martin went on two Sponsored Slims for musical charities, on each occasion for the two-month duration of that year’s Proms season, and on the first occasion he lost 32 lbs and on the second 30. He is hoping his weight loss will be much more than that this time around. Martin’s starting weight is 363 lbs.

Why a Sponsored Slim?

In 2005 Martin launched the recording label Toccata Classics, which is dedicated to presenting unfamiliar composers and their music to music-lovers, and in the eleven years since then Toccata Classics has released almost 300 albums, every single one of them bringing first recordings to the market. But specialising in neglected music is not a highway to riches, as you can imagine, and Toccata Classics has never managed to generate the capital to launch any really adventurous recording projects – the funding always has to be found externally. Not every publisher is prepared to lower recording fees, and the preparation of new editions of old scores can involve costs of a kind that prevent ideas getting off the ground. So, apart from its obvious desirability for Martin’s health, he is hoping that this Sponsored Slim will bring in funds to help him to initiate more recording projects and allow you to hear more of the wonderful pieces of music that have lain unheard until now.