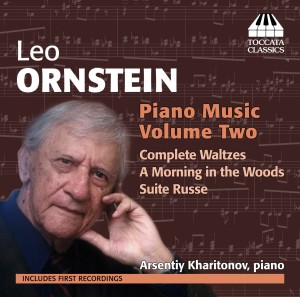 The Russian-born American pianist-composer Leo Ornstein (1893-2002) lived long enough — an astonishing 109 years — to see his music both fall into and re-emerge from obscurity. With his earliest surviving work dating from around 1905 and his last from 1990, Ornstein's music naturally embraces a range of styles, extending on this second CD of his piano music from the Rachmaninov-like Suite Russe (1914) to the brittle but urgent Impressionism of A Morning in the Woods (1971). The meat of this disc is the extraordinary sequence of seventeen Waltzes Ornstein composed, largely in the 1960s and '70s, which vary from the sexily languorous to the boldly tempestuous, requiring the fearless virtuosity that Arsentiy Kharitonov brings to them here. 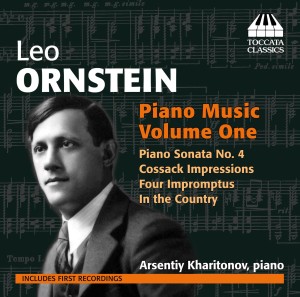 The Russian-born American composer Leo Ornstein (1893-2002) lived long enough — an astonishing 109 years — to see his music both fall into and re-emerge from obscurity. His earliest surviving work dates from around 1905; his last was composed in 1990. Not surprisingly, his music embraces a range of styles, ranging on this first CD — in the first extended series devoted to his piano works — from the atmospheric impressionism of the Four Impromptus via the fiery virtuosity of the Fourth Piano Sonata to the Rachmaninov-like Romanticism of the Cossack Impressions and In the Country. 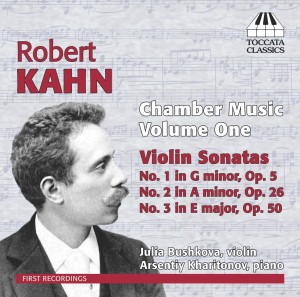 Robert Kahn, born in Mannheim in 1865, produced a large body of gloriously attractive chamber music, expertly crafted and basically Brahmsian in style. His three violin sonatas, written over a twenty-year-period at the end of the nineteenth and beginning of the twentieth centuries, reveal a lyrical composer in the Romantic mainstream but capable of considerable formal inventiveness.